Advertisement
The Newspaper for the Future of Miami
Connect with us:
Front Page » Transportation » Miami, state to partner on 30-acre park under I-395 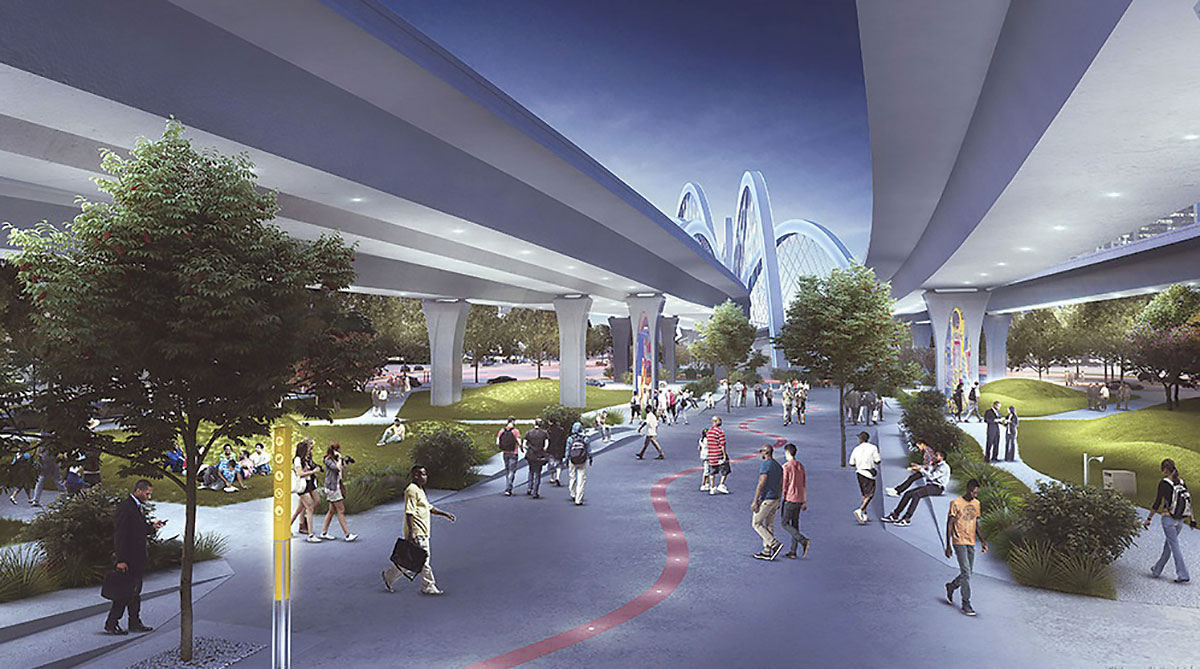 The City of Miami is preparing to partner with the Florida Department of Transportation (FDOT) in the development of the space under I-395 in Downtown Miami.

Legislation to approve the first agreement is scheduled for today’s (2/28) city commission meeting.

Last fall, FDOT’s James Wolfe met with commissioners and announced the start of construction on the long-awaited I-395/SR 836/I-95 project, including a “signature bridge” near the Adrienne Arsht Center.

Mr. Wolfe said the transportation department was looking to the city to develop and run a 30-acre illuminated park under a rebuilt and elevated I-395 and the new bridge.

An added benefit to an improved freeway system spanning the urban core and taking traffic to Miami Beach via the MacArthur Causeway is the plan to reconnect several areas to a growing downtown. That would include Overtown, Edgewater and the Omni neighborhood, which is being transformed into the art and entertainment district.

State transportation officials are looking to the city to handle the new open spaces below the raised roadbeds.

The resolution to be considered today would authorize the city manager to execute an agreement with FDOT “for the City of Miami to collaborate in the development and coordination of the I-395 Heritage Trail/Signature Bridge Underdeck Project” along I-395/State Road 836 between Northwest Third Avenue and Biscayne Bay.

A background memo by city staff says FDOT will be doing a design/build of the I-395 Signature Bridge project and the open space below. As part of the design, the city will be looking at planning and programming the space below and working with FDOT to meet the city’s needs.

The proposed agreement sets a timeline of when elements such as conceptual design, and maintenance and operations plan will be provided to FDOT. The agreement also lays out a working relationship and understanding of roles as well as preparing for additional agreements to come, the memo says.

The resolution notes that FDOT has jurisdictional ownership of I-395/State Road 836, and FDOT “will plan, design, and construct the I-395 Signature Bridge, the community enhancements below I-395 (Underdeck Enhancements), and highway capacity improvements which are intended to improve mobility and safety in the surrounding area.”

It also says: “FDOT will grant the City non-exclusive jurisdiction pertaining to the Underdeck Enhancements for the purposes of all zoning, planning, permitting, and operation thereof; and … the City will provide FDOT with the conceptual design of the Underdeck Enhancements to be mutually agreed upon by FDOT and the City, including… the preferred location and placement of certain improvements and utilities.”

FDOT will be responsible for the construction of the Underdeck Enhancements based on city-provided designs, it says.

The resolution concludes noting that the state and city have determined that it would be in the best interest of the public to enter into the agreement, formally establishing a relationship to perform the development services and establish general design, construction, budgetary, management, maintenance, and schedule parameters to guide the development of the signature bridge project.

The FDOT project has its own website at www.i395-miami.com.

On a page showcasing possible design elements for the underneath open spaces, FDOT notes it “is committed to building the proposed common spaces and is actively working with our local agencies to identify partners to operate and maintain them.”

The $802 million project is funded by the state transportation department ($616 million) and the Miami-Dade Expressway Authority ($186 million).

It will include a double-deck stretch to handle local traffic on the ground and Miami Beach-bound traffic on the upper level, as well as changes to State Road 836 and the addition of one lane to the northbound entrance to I-95.