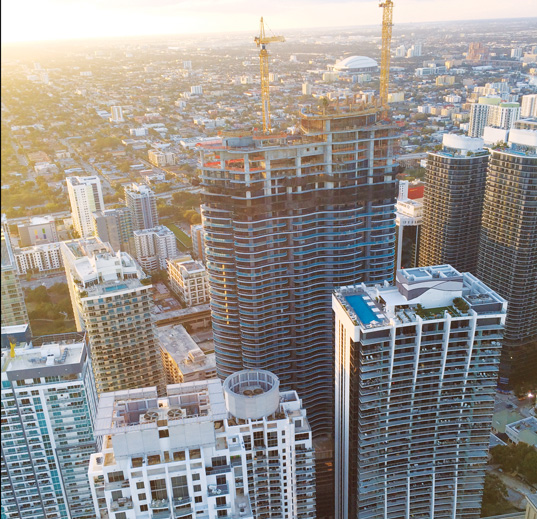 In Miami’s overbuilt high-end condominium market, a complex game of cat-and-mouse is being played, as sellers try to push their advantage and buyers shop for bargains, observers say.

“The No. 1 metric in our industry to measure the health of the market is the number of remaining months of supply: today’s inventory divided by the average number of monthly sales,” said Ron Shuffield, president and CEO of EWM Realty International, via email. “The remaining supply of Miami-Dade condos priced at $1 million or more reflected 57 months’ supply (based upon fourth quarter 2018 sales). The optimum supply for properties priced in excess of $1 million ranges from 12 to 18 months. This over-supply, of almost a five-year inventory, will continue to place pressure on pricing.”

“We believe that we have more pent-up demand for luxury housing across Miami-Dade County today than we have ever had in history, but potential buyers are very knowledgeable about our current trends, and will continue to be very value-focused,” Mr. Shuffield said. “The high months of supply numbers going into 2019 point to many opportunities for prudent buyers and ‘right-priced’ sellers of luxury condos across Miami-Dade County.

“We are poised for an increase in the number of condos to be sold in 2019, but initial ‘right-pricing’ is going to be a critical element of each potential buyer’s motivation,” he said. “The average sale price for condos sold in excess of $1 million has currently been averaging 83% of the average original asking price in this luxury price range.”

“The high-end condo market has softened,” said Neisen Kasdin, office-managing partner at Akerman LLP and vice chair of Miami’s Downtown Development Authority, “but some buildings are selling, including Paramount and Brickell Flatiron. There’s not a lot of new product that’s going to be introduced to the market soon,” keeping demand high even if sales are sluggish.

“In the high-end condominium sector, we are seeing a market with more certainty,” said Henry Torres, president and CEO of The Astor Companies, via email. His company is finishing Merrick Manor, a 227-unit luxury condominium development in Coral Gables,

“Prices are holding steady because many luxury residential buyers who might have been on the sidelines in 2018 are moving forward with purchasing decisions,” he said. “They understand that interest rates are only going to go up, existing inventory is dwindling and there are no new developments being launched – or will be launched any time soon. These buyers are acting now because options for them will dissipate as 2019 progresses.

“In Coral Gables, nobody is giving anything away when it comes to pricing,” Mr. Torres said. “In fact, we are seeing per-square-foot prices increase at new luxury projects that were recently announced. Coral Gables is experiencing dramatic overall growth, with large-scale commercial real estate development and expanded retail offerings fueling residential demand in a city that is already a coveted place to live.”

“What influences the high-end is over-building” said Jeff Morr, a broker-associate at Douglas Elliman Real Estate and chairman of the Miami Master Brokers Forum. “Luxury condos in Miami are built for millionaires and billionaires, which the majority of people are not.”

“I think this year is going to be better than last year,” Mr. Morr said. “Armani, 1000 Museum, and Park Grove are all going to be delivered, and the level of quality is unrivaled. The prices are reasonable. Miami is still undervalued compared to other cities around the globe.”

Mr. Morr said he is involved in deals in Tel Aviv and in Cabo San Lucas, which carry the asking price of $1,000 to $2,000 per square foot. “You can still buy on the beach for $1,000 per square foot. The market is going to tighten because a lot of New Yorkers are looking to homestead in Miami, because of the tax issue. Everyone wants to develop in Miami. At the end of the day, the value is there.”

“What we saw last year was a healthy slowdown,” said J.C. de Ona, Centennial Bank president for Miami-Dade County. “The US dollar was strong, there was a difficult political environment in some Latin American countries, and interest rates are continuing to go up.”

The luxury condo landscape has changed considerably since the pre-2008 boom, and for the better, Mr. de Ona said. “We’re not seeing investors flipping condos anymore; developers are requiring more upfront, including some deposits of more than 50%. With so much equity in the market, that’s obviously a good thing.

“There is an oversupply today, but with fewer ground-breakings for new buildings, that will be absorbed. Developers are holding back, rather than continue to add to the over-supply.”

Despite market fluctuations, Miami’s value remains strong, Mr. de Ona said. “Architects and designers all want to create new buildings here; it’s almost a competition. It’s like a trophy, to have a unique building that’s part of the Miami skyline. And Miami’s skyline is beautiful.”

“The upper-end condo market is broken down into three segments: preconstruction, newly completed buildings, and resales in older buildings,” said Michael Neumann, director of sales at BH3, the real estate investment and development firm that is selling Privé at Island Estates in Aventura, via email. “All three markets are seeing good traffic, but not a lot of sales, each, for different reasons. There is one common thread with all three: the potential buyers are all high net-worth individuals, looking for second or third homes with no urgency and a sense that since the market is slow, there is no rush to act. There are a lot of offers being made, but they are low offers in an attempt to get what they perceive as a deal. In a lot of cases, these offers are not accepted,” he said. “Sales volume is down across all segments.

“In the preconstruction market, most developers are tied to construction loans and can only lower prices by a small percentage because of the terms in their loan agreement,” he explained. “This market remains healthy, as most buildings are anywhere from 65% to 80% sold. When factoring in time to complete the building versus the number of units left, only a small amount remains to be sold over an extended period. Most aren’t lowering prices by more than a few percentage points.

“In the segment of newly completed projects, where the developer may have some units left to sell, this is a different scenario from building to building, each depending on the amount of re-sales listed,” Mr. Neumann said. “Some buildings have as many as half units back on the resale market. The developers’ own purchasers become their direct competition. If someone lists at a very low price, it forces others to compete. Lowering of prices are occurring here but not a lot of sales, as the buyers sense a better deal may come later since so many units are listed and someone might discount further. Sellers are high net-worth individuals. Most, while wanting to sell, don’t need to sell, so they don’t get desperate and give their investment away.

“At Privé at Island Estates, only 10% of units are on the resale market (which is the norm in a healthy market), with half being priced higher than the remaining developer units. This is because the building was targeted to end-users and not investors. In this instance, the resales are actually helping the developer as they are driving more traffic to the building.”