Advertisement
The Newspaper for the Future of Miami
Connect with us:
Front Page » Profile » Steven Sonberg: Steers fast-growing Holland & Knight amid legal changes 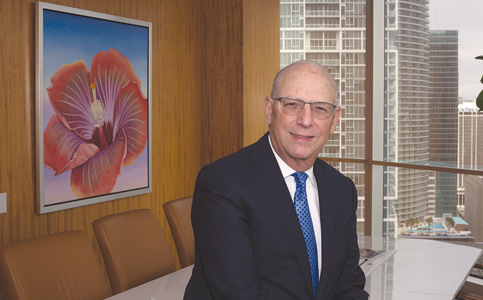 As managing partner at Holland & Knight, Steven Sonberg oversees the operations, growth and direction of the firm, which boasts 1,400 attorneys at 28 worldwide locations, including international offices in London, Mexico City and Bogotá, Colombia.

Mr. Sonberg, a longtime Miami resident admitted to the Florida Bar in 1972, last year entered his third – and, according to him, final – five-year elected term as CEO of the 51-year-old firm, which he joined in 1992.

“My professional life is divided into periods of time where I was doing work for clients and when I took the job as managing partner,” he said. “[When I became managing partner], I said, ‘I now [have] only one client: the law firm and my partners [there].”

His leadership during the last decade helped steer Holland & Knight through a turbulent economic downturn and reach record heights, including increasing the firm’s gross revenue from $606 million in 2008 to $915 million last year – an 8% increase from the year prior – and marked expansions of the firm’s roster and global footprint.

“My greatest professional achievement is we’ve been able to accomplish for the firm,” he said, adding that Holland & Knight’s success was hardly the due to his efforts alone.

“This is ‘we,’ not ‘I’ – the people who worked with me in reshaping the firm, charting our direction, surviving the downturn of [2008-10] and developing and executing the plans we had [going] forward.”

Mr. Sonberg sat down with Miami Today reporter Jesse Scheckner. The interview, recorded by Jahmoukie Dayle, can be found Friday at http://bit.ly/2uNHy0Q.