Advertisement
The Newspaper for the Future of Miami
Connect with us:
Front Page » Government » Miami Yacht Show gets land use OK, funds baywalk 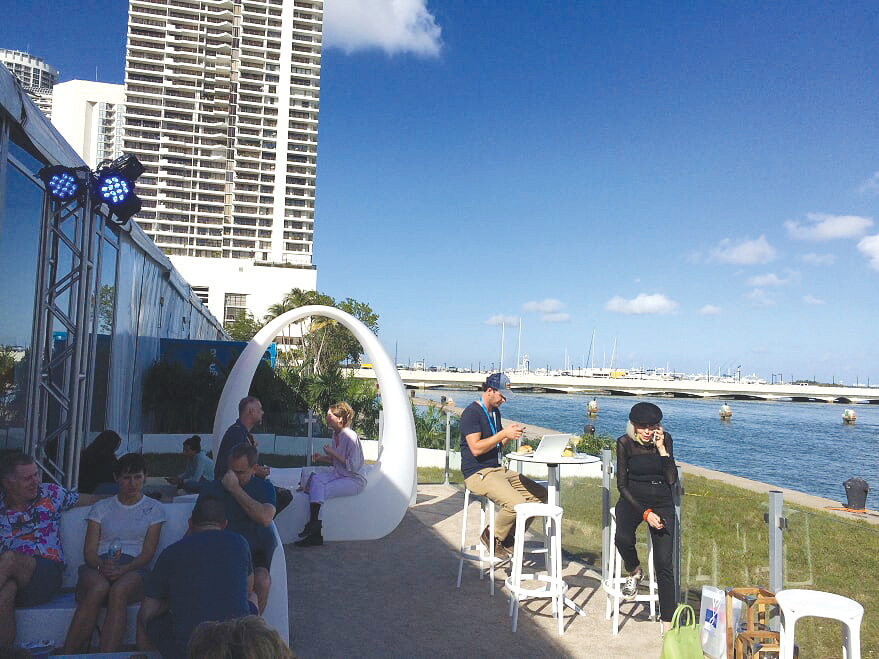 Miami city commissioners have approved a revocable license with Yachting Promotions Inc., the operator of the Miami Yacht Show, to use city-owned submerged lands between the MacArthur and Venetian causeways.

This will allow the yacht show to move from Miami Beach to this new location in Biscayne Bay, the waterfront connected to the former site of the Miami Herald.

Yachting Promotions Inc. helped sweeten the deal by committing to a $150,000 one-time payment to the city to establish a temporary public baywalk along the 1 Herald Plaza site.

The property is in Commissioner Ken Russell’s district, and he has pushed for completion of the baywalk for years. He mentioned that a prior agreement with another user of the upland site to install a temporary baywalk unfortunately did not materialize, and this new deal is a chance to help install a baywalk to fill in “one of the longest missing pieces” in the growing public walkway along the shore.

Mr. Russell worked with the yacht show producers to get the $150,000 contribution.

After 30 years at Indian Creek waterway in Miami Beach, the plan is to move the annual show to Miami.

The Miami River Commission, a body that has the marine industry as a top priority, recommended city approval of the license.

Spencer Crowley, an attorney representing Yachting Promotions, said the yacht show has outgrown Miami Beach, noting that the size and quantity of yachts has led to the new location.

The waterway of Biscayne Bay, framed by Downtown Miami, is a deep water port and well suited to become the new home for the show, he said.

Vessels are typically 80 feet long, with some extending more than 150 feet, he said.

The site, adjacent to the Omni Metromover Station and a hub for public transit buses and trolleys, offers yacht show patrons easy access.

Mr. Crowley said the show operators are working through steps necessary for approval of the location. The Miami-Dade County Department of Environmental Resources Management approved a permit in October, he said.

At the high-profile site, the city owns about 18 submerged acres while Resorts World Miami LLC owns the upland property.

The yacht show has an agreement with Resorts World to use part of the upland in tandem with Art Wynwood at 1 Herald Plaza at 14th Street. The yacht show is held in February, when another company stages the Miami International Boat Show on Virginia Key.

Gov. Rick Scott and the Florida Cabinet are to consider the new location for the yacht show next week. The Florida Department of Environmental Protection is recommending approval of a “submerged land lease” during a Nov. 30 Cabinet meeting.

The proposed lease area is in the Biscayne Bay Aquatic Preserve and controlled by the state.

The show would include a temporary docking facility that would display 634 vessels. The proposed lease area would have 208 vessels, while nearby areas controlled by Miramar Marina Corp. and the City of Miami would have the remainder.

The US Army Corps of Engineers must OK the move as well.

The relocation must be evaluated by considering environmental impacts related to everything from manatees to seagrass and coral.

While the license is temporary, Mr. Crowley indicated to river commission members that after staging a successful 2019 show the producers may talk to the city to seek something “more permanent.”

The yacht show boosts the local economy, with an estimated $486 million economic output generated by this year’s show, according to a recent study.

Genting Group purchased the former newspaper site in 2011 for $236 million. It also purchased surrounding sites and announced plans for Resorts World Miami, a $3 billion luxury casino with multiple towers, stores and more. Without winning state approval for a casino, the plan was scaled back to two residential towers, a hotel and retail, but nothing has been built.

Resorts World does have a 2016 proposal to build a 50-slip marina there.