Advertisement
The Newspaper for the Future of Miami
Connect with us:
Front Page » Top Stories » Historic Olympia Theater in for a facelift

Historic Olympia Theater in for a facelift 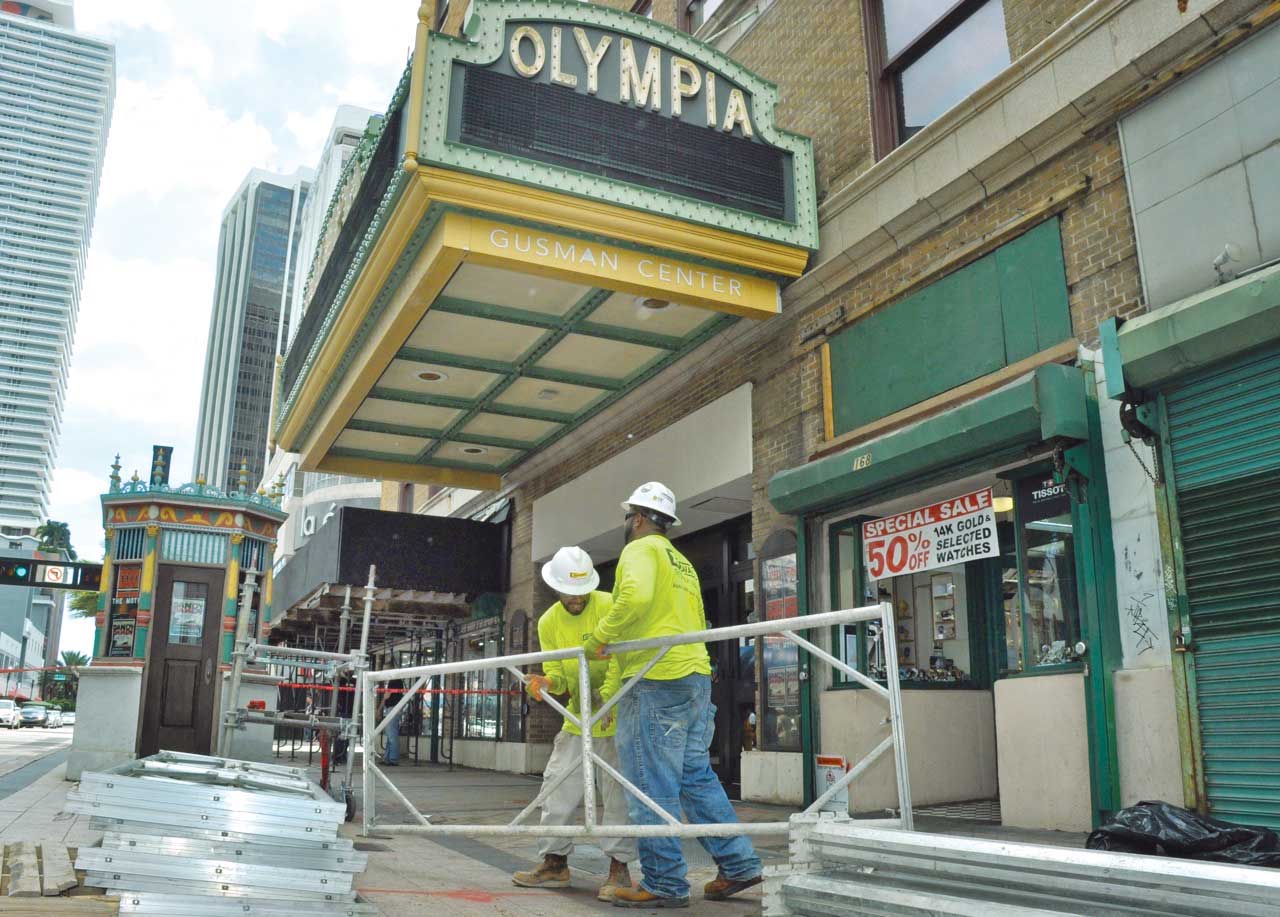 The historic Olympia Theater in downtown Miami is in store for a million-dollar facelift, with help coming from a sizable state grant.

The City of Miami owns the aging and grandiose Olympia Theater at the Gusman Center for the Performing Arts at 174 E Flagler St., which is managed by not-for-profit Olympia Center Inc.

At its meeting today (11/15), the city commission is to consider accepting a $500,000 state historic preservation grant.

The resolution allows execution of a grant agreement between Olympia Center Inc., as property manager of the city-owned theater and office building, with the State of Florida Department of State Division of Historical Resources for award of $500,000 to be used exclusively for the Olympia Theater Façade Restoration, Phase I.

In 2016 Olympia Center Inc. applied for matching funds from the state to begin the specialized, engineering analysis, documentation, design and construction document development to restore and repair the façade for the Olympia Theater and Office Building.

Background documents show the center worked with the City of Miami Historic Preservation and Grants Administration staff to complete the application for $500,000 from the state, to be matched by up to $1 million in existing funds from the city for the first phase of façade restoration.

For several months, city officials have been negotiating a deal that could result in Miami Dade College taking over operation of the theater. Those negotiations are ongoing.

Phase I of the restoration is described in the grant agreement with the state: “Grant funds will be used to restore the approximately 29,400 square foot facade of the Olympia Theater and Office Building … as the first phase of a multiple phase project. This phase of the project entails the development of a complete set of construction documents suitable for bid and permitting purposes for the restoration of the structural system and the exterior facade of the building, including preliminary evaluation of existing conditions, stabilization work, research of historic documentation, and preparation of construction drawings and a bid package. Grant funds will also be used for grant administration and project management.”

The Olympia Theater opened in 1926 as a silent movie palace and the city’s first air-conditioned building, and was donated to the city as a cultural arts facility by the Maurice Gusman family in 1975. The theater was named to the National Register of Historic Places in 1984.

Although the auditorium has undergone renovations over the years, the entire building has seen better days, including some 80 apartments on the floors above the theater and the brick exterior.

While the iconic venue continues to host concerts and other large events, the property needs work.

Renewed interest in the building surfaced last year when a developer’s unsolicited proposal sought a public-private partnership with the city to redevelop the residential units and improve the theater.

In the face of concerns and controversy that the offer triggered, the developer withdrew the proposal in late October 2017 and commissioners asked the administration to study what would be needed to fix the building and to look at its future uses and management. The emphasis should be on historic preservation at the outset, said Commissioner Ken Russell. The theater is in his district.

At a meeting in April, the commission directed City Manager Emilio González to explore the feasibility of a partnership with Miami Dade College (MDC) for operation of the theater. The move was initiated by Mr. Russell, who also suggested the city consider spending $15 million to $20 million from a recently approved general obligation bond package to restore the façade of the theater.

Mr. Russell’s resolution in April directed the city manager “to explore the feasibility of a potential partnership with Miami Dade College for the operation of the Olympia Theater, including housing options for MDC students.”

The resolution noted that MDC has successfully managed the civic and cultural programming and operations of other historic assets, including the Koubek Center and city-owned Tower Theater in Little Havana and the Freedom Tower downtown.

The idea of turning to the college originated at the Downtown Development Authority. Mr. Russell chairs the authority’s board.

He said the DDA created a taskforce to consider the theater’s fate, and out of that work came the idea to sit down with college officials and discuss a possible partnership.

The possibility of a long-term management agreement with the college garnered support from the community.

One Response to Historic Olympia Theater in for a facelift