Advertisement
The Newspaper for the Future of Miami
Connect with us:
Front Page » Real Estate » Hotel on Miami River to be made of shipping containers

Hotel on Miami River to be made of shipping containers 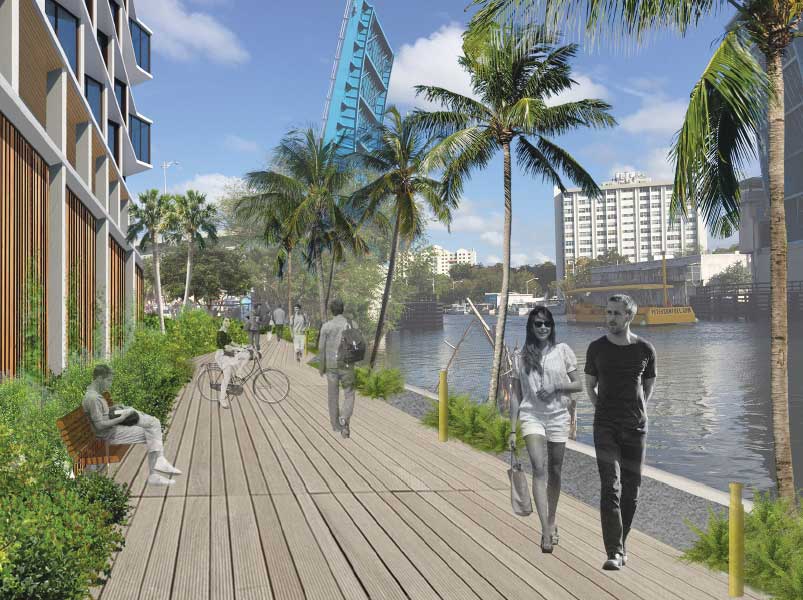 Investors are advancing a plan to build a boutique hotel on a vacant lot on the Miami River, with an adjacent food plaza offering dining options. On Monday, the Miami River Commission unanimously recommended city approval.

The conditional approval directs the owner-developers to come back to the river commission when the project is more defined.

The site is on South River Drive, between the Southwest First Street Bridge and West Flagler Street Bridge. The lot is across the street from Neo Lofts, a 199-unit residential tower opened in 2004.

The project is to be called The Shipyard On The River, with 50 hotel rooms in a six-story structure made from shipping containers.

This is the evolution of a project first proposed in 2015 by property owner Arturo Ortega, according to river commission officials.

At Monday’s meeting, one of the investors, Levy Gomez Martinez, spoke of his desire to develop something special on the river, what he called a beautiful place.

Mr. Martinez said he is from Cancun and moved to the Miami area about seven years ago. He said he fell in love with Miami, and would like to see the riverfront developed like the waterfront in Chicago and San Diego.

Of his site on South River Drive he said they hope to “go as green as possible,” with the goal of leaving the property better off than when they started.

River Commission Chair Horacio Stuart Aguirre said it’s not often the commission hears from a developer that they plan on only six stories when they could go 12, asking Mr. Martinez: “Why should we believe you?”

Later, Mr. Aguirre said he loves the name for the project. Mr. Martinez said it is in part to reflect all of the various uses along the working river, “to embrace all that’s going on.”

A resident spoke to the commission in opposition to the proposal.

Michael Larrea, who lives at Neo Lofts, said he’s not against development in general but this planned hotel is too high.

Mr. Larrea said there is a lot of potential on the vacant site for a series of “little stores,” not tall structures.

Mr. Aguirre asked how many stories Neo Lofts tower is. The building is 21 stories.

The Shipyard proposal was discussed Oct. 19 by the commission’s Urban Infill and Greenways Subcommittee.

At that meeting it was noted the river commission, about three years ago, considered a preliminary proposal for this site, and recommended approval of a side yard building setback adjacent to city-owned 1 SW South River Drive, and in return the developer would make park improvements to the public greenspace, including a needed new seawall and public riverwalk, and maintain the public greenspace in the future. The proposal also included a waiver of the building setback from the street, in order to not reduce the waterfront building setback.

The latest proposal includes a commitment from the developers to improve and maintain the city-owned lot as Flagler Cove Park, in exchange for waivers allowing zero setbacks on the street side and north side yard, and an 8-foot setback on the south side yard. This would also include an improved and landscaped riverwalk.

Committee Co-Chairman Jim Murley on Oct. 19 commended a draft design of the hotel, noting its elevated posture, in light of sea level rise and flooding issues.

Mr. Murley suggested the river commission recommend approval of the conceptual plans for The Shipyard On The River.

A slide presentation said the number of options for food, lodging and entertainment in the city are significant, but the options for family-friendly, trendy venues are quite limited. Furthermore, the lodging alternatives around the Miami River are extremely limited.

“The Shipyard is born as an alternative to fill this gap and to cater to tourists and locals alike, and is the brainchild of a group of friends and investors with extensive experience in the hospitality industry,” the presentation said.

The presentation describes the business concept this way: “The project landmark consists of a hip boutique hotel with rooms overlooking the Miami River, using the latest design trends in shipping container conversions.”

It goes on, “The project includes a sophisticated social environment, including a variety of gourmet food options with a central dining area ‘picnic style.’”

The presentation is summed up: “We will be a family oriented hotel with a deep and constant ecological sense, making sure the integrity and cleanliness of the river and our surroundings to be maintained at all times.”

On the topic of noise, it says, “We want to create a space fit for the family and always taking care of our guests’ tranquility and peace. In order to do that, we will make sure volume will never be a problem.”

“Very exciting,” Mr. Aguirre said after the vote. “We appreciate your investment in our community.”