Advertisement
The Newspaper for the Future of Miami
Connect with us:
Front Page » Transportation » Cross Bay Express trolley is a passenger-carrying reality 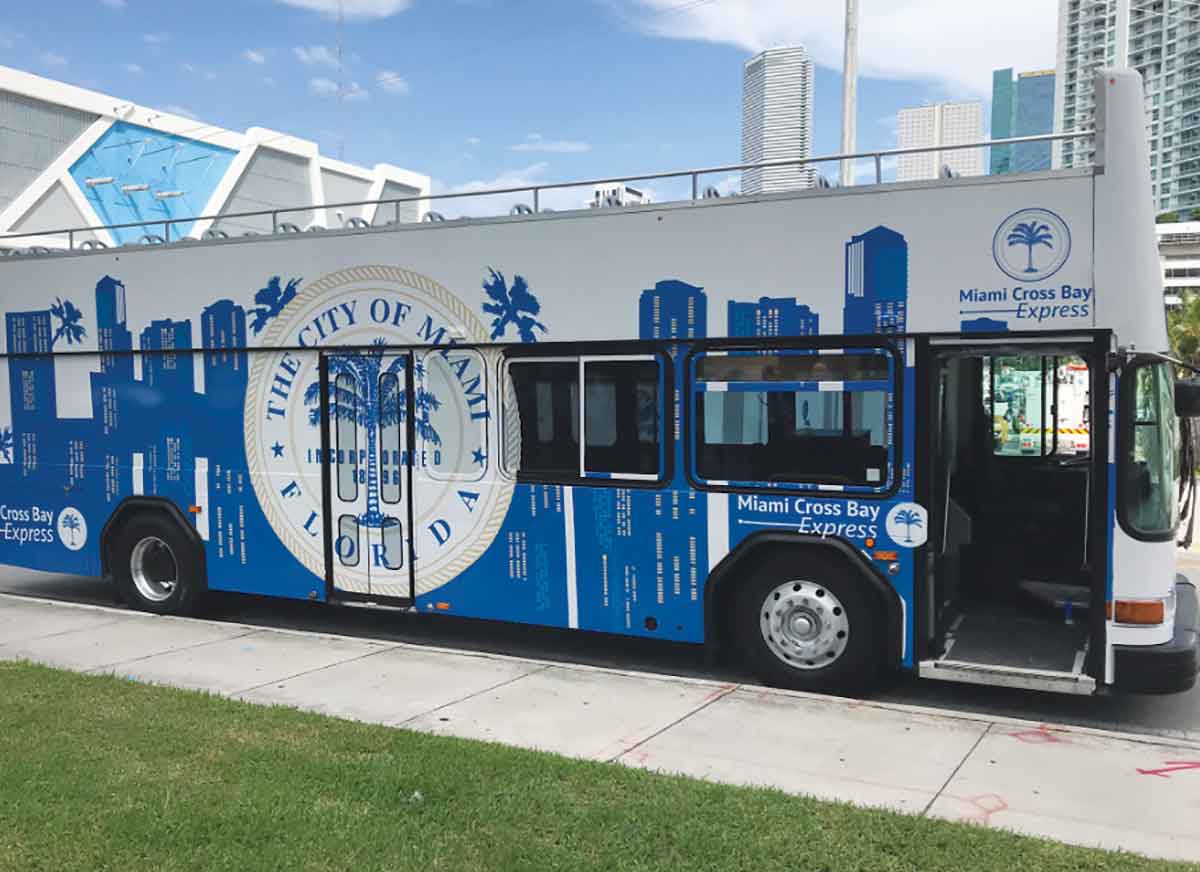 The City of Miami’s new Cross Bay Express trolley is a reality.

City elected leaders and officials are touting the service as another important transportation alternative in the region where easing traffic gridlock is a top priority.

City and Miami-Dade County representatives took an inaugural ride Oct. 18, starting from Bayside Marketplace in Miami, traveling east via the MacArthur Causeway to Miami Beach, and back to Bayside.

The new service – the only city trolley that costs money to ride – launched about five weeks later than originally planned.

In late September, city officials said the tentative start date was moved to mid-October citing a few details the city was still working on with the vendor including the “wrapping” of the vehicles.

The vehicles are not city owned but were being outfitted with wrapping that displays the city logo or seal and identifies the buses with the brand: Cross Bay Express.

City of Miami leaders have worked for some time to secure a regular public transit connection to Miami Beach.

The city is committed to offering an inexpensive and convenient express service that is accessible and sustainable, said Eugene Ramirez, director of the city’s Office of Communications.

“A convenient link between Miami and Miami Beach has been much talked about, and we’re proud to make it a reality,” he said.

Miami Mayor Francis Suarez, City Manager Emilio González, Commission Vice Chairman Ken Russell and others gathered Oct. 18 at 401 Biscayne Blvd., the main entrance to Bayside Marketplace, to take the first ride on the trolley to Miami Beach and back.

City officials said the launch is yet another step in providing mobility solutions to make Miami a more resilient city.

The buses are to run from noon to midnight daily at 30-minute intervals, seven days a week.

The fare is $5 each direction.

For the new trolley route, METC offered the city three double-decker buses that can each carry 66 passengers, which is more than double the capacity of the typical city trolley.

At full capacity, each bus can accommodate 3,000 daily boardings.

The deal is for one year with an option to renew for two additional one-year periods.

Some city commissioners approved the new route only after getting assurances from administrators that the added service won’t cost the city any money.

Mr. González has said it is considered a “for pay” service ¬– covering its costs – and “should that not happen, we would terminate.”

While the city’s fleet of smaller trolleys, designed like old-fashioned streetcars, does have various amounts of wrapping that includes advertising, the Cross Bay Express vehicles will not, according to city officials.