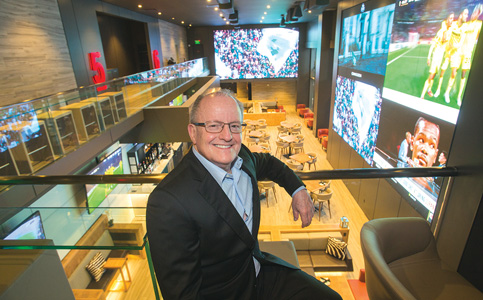 As CEO of CMX Cinemas, the North American subsidiary of Mexican cineplex corporation Cinemex, José Leonardo Martí has led an aggressive expansion campaign that since 2016 has seen the company develop into the eighth largest movie theater chain in the US.

Those numbers will increase next month, when CMX opens its first New York City location, and will continue grow further with expansions in Florida, Georgia, Illinois and New Jersey.

“We want to offer the best seats, the best technology, the best environment and very good food and cocktail service,” he said. “[But] you can’t have a cookie cutter [model] and apply it everywhere. It has to fit the community.”

Better home theaters may affect other cineplex companies whose customers may opt for a night at home over braving a potentially unsatisfactory movie-going experience, but Mr. Martí said CMX, with its numerous VIP accompaniments, faces no such issue.

“In your house, you can have very big screens, but nothing like [ours],” he said. “We offer better screens, better sound and the same or better seats, food and cocktails. That’s the main strategy. In the traditional theater, if you don’t offer anything more than what [customers] have in [their houses], [they] will stay [at home].”

An economist by training, Mr. Martí began his career in banking. For 20 years, he worked at Citibank and Scotiabank in México, after which he joined Grupo México, the nation’s largest mining corporation, which also invests substantially in transportation infrastructure through its Ferromex division.

Three years into his work with Grupo México, he was asked to head the company’s then-new theater brand, Grupo Cinemex.

Before becoming CEO for CMX, Mr. Martí served as Grupo Cinemex’s CFO and CEO, as well as CFO for Latin America Movie Theaters where, under his guidance, the company acquired almost 500 screens, becoming the second-largest movie theater company in México. From 2015 to 2018, he also presided over México’s National Chamber of the Cinematography Industry.

Mr. Martí sat down with Miami Today reporter Jesse Scheckner at CMX at Brickell City Centre, the company’s first US location, which celebrated its first anniversary in June. The interview, recorded by Jamoukie Dayle, can be found Friday at http://bit.ly/2uNHy0Q.