Advertisement
The Newspaper for the Future of Miami
Connect with us:
Front Page » Top Stories » Florida Department of Transportation asks city to run 30-acre park under bridge 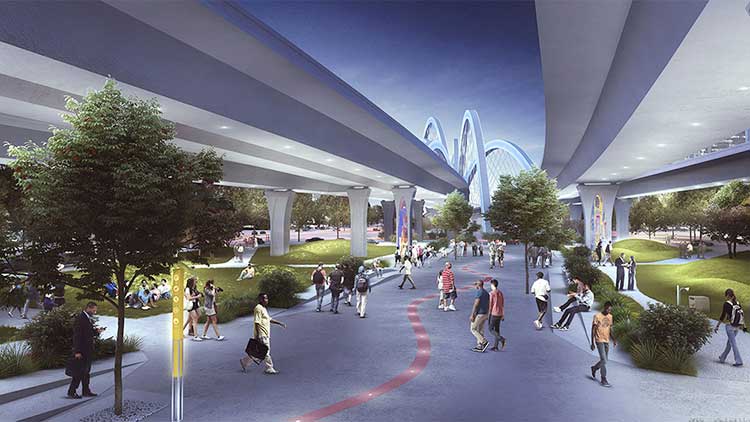 The Florida Department of Transportation is looking to the City of Miami to develop and run a 30-acre illuminated park under a rebuilt and elevated I-395 and its long-planned “signature bridge.”

James Wolfe, who heads the state transportation department for this area, reported on the project to Miami city commissioners Oct. 11.

People focus on the signature bridge, he said, “but there is a lot more to the project.” The elevated roadway will bring more connections for the neighborhoods and many new “under deck area opportunities.” He said land under the freeway can be a world-class public space.

An added benefit to an improved freeway system spanning the urban core and taking traffic to Miami Beach via the MacArthur Causeway is the plan to reconnect several areas to a growing downtown. That would include Overtown, Edgewater and the Omni neighborhood, which is being transformed into the art and entertainment district.

State transportation officials are looking to the city to handle the new open spaces below the raised roadbeds.

“DOT needs a partner, and the logical partner is the city,” Mr. Wolfe told commissioners. “We have had opening discussions,” he said of state and city representatives. But he noted there’s no rush to seal a partnership for the open space because construction is to take 4½ to 5 years.

“No,” answered Jacqueline Sequeira with the transportation department. “It will be built.”

The $802 million project will be funded by the state transportation department ($616 million) and the Miami-Dade Expressway Authority ($186 million). It will include a double-deck stretch to handle local traffic on the ground and Miami Beach-bound traffic on the upper level, as well as changes to State Road 836 and the addition of one lane to the northbound entrance to I-95.

The new road itself is a suspension bridge over Northeast Second Avenue and Biscayne Boulevard crowned by six rainbow-shaped, 330-foot arches.

Commissioner Manolo Reyes cited concern about maintenance costs to the city if it managed the 30 acres. “It has a cost and we need to be financially responsible,” he said.

“You have no obligation to take it on,” responded Mr. Wolfe. He quickly pointed to expected revenue-producing opportunities on the land, perhaps through public-private partnerships. As examples he mentioned a coffee shop, limited parking, or a farmer’s market.

“Some of that [maintenance] cost can be offset,” Mr. Wolfe said.

The project is in Ken Russell’s District 2. “To me this is very exciting. I’m an optimist,” he said. “I see a new type of park here… providing a major opportunity for connection.”

He said stakeholders should work hard to ensure “this magnificent park is connected to our magnificent baywalk – they’re so close.”

Preliminary construction is due this month and in November, with major work to begin in February and March. Construction will be in phases to minimize impact to the public.