Advertisement
The Newspaper for the Future of Miami
Connect with us:
Front Page » Profile » Katherine Fernandez Rundle: Innovative programs during 25 years as state attorney 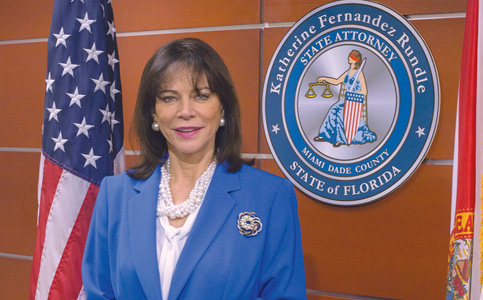 For Miami-Dade State Attorney Katherine Fernandez Rundle, 2018 marks a quarter-century as the county’s top law enforcer in the largest prosecutor’s office in the state and the fourth largest in the nation.

Ms. Fernandez Rundle is the county’s third state attorney, succeeding Janet Reno and Richard E. Gerstein, but her tenure is decorated with a myriad of firsts.

The first Hispanic state attorney for Florida and a member of the Florida Women’s Hall of Fame, she helped write and pass the Florida Punishment Code and was key to forming community programs for issues including domestic violence, victim’s rights, teen truancy and child support.

In 2006, through a broad partnership, she created the “Second Chance” Seal and Expunge Program. In 2012, she launched a coalition of law enforcement agencies to combat human trafficking and in 2017 created the Miami-Dade Veterans Court.

She said she and her staff of almost 1,300 – including about 330 lawyers and 400 child support professionals – are up to the task.

“Those [who] have worked here would say it’s the best job they’ve ever had,” she said. “You work with highly energetic [people]. They’re true public servants.”