Advertisement
The Newspaper for the Future of Miami
Connect with us:
Front Page » Transportation » Miami approves creating parklets in city parking spaces 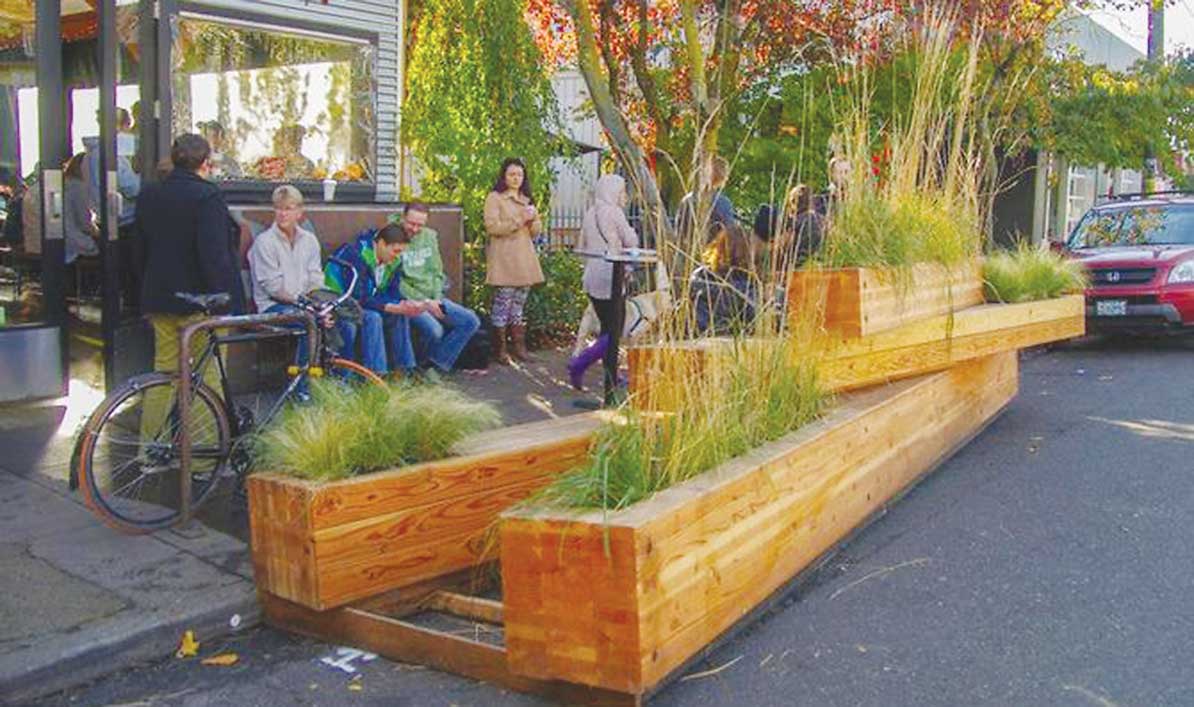 Miami city leaders are willing to try out a program designed to take back sections of paved street downtown devoted to parking and give it back to the people.

The Miami City Commission on a split vote of 3-to-2 on Sept. 27 approved a one-year pilot program for parklets.

The idea is to extend sidewalk depth and use the dedicated parklet space for people, from tables and chairs for an upfront and outside café setting for restaurants, areas to gather and socialize, display artwork and more.

The legislation was sponsored by Mayor Francis Suarez and Commissioner Ken Russell.

Mr. Russell was joined by Keon Hardemon and Wifredo “Willy” Gort in approving the pilot program. No votes came from Manolo Reyes and Joe Carollo.

Mr. Reyes had cited his opposition to taking away even one dedicated parking space for the pilot program. Mr. Carollo said parklets might work in small towns but not in growing urban cities like Miami.

“I’d not have a problem with this if we had enough parking spaces,” Mr. Reyes told his fellow commissioners. “And downtown, there is no place to park.”

Mr. Reyes said he’s also concerned about bringing people and activities closer to or next to moving traffic, creating a safety concern.

“I’m told it’s popular, but I wonder where? Timbuktu? It takes parking spaces away. It may be well intentioned but I think it’s a bad idea, and dangerous too,” said Mr. Reyes.

Mr. Carollo was quick to agree.

Mr. Carollo said his biggest concern is liability for the city, voicing worries about distracted drivers putting parklet patrons in jeopardy. “The liability would be humungous … it’s not good public policy,” he added.

Mr. Russell defended the parklets idea, saying they are very successful in other cities.

“Restaurants want this,” he said, and those businesses wishing to extend their sidewalks for parklets would pay the city a fee, generating some funds for the city.

“It could be used to create a mini park … it can be a creative space, or an active little green space,” he said.

The parklets must meet Department of Public Works standards and rules, he noted.

“Let’s give it a try,” encouraged Mr. Russell.

Mr. Carollo said, “This might work for a little town like Mayberry but not for a city of a half-million people, with the kind of driving we have … with new immigrants and tourists.”

He explained the parklets would extend the sidewalks out over and above the street level spaces.

“It’s well above the traveling lane. There’s no issue with people being run over,” said Mr. Ihekwaba.

The resolution passed by commissioners approves and establishes a one-year pilot program for parklets, to be administered by the city’s Department of Resilience and Public Works.

It establishes criteria for permitted locations, general physical requirements, fabrication, and construction and installation standards; provides for an application fee; establishes a process for the evaluation and review of applications; requires execution of a parklet permit; delegates authority for parklet permits to the city manager; and sets a maximum of five parklets under the pilot, subject to the authority of the city manager for authorization of an additional five parklets.

A background memo describes parklets as “semi-permanent decks that expand the pedestrian realm beyond the sidewalk into a parking lane, allowing adjacent business owners to provide outdoor seating, without the need for permanent street re-design and construction.”

Parklet areas may include elements such as tables and chairs with or without food and beverage service, planters, and other associated improvements, generally in front of and developed and operated by an adjacent business.

The parklet concept was developed in San Francisco. Its success there has led to parklet programs in Oakland, Brooklyn, Philadelphia, Los Angeles, San Jose, Fort Lauderdale and other cities.

The memo says staff recommended a one-year pilot in areas that can benefit from enhanced pedestrian activity and improved streetscape design.

City Attorney Victoria Mendez said anyone seeking a permit for a parklet must meet eligibility rules including having adequate insurance.

The legislation reads, in part: “Parklets are platforms/semi-permanent decks, installed adjacent to public sidewalks, over parking spaces within the public right-of-way; and … are open to the general public because of their location in the public right-of-way, may include tables, chairs, umbrellas, landscaping, food and beverage service, and sun shade.”

Development of a parklets program will “expand the pedestrian experience and enhance the quality thereof beyond the sidewalk,” it reads.

Rules governing eligible locations include:
■Parklets are permitted on city maintained roadways with speed limits of 25 miles per hour or less that abut commercial uses.
■Parklets can be sited along the curb line on streets where on-street parking spaces exist. The parklet can be considered on any location where there are, or would be, spaces for on-street parking including spaces with metered or unmetered parking.
■Parklets are generally permitted on streets with a grade of 5% or less. When installed on streets with running slopes of 3% or greater, parklets will be required to include a wheelchair rest area.
■Parklets are limited to two per city block, first come first served.
“I don’t mind trying the pilot, especially downtown,” Mr. Gort said.