Advertisement
The Newspaper for the Future of Miami
Connect with us:
Front Page » Communities » Cross Bay Express Trolley really wasn’t ready to roll 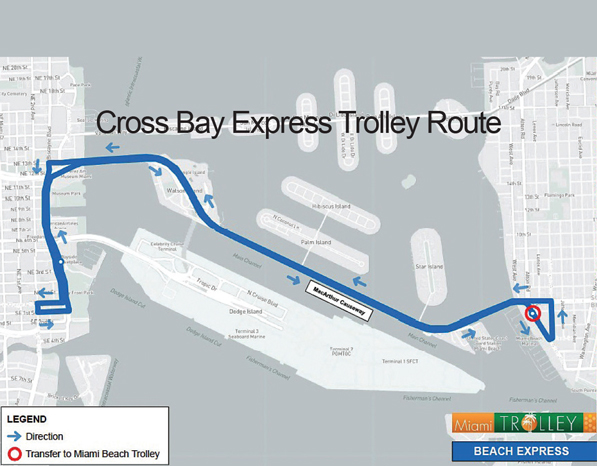 People eager to hop on the new Cross Bay Express Trolley and ride from the City of Miami to Miami Beach will have to wait a little while longer.

The rubber-tire public transit service was planning to launch Sept. 14 but the city says a few details still need to be worked out before the service begins.

Miami Today asked city officials this week about the status of the new trolley. “The Cross Bay Express service has not yet started. We are hoping to have it running by mid-October,” Eugene Ramirez, director of the city’s Office of Communications, said in an e-mail response.

The vehicles are not owned by the city but are being outfitted with wrapping that displays the City of Miami logo or seal and identifies the buses with the brand: Cross Bay Express, according to Mr. Ramirez.

The wrapping of the larger vehicles will not be advertising, he said. The city’s fleet of smaller trolleys, designed like old-fashioned streetcars, does have various amounts of wrapping that includes advertising.

City of Miami leaders have worked for some time to secure a regular public transit connection to Miami Beach via the MacArthur Causeway and Watson Island.

Mr. Ramirez has said the city is committed to offering an inexpensive and convenient express service that is accessible and sustainable. In concluding his email this week he wrote: “A convenient link between Miami and Miami Beach has been much talked about, and we’re proud to make it a reality. There are no additional details at this time.”

In July, Miami commissioners gave initial approval to expand the city’s trolley system by launching a new route to Miami Beach. The Sept. 13 vote authorized the city manager to execute an agreement with METC to operate the trolleys as part of a one-year pilot program, and it set the route and passenger fee.

Each one-way trip is to cost $5. It is the first Miami municipal trolley to charge a fee, and the goal is that this new route be self-supporting. The pilot program is set up so that if the service doesn’t pay for itself, Miami officials can immediately shut it down.

The buses are to run from noon to midnight daily at 30-minute intervals. The resolution required a four-fifths vote, after an advertised public hearing, approving the city manager’s recommendation waiving competitive sealed bids as “not being practicable or advantageous” to the city. The vote was unanimous.

The deal is for one year with an option to renew for two additional one-year periods. Some city commissioners approved the new route only after getting assurances from administrators that the added service won’t cost the city any money.

Emilio González, Miami’s city manager, said it is considered a “for pay” service – covering its costs – and “should that not happen, we would terminate.” Commissioner Wifredo “Willy” Gort said Sept. 13, “I want to make sure, if it’s not making money it would close.” “Yes, but we are very confident it will work,” Mr. González responded.

The city manager spoke confidentially about the anticipated success of the route, and said he’s been in talks with City of Miami Beach officials about offering a similar service to fill in the schedule, enabling the Cross Bay Express to become a 24-hour operation.

A background memo said METC offered the city three double-decker buses that can each carry 66 passengers, which is more than double the capacity of the typical city trolley. At full capacity, each bus can accommodate 3,000 daily boardings.

“Riders will be charged a nominal fare of $5 per passenger, per segment of the route (either from Miami to Miami Beach or from Miami Beach to Miami). This fare will offset the $115 per hour cost for the Route operation services.

In the event, that the fare collected for the month, does not cover the service charges for the month, the City will pay the Contractor the difference,” the memo says. The agreement with the vendor says in part: “The City, acting by and through its City Manager, shall have the option to extend or terminate the Agreement for convenience, that is, for any or no cause.”