Advertisement
The Newspaper for the Future of Miami
Connect with us:
Front Page » Transportation » I-395 signature bridge bringing illuminated park downtown 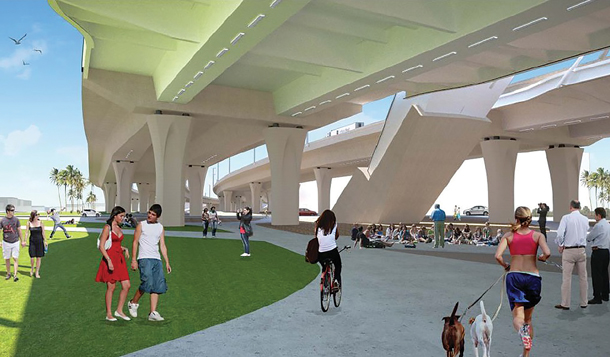 When the I-395 “signature bridge” is finally in place about five years from now, Miami will have not only the landmark span that’s been talked about for years but also a 30-acre illuminated park beneath the new road, said James Wolfe, secretary of the Florida Department of Transportation’s District Six.

Speaking to directors of Miami’s Downtown Development Authority last week, Mr. Wolfe said the new community space will be created because support columns will go from the present 14 feet high to 30 feet high and their number will be reduced by half, owing to the stronger precast concrete that will be used.

The proposed new space would run from Northwest Third Avenue to Biscayne Boulevard and would host a mix of private and public uses, he explained. The transportation department has committed to building out the space and is looking for a partner to operate it. “We will find such a partner,” Mr. Wolfe said. “We have some lead time.”

“Our DET team can be a force for beautification, landscaping, and maintenance there,” said Ken Russell, authority chair and Miami commissioner, referring to the Downtown Enhancement Team, a group of formerly homeless people who perform cleaning and maintenance tasks downtown. Camillus House and the Chapman Partnership are partners and train the workers.“It is a potential workforce that, at a $15 per hour gross rate, is much less expensive workforce that can help us activate that area,” Mr. Russell said.

Though he cautioned that the final design is not complete, Mr. Wolfe and engineers Maria Perdomo and Jackie Sequiera showed the downtown authority a series of renderings. The new road itself is a suspension bridge crowned by six rainbow-shaped, 330-foot arches. The roadbed is supported by 100-foot cables connected to the arches, all of which will be illuminated at night for maximum effect.

The $802 million project will be funded by the transportation department ($616 million) and the Miami-Dade Expressway Authority ($186 million). It will include a double-deck stretch that will accommodate local traffic on the ground and Miami Beach-bound traffic on the upper level, as well as changes to State Road 836 and the addition of one more lane to the northbound entrance to I-95.

“People will fall in love with this design,” Mr. Wolfe said, “and it greatly improves the flow on I-395, as well as the connection of the neighborhoods beneath the bridge.”