Advertisement
The Newspaper for the Future of Miami
Connect with us:
Front Page » Transportation » Trolley info may soon enter Miami-Dade’s transit tracker app 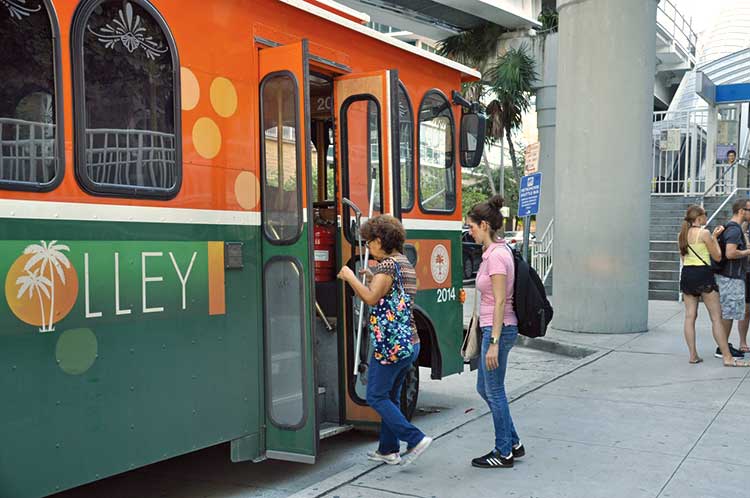 Cities might soon have to feed route and use data for their trolleys and shuttles into Miami-Dade’s transit tracker app: commissioners on Friday backed a plan to better tie the local runs to the countywide network.

The measure by Daniella Levine Cava would require cities with new or altered circulators to supply travel and rider data for circulatory and on-demand services like county-run ridesharing every three months.

“This is some good legislation – something I’ve been talking about for some time in terms of integrating our trolley systems into our regular transit system,” said Commissioner Dennis Moss. “By beginning to pull this information together, it will allow us to get an additional outlook in terms of how the trolley system really benefits the system. We need to view them as that and not as competition, but we need to make sure [they’re] not taking away our riders as well.”

As county transit use has plunged, including a 12% Metrobus drop from last year, local circulators since 2013 have added 10% a year.

Integrating their information into the county transit app, as well as funneling the data to services like Google Maps and Apple Maps, would establish a single transit system to provide better and more accurate options, a memo from County Attorney Abigail Price-Williams said.

Miami-Dade has progressed in this over two years but hasn’t yet had full cooperation from every municipality, said Transportation Director Alice Bravo, who said the county would need new equipment to accurately track the circulators.

“Then we’ll have real data instead of the estimates we receive right now,” she said. “Most of the cities right now don’t have any type of passenger counting equipment since they don’t have fare collection; the circulators are free.”

About 22% of the transit sales tax that voters approved in 2002 to expand transit now funds the circulators, Ms. Bravo said.

“Basically, we’re the ones that allow them to run their routes, so that requires cooperation with us in terms of making sure their routes support our greater network,” she said.

The Miami-Dade Transit Tracker, available on iPhone and Androids, provides Metrobus routes and arrival times for Metrorail, Metrobus and Metromover. Of five possible points, the app gets a 3.4 rating in the Apple Store and 4.3 on Google Play, where it has been downloaded more than 100,000 times.

About 2½ years ago, the county added circulator information to the app, but not every municipality could provide it.

“Some cities have no GPS on their vehicles,” Ms. Bravo said. “It’s a mishmash of information.”

The new rules would help erase a major drawback of increased local circular use: service redundancy, said Rebeca Sosa, who requested an amendment to determine the feasibility of extending circulators into neighboring municipalities that don’t have them.

“Maybe [that’s] something that you can bring to the table as part of this mandate that can help us see what those cities do not have – how we can help so we can establish complete articulation, because we’re missing that part,” she said.

“This…will give us more information about what the cities are doing,” she said. “It’s all about the public’s knowledge and transparency.”