Advertisement
The Newspaper for the Future of Miami
Connect with us:
Front Page » Communities » Navigation apps have waze of annoying neighborhoods 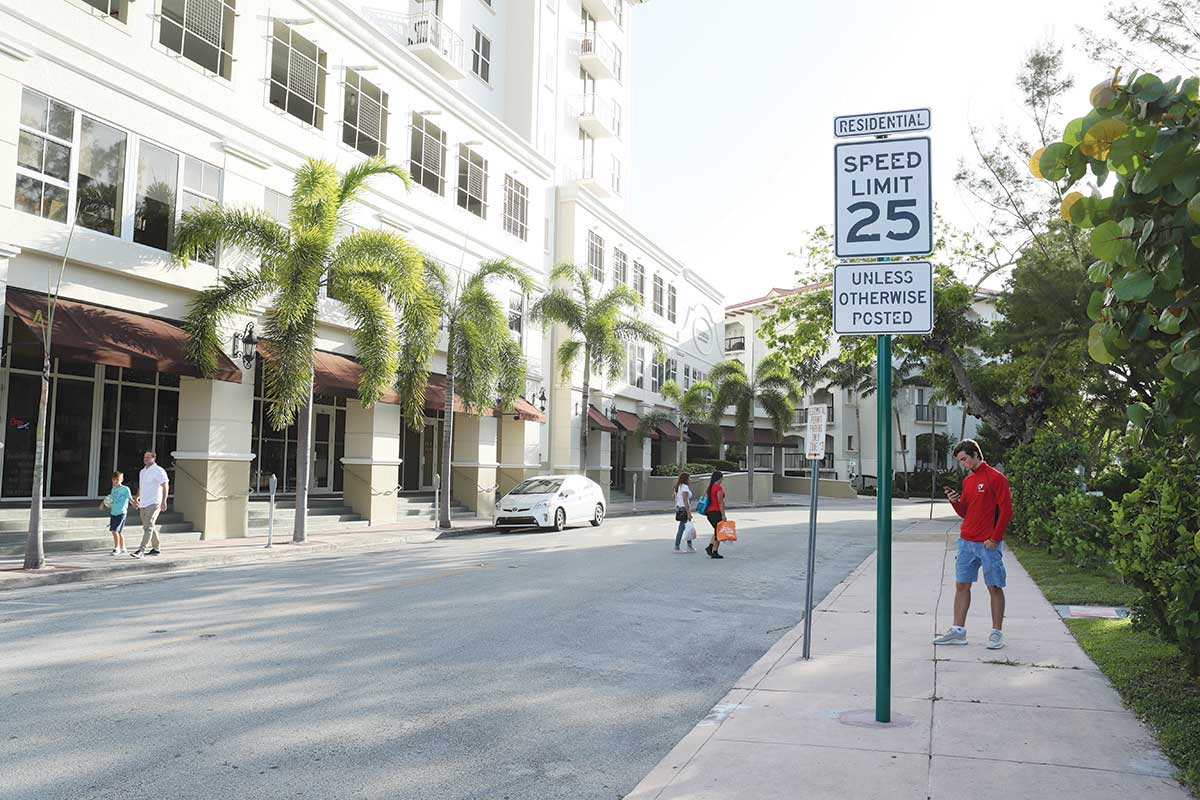 For many drivers braving the country’s increasingly congested roadways, navigation apps like Waze, Google Maps and Apple Maps are a godsend, empowering them to circumvent gridlock through alternate thoroughfares and side streets.
More smartphone owners today use their devices to get around than listen to music, according to a 2016 Pew report, which found 90% use location-based apps that utilize mobile devices’ global positioning systems (GPS) and shared user data to determine efficient routes.
Some, like Waze, which Google bought in 2013 for about $1 billion, even allow users to report accidents, police activity and traffic jams with each other.
But such ubiquitous convenience has come at the expense of an increasingly vocal contingent of residents who complain of neighborhoods swelling with non-residential traffic, as app-directed commuters move off highways and onto byways.
“Waze is a challenge,” Coral Gables Mayor Raúl Valdés-Fauli told Miami Today this month when asked about the app. “We have several streets that are cut-through streets, from 57th Avenue to Douglas Road, and I want to preserve the sanctity of our residential areas.”
Coral Gables this year installed 158 new speed limit signs reducing speeds from 30 to 25 miles per hour – a nearly $150,000 overhaul – to replace 127 existing signs on residential streets.
Speeding commuters had more frequently been using Gables streets to bypass congestion, according to Jessica Keller, the city’s assistant transportation, public works and sustainability director, who told Miami Today last month the increase had caused more accidents.
A higher number of speeding tickets handed out by Gables police had gone to non-residents, Gables Police Chief Ed Hudak had confirmed.
“The city actually had to [enact a lower speed limit] in residential neighborhoods because of the amount of pass-through traffic Waze was taking off the main thoroughfares,” said Mark Trowbridge, president of the Coral Gables Chamber of Commerce. “On any given day, more than 100,000 people come through Coral Gables – it doesn’t matter whether you’re going down Coral Way and Miracle Mile or US 1.”
Two years ago, Coral Gables received county approval to lower speed limits, though according to Miami-Dade Traffic Services Assistant Director Darlene Fernandez, navigation apps like Waze were not deciding factors in the decision.
“The conversation about lowering speed limits precedes the arrival of Waze,” she wrote Tuesday. “Speed reduction has always been looked at as a way to reduce severe collisions and improve safety. Further, the Florida Department of Transportation’s Complete Streets Initiative calls for the lowering of speed limits from 45 miles per hour to as low as 25 miles per hour on state roads.”
Speed reductions are determined through an engineering analysis known as the “85th percentile,” in which a speed at or below what 85% of drivers use while driving under good weather and visibility conditions may be considered the maximum safe speed for a given location.
The theory is based on the assumption that most drivers are reasonable and cautious, want to avoid crashes and intend to reach their destinations in the shortest possible time.
What isn’t taken into consideration, Miami-Dade Transportation Director Alice Bravo said, is overall traffic influx and congestion.
“There [have] always been situations of vehicles using the entire roadway grid, and that’s what the roadway grid is there for,” she said. “When there are situations with regard to specific areas that need some type of calming, we work on those on a one-by-one basis, but our roadway network is there for vehicles to use.”
Miami-Dade County, along with hundreds of domestic and international counties and cities, has partnered with Waze through its Connected Citizens Program. Through the program, cities provide data about closed roads, additional signs or road rules and Waze, in exchange, gives participating municipalities live anonymous traffic information.
The county became the first in Florida to join the program in June 2016. A year later, the Miami-Dade Water and Sewer Department won two awards from the National Association of Counties, including one in the category of Information Technology for partnering with Waze to mine information to update construction data for its Internal Services Department.
“We are thrilled to partner with Waze in order to provide our 2.7 million residents with the most accurate, up-to-date information for their daily commute,” Miami Mayor Carlos Giménez said in a prepared statement at the onset of the partnership.

For some municipalities, the bloom from that relationship has all but worn off.
Palmetto Bay Mayor Eugene Flinn last month told WSVN his city was spending more money on police enforcement and infrastructure to address and slow traffic he attributed to apps like Waze, whose police-reporting features he found troublesome.
“The only reason to identify where the location of the officers are is to enable people to drive in excess or contrary to the law,” he said.
Some cities are working to prevent traffic apps from sending drivers into certain residential areas.
In January, local legislators in Leonia, NJ, barred non-residents from using 60 side streets, with threats of $200 fines for violators.
A nearby resident responded by suing the city, citing an infringement on her “access to public roads and violating the public’s right to freedom of travel.”
In February, Weehawken, NJ, applied its own similar restrictions, banning all but residents of the township, Hoboken and Union City from driving on its side streets.
That same month, Los Angeles Councilman David Ryu wrote a letter to the city attorney asking that legal action be brought against Waze for threats to public safety.
Many of the shortcuts the app suggests, Mr. Ryu argued, result in more traffic and unsafe road behavior.
“Waze has upended our city’s traffic plans, residential neighborhoods, and public safety for far too long,” he wrote on April 17. “If we do nothing, Waze will lead us on a race to the bottom – where traffic plans are ignored and every street is gridlocked.”
Gridlock and dangerous road conditions are the result of too few streets, bike paths and sidewalks, according to Ms. Fernandez.
“The Waze app, just like any other navigation application (Google Maps, Apple Maps and others), uses public roadways to provide direction and traffic information,” she wrote. “We must ensure the safe use of all public roadways, rather than restricted access. The lack of infrastructure is what impedes the safe use of roadways. Cul-de-sacs, neighborhoods and streets without sidewalk and/or bicycle lanes put pedestrians/cyclists at risk.”