Advertisement
The Newspaper for the Future of Miami
Connect with us:
Front Page » Profile » Raúl Valdés-Fauli: Mayor takes on challenges of safety, traffic, education 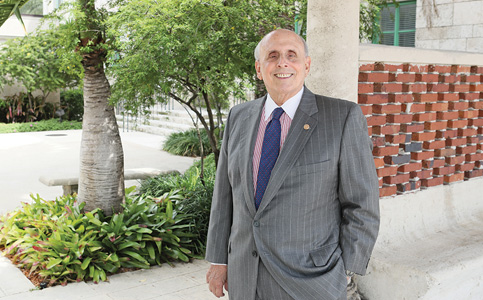 As mayor of Coral Gables, Raúl Valdés-Fauli is charged with guiding the city’s improvements and growth, including downtown development and adding adjoining regions into the city limits.

But  Mr. Valdés-Fauli – who previously served as Coral Gables mayor from 1993 to 2001, vice mayor from 1987 to 1988 and city commissioner from 1985 to 1989 – says such large projects do not distract residents from focusing on the smaller responsibilities of local government.

“The city works very well with people that tend to look at minor details,” he said. “People worry about paving the streets and the tree that fell in front of their house. After [Hurricane] Irma, for example, we picked up the debris in basically two weeks. We had 370,000 cubic yards of debris to pick up, and we did it. That’s what we have to diligently take care of.”

A former banking lawyer, Mr. Valdes-Fauli says the consolidation of banks and disappearance of many foreign banks convinced him to discontinue his specialized work in the field.

Now, in addition to his responsibilities as mayor, he practices at his own firm, Raúl Valdés-Fauli Law Office, which he describes as “a family office.”

A winner of several noteworthy awards, including the University of Miami Law School’s “Lawyer of the Americas,” South Florida Legal Guide’s “Top Lawyer” and France’s “Office of the Order of National Merit,” Mr. Valdés-Fauli boasts a lengthy resume of local involvement.

He founded the Spain-US Chamber of Commerce in Miami, the Venezuelan-American Association of the United States and co-founded the US-Argentina Council.

Most recently, Mr. Valdés-Fauli was a member of the Decennial Coral Gables Charter Review Committee in 2015, which served as a precursor for his mayoral bid two years later.

“I love Coral Gables,” he said.“I live here, my children grew up here and I’m committed to the city, its preservation and future.”

Mr. Valdés-Fauli sat down with Miami Today reporter Jesse Scheckner in his City Hall office in Coral Gables. The video interview, recorded by Jahmoukie Dayle, can be found Friday at http://bit.ly/2uNHy0Q.