Advertisement
The Newspaper for the Future of Miami
Connect with us:
Front Page » Real Estate » Site work on Grand Station in the heart of downtown Miami takes root with tree mitigation 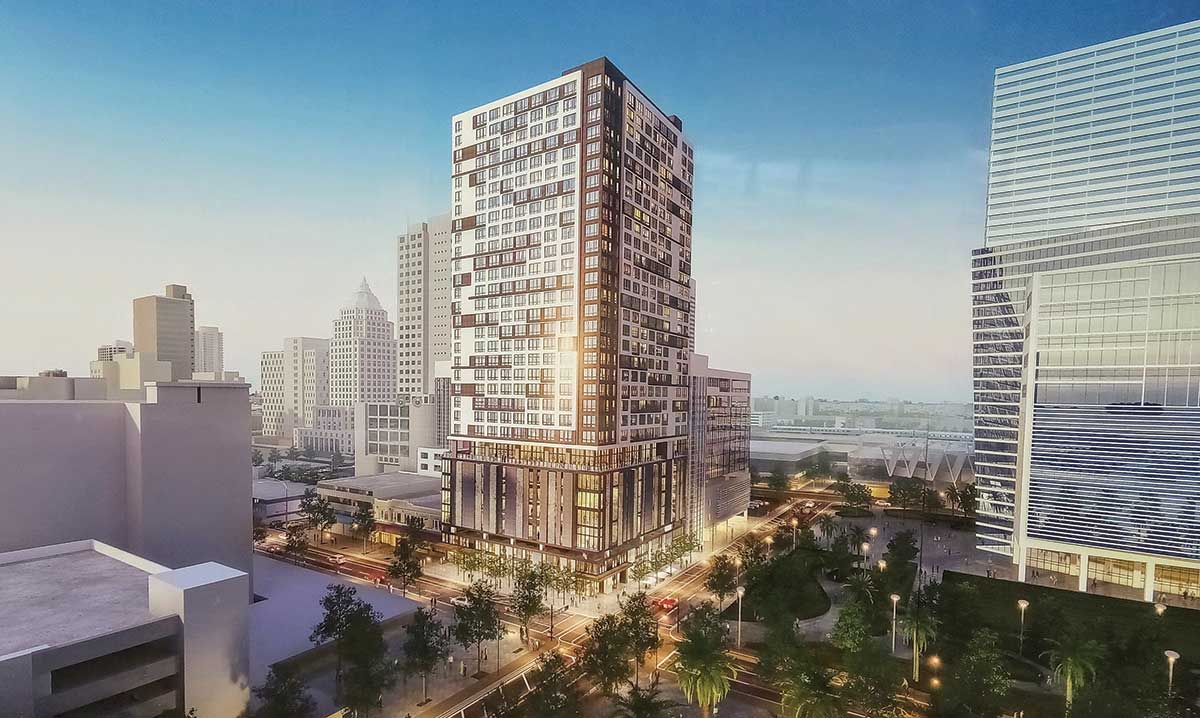 Site work has begun on a high-profile parcel in the heart of downtown Miami that will bring one of the first new residential towers to an area anchored by many institutional buildings.
“They are moving fast,” said Miami Parking Authority CEO Art Noriega regarding developer Grand Station Partners LLC.
Construction fencing has been erected around the vacant corner lot next door to the parking agency’s flagship garage and headquarters, Courthouse Center Garage at 40 NW Third St.
The authority calls the next door lot “Parcel B” – not to be confused with the county’s Parcel B on the bayfront. The undeveloped site at 240 N Miami Ave. has grass, sidewalks and small to medium sized trees.
A public-private partnership with Grand Station Partners LLC will see construction of multi-family apartments and retail development to the property, along with added parking levels, just a block or so from the MiamiCentral transportation hub with passenger rail service Brightline.
At a meeting July 30, Mr. Noriega updated the Off-Street Parking Board on the progress of the Grand Station project.
“They are knee deep in tree mitigation right now,” he said.
Mr. Noriega mentioned the installation of the security fencing, and how it is adorned with the latest color renderings of the Grand Station project.
The images are creating a positive stir, he reported.
“People really like the architecture. There’s nothing like that in this part of town, which is so institutional,” he said.
Opened in 2010, Courthouse Center Garage is a public parking facility with upper and lower office space and some ground-floor retail. The largest office user is the parking agency itself, in about 10,000 square feet on the top floor.
Grand Station is rising next door and will include an 8-story pedestal of new parking with about 376 spaces, tied into the existing 11-story garage. The main portion of the project is a 31-story residential tower with about 300 apartments.
The new building will also have about 5,000 square feet of ground floor retail uses.
At the parking board’s July 11 meeting, Mr. Noriega spoke of the Grand Station project in light of the other major construction in the downtown area, including the realignment of a street west of the Courthouse Center Garage.
“You know, we have obviously a pending significant project, which is the street realignment, the avenue realignment to our west. [They’re] going to realign that whole street. That’s going to have an impact as well, obviously… accessibility to the project and to our garage. And so, you know, [we’re] kind of working through that. It’s going to be uncomfortable the next probably 18 months in the immediate area, but we will sort of work through it,” said Mr. Noriega.
The parking agency staff and city officials have been working on a plan to help ease traffic congestion once the Grand Station project begins in earnest.
In March, Mr. Noriega said the parking authority was working on measures to ease anticipated traffic congestion around its flagship garage.