Advertisement
The Newspaper for the Future of Miami
Connect with us:
Front Page » Government » For the first time in seven years, City of Miami doesn’t lower overall millage rate 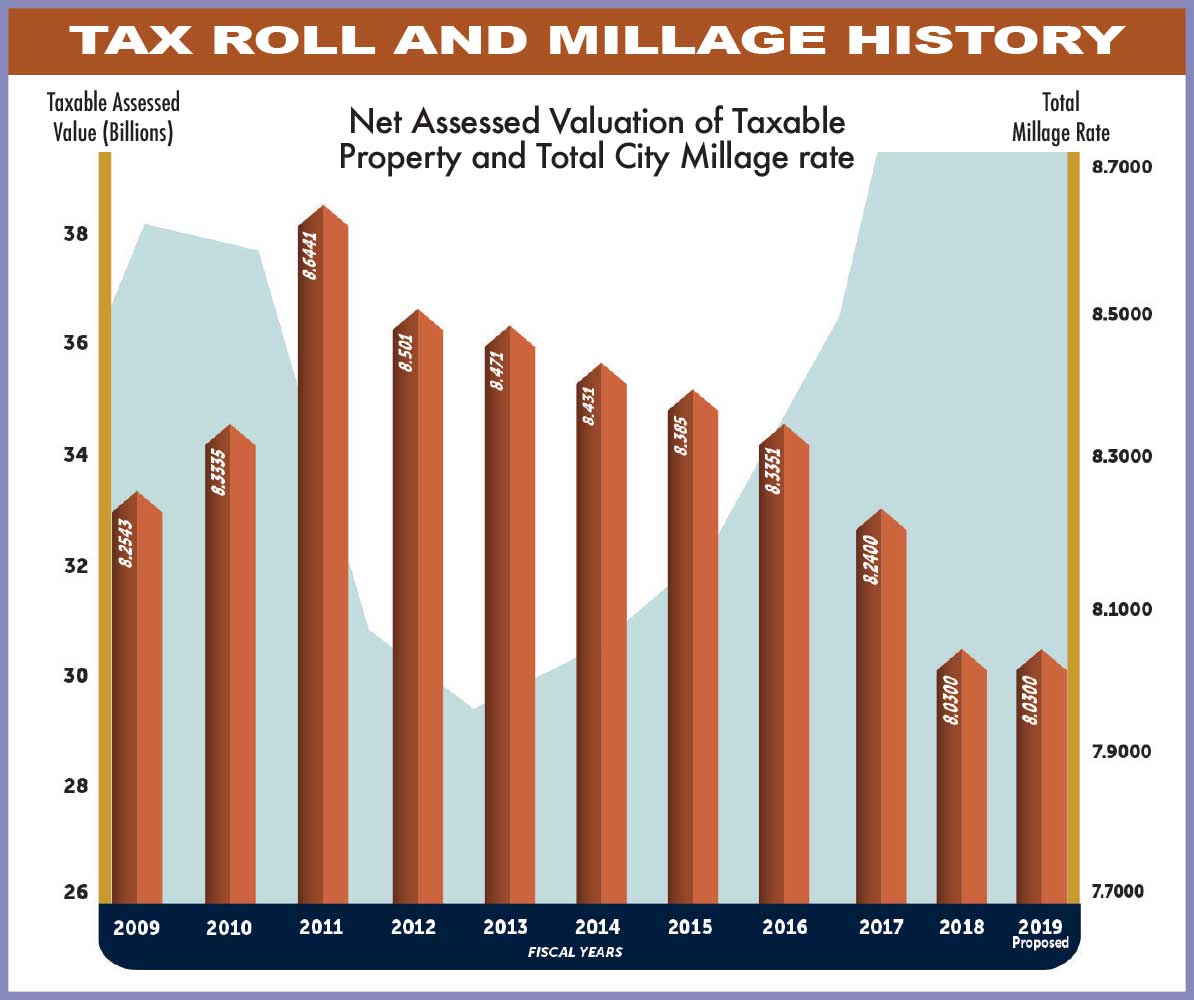 The proposed overall millage rate in the City of Miami, used to calculate property tax bills, will remain unchanged for the fiscal year that begins Oct. 1.
The city commission on July 26 set the proposed overall millage rate for fiscal year 2018-19 at 8.0300 mills.
It includes general operating millage of 7.5865, and debt service of 0.4435, reflecting slight adjustments from the current fiscal year.
The city’s proposed budget for the new year was released in July by Mayor Francis Suarez and City Manager Emilio T. González.
Mr. González referred to the millage rate adjustment in his cover letter with the proposed budget.
“There is no increase in the total property tax rate. We are, however, proposing increasing the operating property tax millage by 0.15 mills and reducing the debt millage rate by the same amount. This will require a supermajority of four votes of the City Commission according to State law, instead of the normal three-vote simple majority,” wrote Mr. González.
The vote was unanimous.
The current overall millage rate for the city is split this way: general operating millage of 7.4365, and debt service of 0.5935.
Final approval of the millage rate for 2018-19 is expected in late September and will mark the first time in seven years the city hasn’t lowered the overall millage rate. For comparison, the city’s overall millage rate in fiscal year 2011 was 8.6441 mills.
The General Fund includes revenues from a variety of sources, including fees, fines, and state and local taxes. Property tax revenue comprises 47.9% of total General Fund revenues and represents the largest source of funding for general operations.
In the proposed 2018-19 General Fund Budget of $750,686,000, property tax revenue amounts to about $356.7 million.
Christopher Rose, Office of Management and Budget director, reported that every tenth mill will generate approximately $4.6 million for the City of Miami General Fund in the next fiscal year.
Florida law governs the setting of millage rates by municipalities, adoption of budget, and the timeframes required of each.
It requires that the City of Miami advise the property appraiser of its proposed millage within 35 days of the July 1 certification of value so that the information can be included in the notice of proposed property taxes mailed to property owners in August.
Even with the city’s overall millage rate remaining unchanged, many property owners can expect to pay a bit more in overall property taxes due to an increase in assessed value at the county level. According to the Miami-Dade County property appraiser, this year the city had an overall property value increase of 4.8%, before new construction.
The same state statute governs the timeframes for the first and second budget hearings.
The city commission’s vote July 26 set the first budget hearing for Sept. 13 and the second for Sept. 27. The hearings are set for 5:05 p.m. in the City Commission Chambers at City Hall, 3500 Pan American Drive.
Effectively, the tentative millage adopted represents the upper limit for the millage rates to be considered in September. The commission may lower the general operating millage rate at either of the two budget hearings, but effectively cannot raise it above what is adopted in July. State law allows for this possibility, but it cannot be practically achieved within the timeframes provided in state law. According to the property appraiser’s office, this re-noticing of millage rates has not been accomplished even once in the history of the state.
Last month, Mayor Suarez and the city manager presented a proposed 2018-19 General Fund Budget of $750,686,000, which is $23.858 million more than the current adopted General Fund Budget of $726,828,000.
“This is the part of the budget that funds the largest number of City functions, has the least number of restrictions on how the funds can be spent, and therefore has the most pressure upon it,” Mr. González wrote in his cover letter.
The city’s proposed Operating Budget for the coming fiscal year amounts to $1.086 billion, and includes a $14 million reserve for labor negotiations and $5 million for beautification projects.
The proposed operating and capital budgets are available at the city’s website at www.miamigov.com/budget.