Advertisement
The Newspaper for the Future of Miami
Connect with us:
Front Page » Transportation » Cross Bay Express trolley may charge $5, start in September 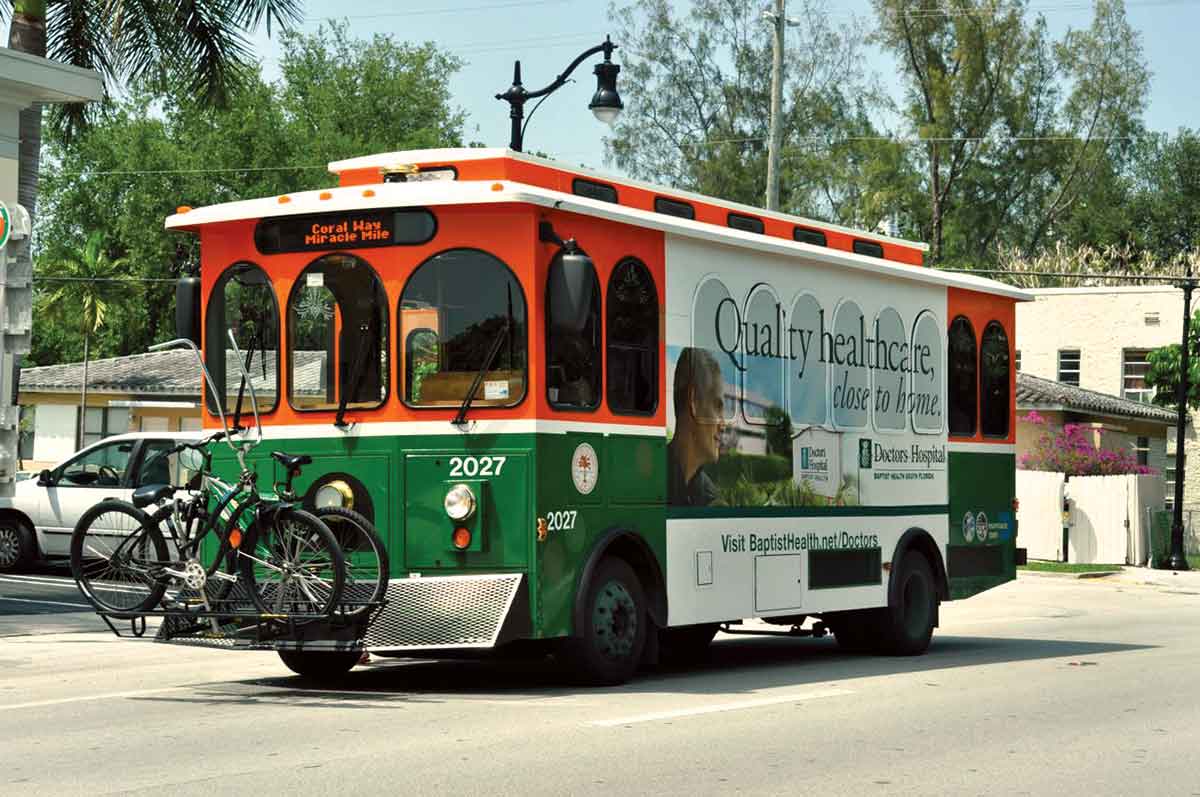 The City of Miami has agreed to expand its trolley system by launching a Cross Bay Express to ferry passengers from Downtown Miami to Miami Beach and back.
It will be the first and only City of Miami trolley route to charge a fee for the ride. The idea – the hope – is that the service pays for itself.
But a couple of city commissioners questioned who picks up the tab if the new route loses money.
On July 26, commissioners approved a resolution authorizing the city manager to negotiate an amendment to a current agreement between Miami-Dade County and the City of Miami, adding the Cross Bay Express trolley route to the city’s trolley system to provide service from Bayside Marketplace to Miami Beach and back.
The new route would travel along Biscayne Boulevard, east on the MacArthur Causeway, south on Alton Road to South Pointe Drive, Washington Avenue to Fifth Street, and west on MacArthur Causeway for about total 9.67 miles seven days a week, “charging a fare not yet determined,” the resolution says.
City officials said the new route will operate with double-decker buses. The pilot program is for one year.
Commissioner Ken Russell successfully added a stop at the Frost Museum/PAMM Metromover station, adjacent to the MacArthur Causeway.
The resolution notes the pilot program is pending modifications in operating hours. It further authorizes the city manager to make future changes to the route and negotiate and execute all other documents, including any amendments and modifications to the agreement as may be deemed necessary “… subject to the availability of funds and budgetary approval.”
“Who is paying for this?” asked Commissioner Wifredo “Willy” Gort. He was joined in the inquiry by Commissioner Joe Carollo.
Alan Dodd, director of the Department of Resilience and Public Works, said the plan is to contract with a vendor for the pilot program, to see how popular it is. No vehicles will be purchased, he said.
Commissioners pushed him for answers to who would be responsible for financial losses.
“Our intent is that the private company absorb [loses],” Mr. Dodd told commissioners.
“He doesn’t understand me. If there is a shortfall, who is legally responsible?” asked Mr. Carollo.
Mr. Dodd’s boss, Assistant City Manager Nzeribe Ihekwaba, responded: “It is a valid point … if there is a shortfall the city would be responsible.”
But Mr. Ihekwaba went on to explain the plans for the pilot program include establishing a fare to help cover costs.
Negotiations are not final, he said, but the program generally would have the contractor provide vehicles and drivers and city provide diesel fuel.
At the meeting, Mr. Russell said the administration was considering $5 for the fare. In an email this week, responding to Miami Today, Mr. Russell said the city manager was estimating $5 per ride, but it will be set later based on projected usage and costs.
Also in an email, Eugene Ramirez, director of the city’s Office of Communications, wrote: “Right now the details, including fare, are still being worked out. The City is committed to offering an inexpensive and convenient express service that is accessible and sustainable.”
The new trolley route was sponsored by Mayor Francis Suarez and Commissioner Russell.
A background memo notes the City of Miami now operates a multitude of free trolleys in the Allapattah, Biscayne, Brickell, Coconut Grove, Coral Way, Downtown, Health District, Little Havana, Overtown, Wynwood and Little Haiti areas.
“This route provides new transportation service for residents, tourists, and commuters alike by providing additional linkage between the City of Miami and the City of Miami Beach,” it says.
The route will link to stops of the Miami Beach trolley, existing City of Miami Biscayne and Coral Way Trolley routes, Miami-Dade County Metromover and Metrobus routes including 3, 93, C (103), M (113), S (119) and 120 Beach Max.
The Cross Bay Express route is expected to begin operating around Labor Day as a pilot project, with possible expansion of stops and routes if it succeeds, city officials said.