Advertisement
The Newspaper for the Future of Miami
Connect with us:
Front Page » Communities » The city’s Urban Development Review Board recommends Little Havana apartments/retail plan 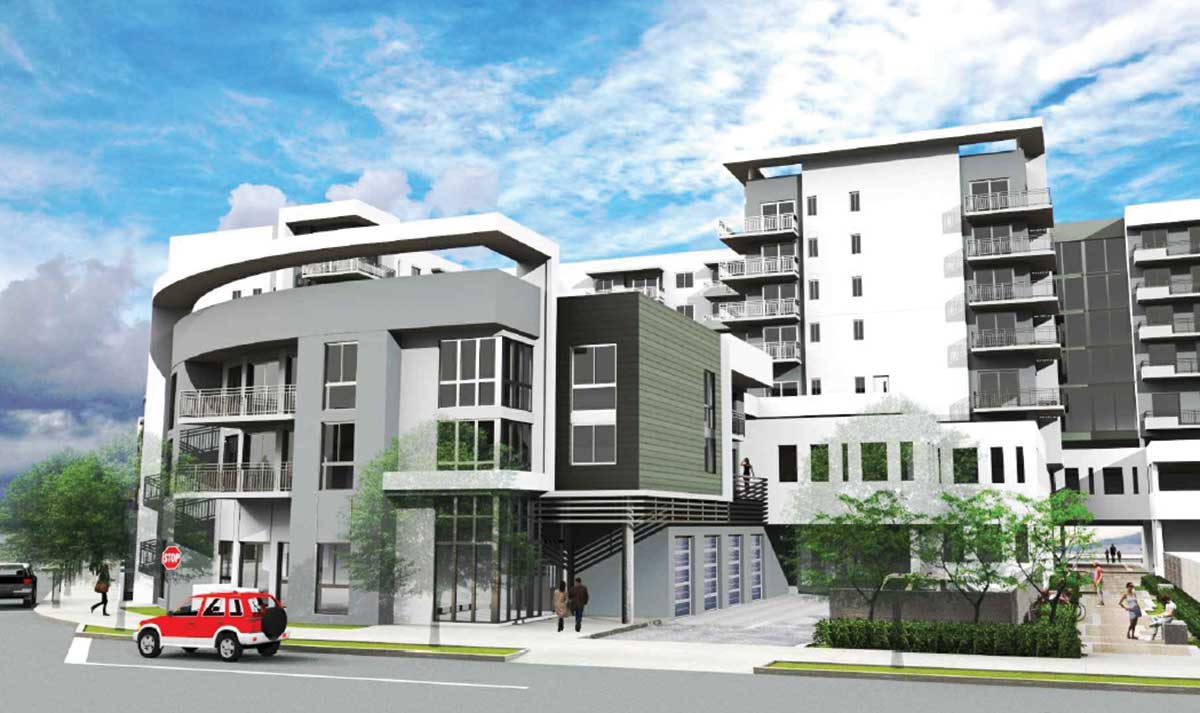 A developer plans to transform a corner block in Little Havana into a mixed-use apartment building lined by retail shops.
Altman Development Corp. is proposing to construct a project called Altis Little Havana at 2100 SW Eighth St. Plans call for about 224 residences, 9,500 square feet of commercial-retail, and parking for about 351 vehicles.
The city’s Urban Development Review Board has recommended approval, with a couple of conditions.
The 1.96 acres has three frontages, said Javier F. Avino, an attorney representing the developer.
The commercial space is to be ground floor retail, and the project will include a 20-foot-wide cross-block pedestrian passageway. He said the passageway offers nice connectivity for the neighborhood.
The entrance drive will be off of Southwest Eighth Street, a one-way street.
The architectural firm is Anillo, Toledo, Lopez, and the architect presenting was Carlos Jimenez.
He went over details of the site plan and a few renderings. The main lobby will be in the northwest corner of the structure. Much of the parking will be interior locations with liners all around.
Review board member Ignacio Permuy complimented the design of the inward parking. “A great job,” he said. But he was less complimentary about the mass of the structure.
“With regard to the massing, it seems it’s a rectangle … I’d hope you’d break it up … this is a very long linear mass. Perhaps a little more play with the building heights,” Mr. Permuy said.
In a letter to the city, Mr. Avino wrote: “The Property is located within Miami’s Little Havana neighborhood, surrounded by a mix of residential and commercial uses along Calle Ocho. The northern portion of the property, consisting of approximately 59,165 square feet, has a zoning designation of T6-8-0. The remaining 26,502 square feet of the Property to the south has a zoning designation of T4-L.”
The different zoning classifications are reflected in the height: the project will rise eight stories on the northern section and three stories on the southern end.
“The modern design incorporates white and silver smooth stucco with green accents and aluminum elements, as further depicted in the attached plans. The linear box-like forms of the structure create movement along SW 8th Street, broken up by the transparent glazing wall façade located above the cross-block pedestrian passage,” wrote Mr. Avino.
The letter references several requested waivers, with a response or explanation from Mr. Avino.
The applicant has applied for a waiver allowing reduction in driveway width from 23 to 22 feet.
“This Waiver will allow for proper vehicle circulation within the garage while providing the necessary parking stall length and turning radius at all corners. Driveway widths of 22 feet will also permit more open space for the pedestrian passage in furtherance of the intent of Miami 21 while maintaining compliance with required parking design standards,” Mr. Avino wrote.
The applicant is requesting a waiver to allow up to a 10% reduction in required parking, from 383 to 351 spaces.
Mr. Avino noted the project is along “walkable and busy” Calle Ocho, and “this waiver will allow a modest reduction in the required parking, permitting the buildable area of the property to accommodate retail, residential space, and proper internal circulation rather than excess parking area, in furtherance of the guiding principles of Miami 21.”
Other waivers requested include allowing the substitution of a commercial loading berth of 12 by 35 feet with two residential loading berths of 10 by 20 feet; allowing vehicular, loading, and service access from a principal frontage; and allowing a 3% increase in maximum lot coverage on the portion of the property zoned T6, from 80% to 83%.
Mr. Avino wrote: “The proposed Project will provide needed residential uses to this area and will be in keeping with the context and scale of the neighborhood. The requested Waivers allow the Project to remain consistent with the guiding principles of Miami 21, permitting a mix of uses, a pedestrian cross-block passage, and open space within an irregularly shaped Property with split zoning.”
Board member Fidel Perez said a few parts of the plan could use improvement, including the public passageway. He said the crosswalk goes nowhere.
A developer representative said the walkway would connect a residential area to the south with planned retail stores along Southwest Eighth Street.
Regarding three homes to the south, they look into a blank wall of the proposed Atlis Little Havana, said Mr. Perez, who suggested a change there.
Mr. Perez also said the swimming pool doesn’t work where it is planned.
Asked by the board, Mr. Avino confirmed the residential units will be rentals. He said no rates have yet been set, however, it is expected the building would serve a workforce population.
Board member Gerald Marston was also a bit critical of the massing, suggesting variations to break up the long façade.
Mr. Marston moved to recommend the approval, with these conditions: consider further development of retail on Eighth Street and in the passageway; enhance landscaping on the south elevation; and revisit the location of the pool.