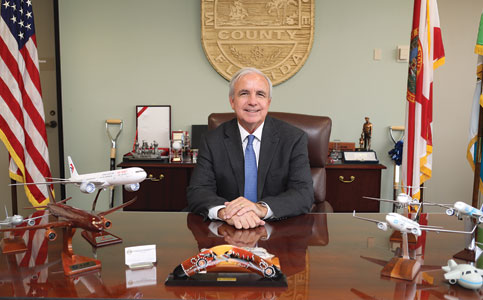 Shortly after Carlos A. Giménez was elected Miami-Dade County mayor in June 2011, the former county commissioner and Miami city manager told Miami Today that transitioning to his new role was easier than expected.

Now halfway through his second and final four-year mayoral term, Mr. Giménez says that while his prior experience informed his administrative work early on, his confidence as a public figure serving in the county’s highest office has since increased in kind.

“This is a strong mayor position; I’m actually the manager and the political figure at the same time,” he said. “The most difficult aspect was transitioning to the political side. I’d learned that as a commissioner, [but being the] county’s political leader was something I had to grow into.”

But Mr. Gimenez, who joined the City of Miami Fire Department in 1975 and became fire chief in 1991, is seldom deterred by difficulty, complexity and criticism.

The benefits of the job, he says – working with great people on interesting projects affecting the county’s future – are always worth it.

“I like challenges,” he said. “As mayor, I have influence over so many aspects of what happens here. Getting things accomplished and doing it the right way, [being] a good steward of the people’s money – that’s what makes the job fun.”

Mr. Giménez sat down with Miami Today reporter Jesse Scheckner in his downtown Miami office July 20. The interview was recorded by Jahmoukie Dayle and can be found Friday at http://bit.ly/2uNHy0Q.