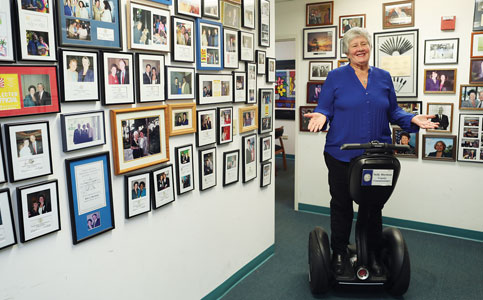 For Miami-Dade Commissioner Sally Heyman, public service has been a lifelong pursuit ranging from youth volunteerism and public school teaching to work with juvenile services, two police departments and more than 31 years in local and state government.

“No day is the same,” she said. “It’s constantly changing and always filled with people, which I like. It’s definitely not a 9-to-5, and my professional positions – and there’s a couple of them – have taken a backseat.”

A member of the Florida Bar who holds state and national certifications in crime prevention, Ms. Heyman began her political career as a North Miami Beach councilwoman, where she served for seven years and worked for the Miami and Miami Beach city police departments.

She was elected to the Florida House of Representatives in 1994 and served four consecutive two-year terms. In 2002, she captured her county commission seat.

“I have always voted what my conscience is,” she said. “I’ll continue to put policy for the county and the people I represent first, whether it’s business, residents, tourists or anybody else.”

Ms. Heyman sat down with Miami Today reporter Jesse Scheckner in her North Miami Beach district office. The interview was recorded by Jahmoukie Dayle and can be found Friday at http://bit.ly/2uNHy0Q.