Advertisement
The Newspaper for the Future of Miami
Connect with us:
Front Page » Transportation » 28 of 136 rail cars, 42 new buses roll slowly into county’s overaged fleets 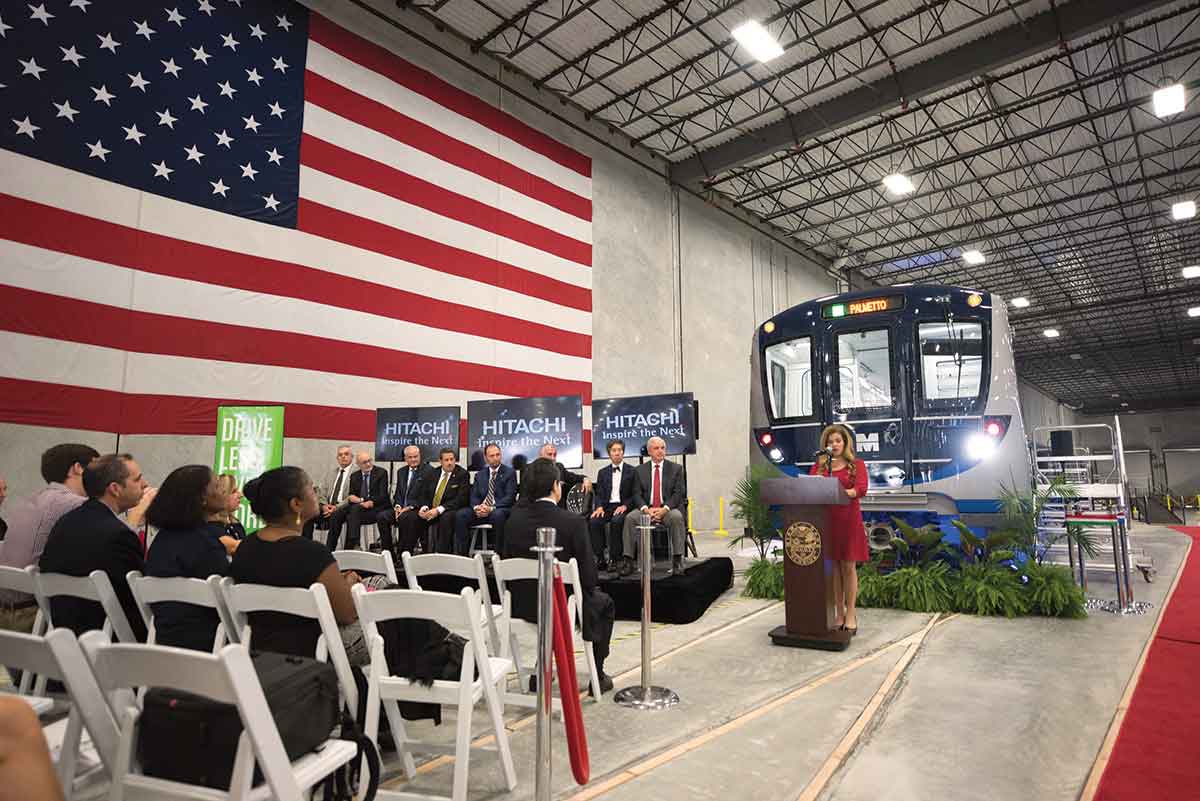 As Miami-Dade County adds to its transit system with a new and improved fleet of vehicles, there have been growing pains, according to a July 12 transportation department status report accepted by county commissioners Tuesday.
As of May, the county received 42 compressed natural gas Metrobus vehicles and 28 new heavy Metrorail cars.
The first new bus arrived in January but it wasn’t added to service until March, along with 10 of 26 additional buses received that month. In April, one more bus arrived while the 16 remaining buses were added to service. Fourteen buses came and were added in May, leaving one bus currently out of service.
Despite the additions, Metrobus service fell short of morning peak requirements every month, as between three and 38 fewer vehicles than was necessary were available for service from of an average 759-bus fleet. On average, 184 buses were pulled from service per month due to mechanical issues. About 31 buses per month remained in operation with non-safety related malfunctioning issues, the report shows.
Metrorail’s incoming 136-vehicle fleet, ordered to replace its more than 30-year-old vehicles, continues to arrive sporadically. Between February and May, the county accepted 28 new rail cars from Hitachi Rail Italy, a subsidiary of Finmeccanica formerly named AnsaldoBreda. Adding the cars in pairs, the transportation department out into service at least two cars per month. As of May 18, seven pairs have been added this year.
That replacement rate has failed to keep up with higher Metrorail frequency demands. At the end of March, the county’s transportation department changed Metrorail schedules during peak transit hours from 7½ to five-minute intervals between Earlington Heights and Dadeland South stations – an 18% daily service hike, from 280 to 330 daily trips.
Across all routes, Metrorail fleet demands rose from about 57 to 76 cars during peak morning hours as a result of the frequency increase, and the number of available vehicles for the system fell short of what was required.
And as with Metrobus, maintenance issues were largely to blame, Transportation and Public Works Director Alice Bravo told Miami Today this month.
“We’re still running older trains, so we might have some type of service failures and that causes missed trips when you have to take a train out of service,” she said. “There’s all kinds of testing and thousands of cycles and miles we operate before we put [new trains] into service. But once they’re in service, glitches happen.”
According to the July 12 report, from 41 to 55 cars were pulled from service this year through May 18. During that time, about 11 cars per month continued to operate with non-safety related malfunctioning issues.
As of early July, 28 Hitachi cars had been delivered, according to transportation spokesperson Karla Damian, who stated the system had made 83.4% of its scheduled trips during peak hours between Dadeland and Earlington Heights stations, up from the 83.3% average maintained under the previous schedule.
Each new rail car costs about $3 million, with the first to arrive in 2015 and the last expected by early 2020.