Advertisement
The Newspaper for the Future of Miami
Connect with us:
Front Page » Profile » Sebastian Spreng: ‘Cultural ambassador’ artist shifts his medium to the iPad 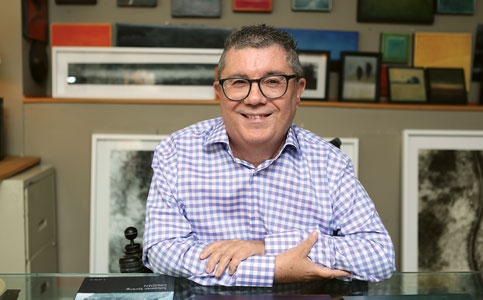 For Sebastian Spreng, 2018 is a wealth of anniversaries, marking the Argentine-American’s 45th year as a professional visual artist, his 35th as a Miami resident and 30th as a music journalist.

Mr. Spreng, named “2018 Cultural Ambassador” by the Miami Chamber Music Society and the 2017 John S. and James L. Knight Foundation “Knight Champion of the Arts,” is exhibiting “DRESDEN,” 60 of his newest works, at the Lowe Museum of Art at the University of Miami through Sept. 23.

The show also features an early painting, “Ruins,” which he exhibited in his first show in 1973 at the Fundación Lowe in Buenos Aires.

Though the painting’s style is notably different from the rest of the pieces in the show, which were done using an iPad, its subject – humankind’s ability to destroy – is reflected in his newer work almost half a century later.

“This show is like a full circle, and there are some comic coincidences, like [going from] that Lowe [to] this Lowe,” he said. “They say artists do the same work over and over again. It’s like going inside of yourself, and you have this image that is constantly changing but in the end is the same. I try to extract the most genuine image from inside myself. It’s an evolution.”

Three years ago, Mr. Spreng, who lives with spinal muscular atrophy, transitioned from painting to digital composition as traditional approaches became too physically painful. He saw it as an opportunity to grow and has since exhibited his iPad artwork in four shows, including “Tones of Miami,” showing in the Knight Concert Hall at the Adrienne Arsht Center for the Performing Arts until the end of the 2017-18 season.

The technology also earned Mr. Spreng, a prolific classical music reviewer, some of his favorite reviews. Visitors of his “DRESDEN” exhibit can view his art through iPads that use augmented reality to make his work come alive.

One Response to Sebastian Spreng: ‘Cultural ambassador’ artist shifts his medium to the iPad