Advertisement
The Newspaper for the Future of Miami
Connect with us:
Front Page » Transportation » Pressure builds for rail service as only choice for the South Dade Transitway 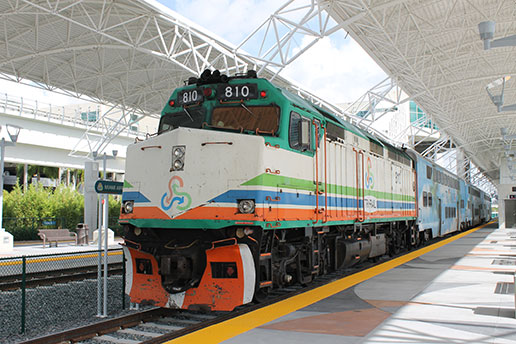 Miami-Dade commissioners haven’t yet decided what upgrades the county will make to the South Dade Transitway, but according to Commissioner Dennis Moss, anything but rail would be a disservice to residents.
At the commission’s July 12 Chairman’s Policy Council meeting, Mr. Moss argued for his resolution directing the mayor’s office to find funding to alter a current study by Aecom Technical Services Inc. to include commuter rail, like Tri-Rail.
After more than an hour of heated discussion, commissioners unanimously forwarded the item without recommendation for a full commission vote July 24.
“That’s what we promised to the people,” Mr. Moss said, adding he’d also mentioned expanding the study to ground-level Metrorail at a July 9 Transportation Planning Organization (TPO) meeting.
On Tuesday, Commissioner Daniella Levine Cava issued a statement in support of such a measure.
“The towns and cities along the route, as well as the county through the unincorporated areas, have already prepared for Metrorail by changing their codes to encourage pedestrian friendly town centers around major stations and have worked to integrate local transit to connect to the Transitway,” she wrote.
Installing Metrorail along the South Dade Corridor was once estimated to cost about $700 million. That amount has since ballooned to $1.3 billion, TPO Executive Director Aileen Bouclé confirmed.
That price tag has led many, including Mayor Carlos Giménez, to consider bus rapid transit (BRT) as the only realistic option.
But Mr. Moss isn’t having it.
“We already got buses,” he said. “Since cost seems to be behind the move to expand with BRT, I’m asking that we look at some alternatives in making our decision about the locally preferred alternative.”
Transportation and Public Works Director Alice Bravo said that after a year of meetings, workshops and studies, disregarding her department’s recommendations would cost the county further time and resources.
Residents would have little benefit from having a rail service, she said, and because of standard train operations, the number of stops along the corridor would drop from 14 to about eight.
“As a result, we know ridership would be lower,” she said, adding that the cost for commuter rail and Metrorail would be comparable and much higher than a bus option.
Chairman Esteban Bovo Jr. said requesting a change to the current study could delay development, cause confusion and repel potential state, federal and public-private partnership funding.
Instead, the county, which currently lacks the funds necessary to commit to a comprehensive overhaul of the transitway, should consider a phased approach in which construction would be done on facilities that need to be built regardless of what transit method is ultimately determined, he said.
“Commissioner [Bruno] Barreiro used to say, continuously, that if we had dedicated a mile a year, by now we’d have not only the South Corridor done, but another corridor done,” he said. “We need to be up-front with folks. We don’t have the money today to go to rail, but the work is being done, I believe, to get us where we want to go.”
If residents are getting any mixed signals, Mr. Moss said, it’s because they’re being told buses are the only option for the easiest of the six Strategic Miami Area Rapid Transit (SMART) Plan corridors on which to develop.
“There is a trust factor, and we don’t pass the trust factor smell test,” Mr. Moss said. “We don’t have a good reputation of history in Miami-Dade County of following through on promises to build transit in this community. If we continue down this road, we’re never going to build anything.”