Advertisement
The Newspaper for the Future of Miami
Connect with us:
Front Page » Government » County to vote on new civil courthouse site beside 1928 version

County to vote on new civil courthouse site beside 1928 version 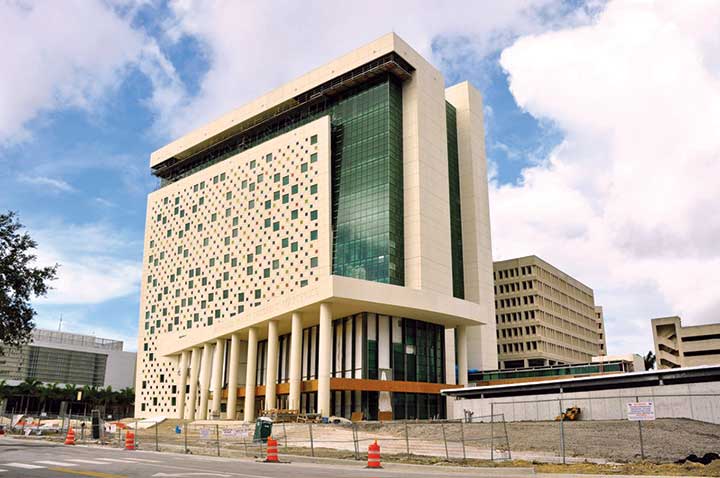 Miami-Dade may soon have a set construction site for a new civil courthouse, as commissioners are to vote next week on a parcel just west of the crumbling one on Flagler Street.
Commissioners at the Chairman’s Policy Council on July 12 unanimously forwarded to a full commission vote a resolution to build the new courthouse between West Flagler and Northwest First streets.
The parcel was acquired using federal transit funds, according to the memo, which states annual rent payments would be paid to the county transportation department for transit operations and maintenance costs.
The other site being considered, adjacent to the Miami-Dade Children’s Courthouse on Northwest Third Street, would be maintained for parking and provision of other children’s programs and services, the resolution states.
“We’ve heard a lot of testimony on the need of a new courthouse and opinions about the location,” Sally Heyman, the measure’s primary sponsor, said after thanking its supporters. “At the end of the day, this is a significant pinnacle facility we must replace.”
The landmark courthouse at 73 W Flagler St., built in 1928, is under constant repair, costs millions annually in remediation, has three floors currently out of service and no longer meets the county’s needs.
On April 4, Mayor Carlos Giménez recommended in a memo to build the new courthouse adjoining the children’s courthouse, based on a site comparison issued by the Internal Services Department.
The site next to the current courthouse, he wrote, would limit the county’s revenue potential and be constrained due to its smaller size – 21,000 square feet, half the size of the site next to the children’s courthouse. Conversely, the children’s courthouse site was closer to being build-ready and would minimize risk of added costs and project delays.
The two courthouses “could share facilities and people could go to one place for court,” the mayor told commissioners later that month, sarcastically adding, “Gee, what a concept: to put two courthouses next to each other.”
But Ms. Heyman suggested the lot would be used in expanding child mental health services.
Community stakeholders, including court personnel, nearby business owners and the Miami Downtown Development Authority (DDA), agreed, asking the county to build next to the old courthouse, county attorney Abigail Price-Williams wrote in a July 12 memo.
“[Without] adequate replacement, the absence of the employment activity would disturb the economic vitality of the Flagler District,” a Miami DDA resolution stated.
Keeping the facility in the area, where it would stand a short distance from Government Center, the Main Library and HistoryMiami, would preserve the historic value of the area, HistoryMiami Chairman Michael Weiser told commissioners last week.
“It’s a complex process that has a number of implications to it, but if done properly and if the right developer is selected, there’s a tremendous opportunity to build a civic center in the middle of Miami – something we can be proud of that speaks to the value of our community and raises up the civic life of our city,” he said.
Miami-Dade voters on Nov. 4, 2014, rejected issuance of $390 million in bond debt to build a courthouse. The county responded by soliciting public-private partnerships to design, build and maintain a replacement.
Last month, commissioners deferred to a full July 24 commission meeting a resolution to cancel such partnerships in favor of seeking a new hybrid joint venture and new construction timeline developed by BMO Capital Markets Corp., Perez & Perez Architects Planners and the county attorney’s office.
Commissioner Rebeca Sosa, who asked about the possibility of selling the old courthouse site, expressed concern over whether choosing a site marked genuine progress for the long-stalled project or just the next chapter in a series of false starts in coming up with a solution to replace the decrepit building.
“Are we going to continue going back and forth, delaying the process?” she said. “As the actual building deteriorates even more, it can cost the county a lot of money. Is this a step that is going to bring a solution faster, so we can stop using money to try to put a bandage on one floor [as] another floor breaks? Is this an advancement [of] our beautiful bureaucracy?”
Ms. Heyman requested a procedure waiver to allow the item, tentatively scheduled for a September hearing, to advance to a July 24 commission vote. Mr. Bovo, the commission chairman, confirmed it would.
“Beautiful bureaucracy,” Mr. Bovo said. “I didn’t know that existed.”