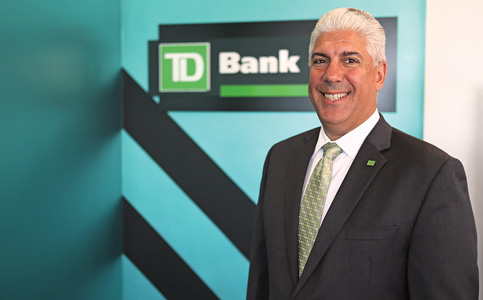 Nick Miceli celebrated two decades with TD Bank in November by moving from his native New Jersey to the Sunshine State, where as Metro Florida regional president he plans to expand the company while preparing for its future.

“I was attracted to the growth I’ve seen in the South Florida market, specifically Miami, and there is a tremendous amount of opportunity,” he said, adding the bank is building a middle market lending practice, developing infrastructure teams and plans to expand its existing corporate office footprint. “It’s the bed I made for my family and me, so we’re going to make sure it works.”

A more than 30-year veteran of the banking industry, Mr. Miceli took his first bank job in 1987 at United Jersey Bank, where he worked until 1994. After four years with Bank of America, he joined TD Bank as a middle market lender.

In 2003, Mr. Miceli was named TD Bank regional vice president of Essex County, NJ. He spent nearly a decade in his next role, as the bank’s commercial market president in the state.

A competitive sailor, piano player and home winemaker, Mr. Miceli has been involved in several benevolent groups in the Garden State. He continued his charitable efforts in Florida as part of the Orange Bowl Committee and the board of Camillus House.

“Working for TD, our main focus is not just on the bottom line,” he said. “It’s on investing in our people, our communities, employees and, obviously, in business.”

Mr. Miceli sat down with Miami Today reporter Jesse Scheckner in his Fort Lauderdale office. The interview was recorded by Jahmoukie Dayle and can be found Friday at http://bit.ly/2uNHy0Q.