Advertisement
The Newspaper for the Future of Miami
Connect with us:
Front Page » Government » Appraisers reach similar conclusions on soccer site’s value 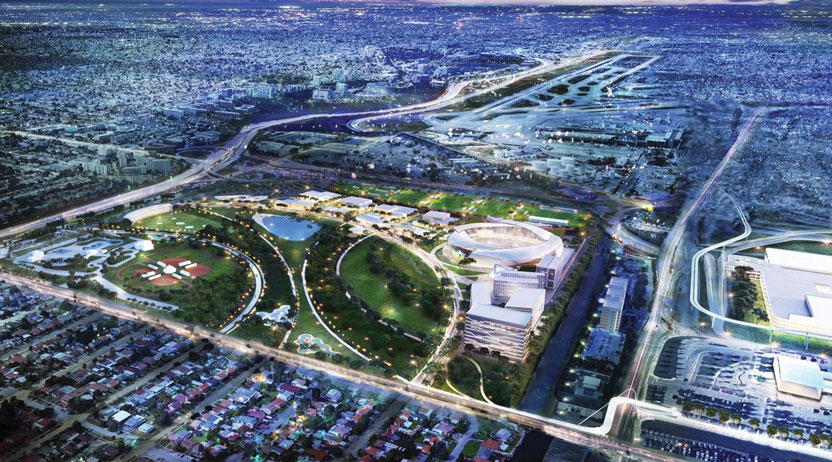 Two property appraisal firms reached similar conclusions regarding the proposed redevelopment of the Melreese Golf Course, stating the highest and best use would include higher density mixed-use with retail and office components.

David Beckham’s group wants to turn more than half of the site into a commercial office tech campus, along with a hotel and conference center, retail and entertainment, all anchored by a 25,000-seat soccer stadium for the Beckham Major League Soccer team.

Mr. Beckham and partner Jorge Mas are set to present their plan to build a MLS soccer franchise complex on the public site at today’s (7/12) Miami City Commission meeting.

Commissioners are expected to consider legislation placing the matter on the Nov. 6 ballot for voters to decide on a long-term lease.

The City of Miami owns the 18-hole course at 1400 NW 37th Ave., but private DeLucca Enterprises runs it.

The golf course is about 131 acres, bordered on the east by Northwest 37th Avenue, on the south by Northwest 14th Street, and on the west by Northwest 42nd Avenue. It hugs the city’s Grapeland Water Park, and is next door to Miami International Airport.

As details were being worked out between the city and Mr. Beckham’s group, two appraisal firms were hired to evaluate the golf course property.

In its cover letter, CBRE wrote: “The subject location is strategically situated at the northeast quadrant of the Dolphin Expressway (State Road 836) & NW 42nd Avenue (LeJeune Road) on the east side of the Miami International Airport and is an ideal location for a  higher density, mixed-use business park.”

CBRE concluded the as-is market value of the property at $160 million, and the fair market rent at $8.5 million a year.

Joseph J. Blake and Associates Inc., in its cover letter, wrote: “We conclude that if subject site were available for development, it would be purchased for mixed-use development that would likely include a retail component, a residential component and perhaps an office component…”

Those calculations – from both firms – considered the value of the entire 131 acres.

The lease is proposed for an initial 39 years, with two 30-year options to renew for a total of 99 years, with an annual base rent equal to the greater of $3,577,365, or fair market value as determined by two state certified appraisers, “in addition to any rent increases and/or additional rents negotiated by the parties.”

The proposed resolution would also authorize creation of a Park Infrastructure Fund by the city to which Miami Freedom Park would make a $20 million contribution (payable in equal yearly installments for 30 years) to defray the site development and other infrastructure-related costs for a public park of about 58 acres to be developed on adjacent property, currently used for the Melreese Country Club.

After being silent for several months, a flurry of information has been released in spurts about the plan to redevelop the golf course since the city published its agenda for today’s commission meeting.

And the plan, while offering a shopping list of details, is apparently still fluid as numbers have changed just in the last week.

Two big changes from the published agenda to the latest itemized list from the Beckham group involve the amount of office tech space and the addition of an attraction.

The resolution in the city agenda packet shows 1 million square feet of technology-related office space, while the list of specs released over the weekend lists a 400,000-square-foot tech hub and office space.

And the new list adds an undefined golf entertainment facility to the line-up.

Also over the weekend, Mr. Mas posted a video online touting the benefits of the Miami Freedom Park proposal, including job creation.

The video moves to show a bird’s-eye view of the rendering of the redeveloped site, with bold letter promises reading: “World class soccer village and technology hub; 110 acres of permanent green space; 23 acres of youth soccer fields, open to all; privately funded, no taxpayer dollars; $40+ million annual tax revenue for city, county, state and school board; $20 million donated to help the city activate the park; fair market value lease paid for land; 11,000 jobs created in the next 3 years.”

The video ends with: “This is Miami Freedom Park. Let the voters decide this November.”

■$1 billion invested in the city.

■600,000 square feet of entertainment, food and beverage, and retail.

The idea to redevelop the municipal golf course property surfaced in March.

Last year, it appeared Mr. Beckham’s group had settled on a vacant Overtown site for its professional soccer stadium, but the addition of partners and other factors led the group to begin exploring other areas, including the Melreese site, known as International Links Melreese Country Club.