Advertisement
The Newspaper for the Future of Miami
Connect with us:
Front Page » Communities » Casino giant Genting Group gears up for hotel/county bus terminal combo 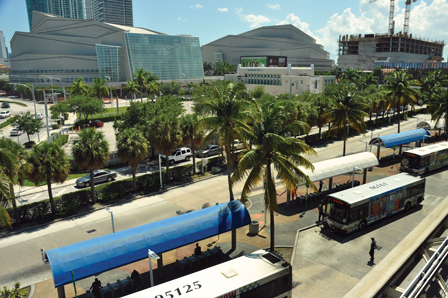 Resorts World Miami, a subsidiary of Malaysian casino giant Genting Group, is to build a temporary bus station east of the current Omni terminal on North Bayshore Drive in or near the fourth quarter of this year. The station is to take about six months to complete and be used by riders during reconstruction of the Omni terminal.

The temporary station marks the first major move forward for the joint development since its unanimous approval by Miami-Dade County commissioners on April 18, 2017.

A timetable for the total project, including construction of the hotel, retail space and upgrades to the adjacent Metromover station, has yet to be determined, Ms. Damian said, adding that to minimize service interruption and ensure maximum safety, the temporary station must first be built before improvements to the existing bus terminal and Metromover begin.

Permanent construction, to take place on seven parcels totaling 0.987 acres, includes a 300-room hotel and residential service apartments over the expanded bus terminal, according to a memo from Deputy Mayor Alina Hudak.

Ms. Hudak wrote that the project will promote maximum patronage of the transit system, provide functional and aesthetic integration of the Adrienne Arsht Metromover station and Omni bus terminal into the overall project, and improve or redesign the Metromover station by replacing stairs, elevators, escalators, surveillance systems and flooring, and enhancing site illumination and pedestrian accessibility.

Upgrades to the existing transit infrastructure are valued at about $22 million, according to the memo.

On January 27, 2015, the county requested proposals from developers interested in improving and building around and above the two stations. Genting’s Resorts World, Ms. Hudak wrote, was the sole bidder.

Genting Group also owns the Omni across the street and the old Miami Herald site to the east, where the company has sought to build a vast gambling resort.

The agreement includes a 90-year initial lease in which Genting pays the county’s transportation department $100,000 in minimum annual rent during construction, a $10 million one-time payment upon the project’s completion and either 50% of gross revenues generated from the development’s retail portion or $300,000 per year, whichever is greater.

An estimated 1,871 jobs will be created during construction, Ms. Hudak wrote, with 171 direct and 100 indirect jobs established after completion of the project, which is to be funded exclusively by Genting and generate an estimated $54.85 million over the lease term.