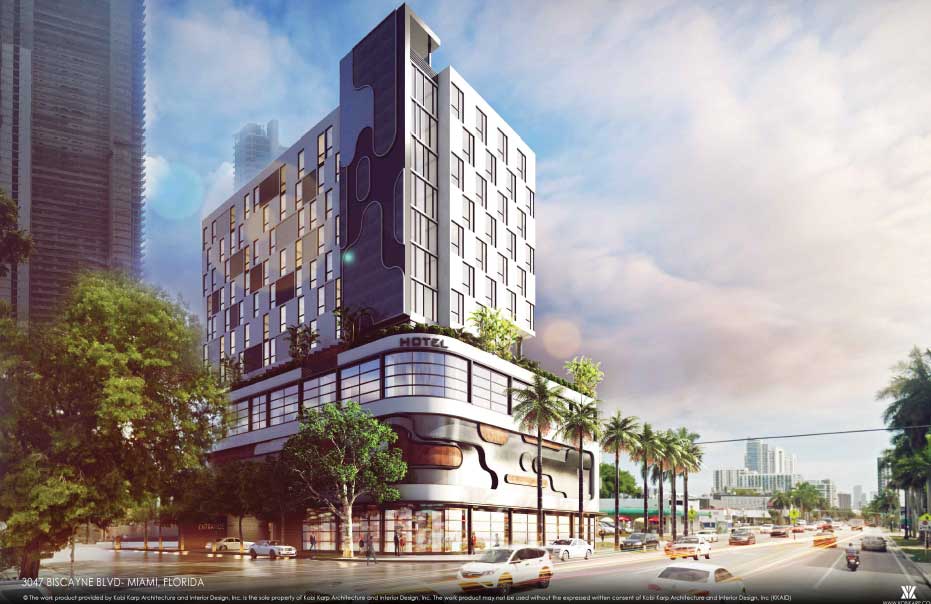 A new hotel is planned for the Edgewater neighborhood of Miami.

Prime Biscayne Property LLC has submitted plans to construct a 13-story mixed-use hotel at 3047 Biscayne Blvd., at the southeast corner of the intersection with Northeast 31st Street.

The city’s Urban Development Review Board voted June 20 to recommend approval of the project with conditions.

No official name was revealed, nor hotel flag being considered. A working project name of Biscayne Development was on some of the plans.

The site is in an area that has undergone tremendous development in recent years, including a variety of apartment and condo towers on or near the waterfront, a few blocks to the east.

The proposed hotel would have 137 rooms, and about 80% lot coverage.

Two levels of parking would be provided for about 130 vehicles. The plan includes 6,872 square feet of commercial uses, and about 10,575 square feet of office space.

Site plans show the offices on the fourth floor and some amenities on the fifth floor.

The developer is requesting waivers, including allowing parking into the second level off primary frontage and secondary frontage, and a narrower driveway.

Attorney Miguel Diaz de la Portilla, representing the developer, said the waivers were minor and the result of constraints on the small site.

“We believe the design meets and is compatible with the area,” he said. “We believe this will be an asset to the Biscayne corridor.”

The hotel rooms would be on the sixth through 12th floors.

Board member Fidel Perez told Mr. Karp he did a great job on a difficult site. Mr. Perez said he had one issue: using only lifts for the parking.

“I feel that’s going to be a problem,” said Mr. Perez, who asked the developer to devote some of the parking to self-serve spots for the office tenants, rather than relying on valets and lifts.

“Congratulations. It’s a very nice project and fits into the scale for that area,” said Mr. Permuy. He said he also liked the design of the podium with its “soft corners,” but said that design element didn’t continue on up the tower.

Mr. Karp said he would look at ways to soften the tower façade as well.

Mr. Permuy also asked that for safety, a window be put into the loading control room or dock.

Acting Chairman Neil Hall called it a wonderful project and praised the designers for tackling issues with creative solutions.

Mr. Karp said he was confident the developer’s team can work out the best solution for the loading entrance.

The motion to recommend approval includes a condition that the developer consider self-service parking for office users, and noted the review board endorsed the developer’s location for loading at the building off of Northeast Fourth Avenue.