Advertisement
The Newspaper for the Future of Miami
Connect with us:
Front Page » Top Stories » Plans for Brickell’s dual-flag hotels underscore the impact of Underline 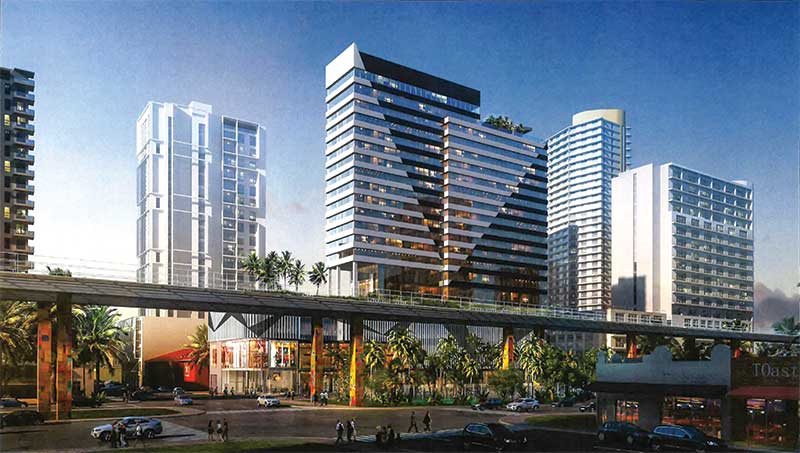 The Underline, a planned 10-mile linear park and urban trail, is barely off the drawing board but is already being touted as a neighboring asset for a major mixed-use project proposed in Brickell.

C-F Brickell LLC plans to construct a dual-branded hotel with 264 rooms, about 25,000 square feet of retail stores, and a rooftop terrace and bar.

The property is at 110 SW Seventh St., 721 SW First Court and 115 SW Eighth St., just south of the elevated tracks of the county’s Metrorail.

The Underline will run under the tracks on county-owned land known as the M-Path.

The working project name for the double hotel is 115 SW 8th Street, and it replaces the former El Eden motel, recently demolished in anticipation of the new project.

The City of Miami’s Urban Development Review Board recommended approval of the project, with a few conditions.

The building is to be 21 stories, and have 228 parking spaces on four levels.

According to documents filed with the city, the building will be 257,590 square feet of floor area, and be 253-feet 6-inches to the top of roof mechanical equipment, and 220 feet to top highest habitable floor. A site plan shows about 3,885 square feet of open space.

The developer is an affiliate of Robert Finvarb Companies, according to attorney Steve Wernick. He said the hotel is being built in an area undergoing significant transformation.

The site is about a block south of the Miami River, and just west of booming Brickell City Centre.

In his comments to the board and in his application letter, Mr. Wernick mentions the nearby Underline, noting the section between Seventh and Eighth streets is to have a basketball court, among other elements, all designed to activate the neighborhood.

The dual-branded hotel will fit right in with its nearly 25,000 square feet of ground floor retail on all sides, and extending into the second level off of Southwest Eighth, he said.

“The Project is comprised of roughly .66 acres and located in one of the most dynamic evolving urban core neighborhoods in Miami, immediately adjacent to the Phase I of the Underline in Brickell and well-served by transit,” wrote Mr. Wernick.

He said the changing neighborhood may become one of the most walkable in a few years.

“Taking its cues from the Underline and recent large-scale redevelopment projects in the surrounding area, the Project will transform this former auto-oriented motel site – known as the El Eden for the past 25 years – into a key mixed-use focal point of energy in the neighborhood, enhancing the quality of the pedestrian realm and urban fabric, and providing retail shopping accessible to local residents, office workers, and hotel guests,” Mr. Wernick wrote.

The dual-branded hotel is a true mixed-use with its commercial floor space offerings and is pedestrian oriented, he said.

“We really see this as a dynamic project,” he concluded.

Mr. Fort detailed some of the site plans and renderings. He said the contextual massing of the new structure will be consistent with neighboring towers.

Mr. Fort also mentioned the project helping to activate the area and The Underline.

The project will have a swimming pool and other amenities, and include a sky lobby on level six shared by the two hotels, which will also share the elevators. Meetings rooms are also planned.

Board member Fidel Perez said the building looks excellent. “Arquitectonica comes across again,” he said. But he did take exception to the lack of setback. He said there is zero setback on Seventh Street, and “I think it should be set back.”

Mr. Fort mentioned the hardship caused by such a narrow site, noting they tried to push the building northwardly when deciding placement.

Board member Gerald Marston, a landscape architect, said the plans he was looking over were woefully short on street trees for the new building.

Mr. Wernick said tree placement would adhere to the landscaping plan the developer has filed for the project.

Acting Chairman Neil Hall said there were several wonderful things about the proposal but the façade seemed too plain; just gray and white. “I don’t see that articulation,” he said.

Mr. Fort pointed to design elements that he said clearly define the two different hotels. Bump-outs, stucco and recessed glass are used to help separate the hotels, yet they are joined in one structure or tower.

Board member Ignacio Permuy congratulated the developer’s team on “a very positive addition to the area.” He said the project is “very creative.”

The vote to recommend approval included conditions that an attempt be made for further setback of the building on Seventh Street, and the developer try to remove some on-street parking spots to make room for more street trees.

The developer is requesting waivers to provide for adjustment to building setbacks, parking standards and lot coverage.

The project also requires a warrant for the outdoor dining area on the 21st story facing the river.