Advertisement
The Newspaper for the Future of Miami
Connect with us:
Front Page » Government » Greater Miami Chamber of Commerce pushes in DC for trade, immigration, higher education 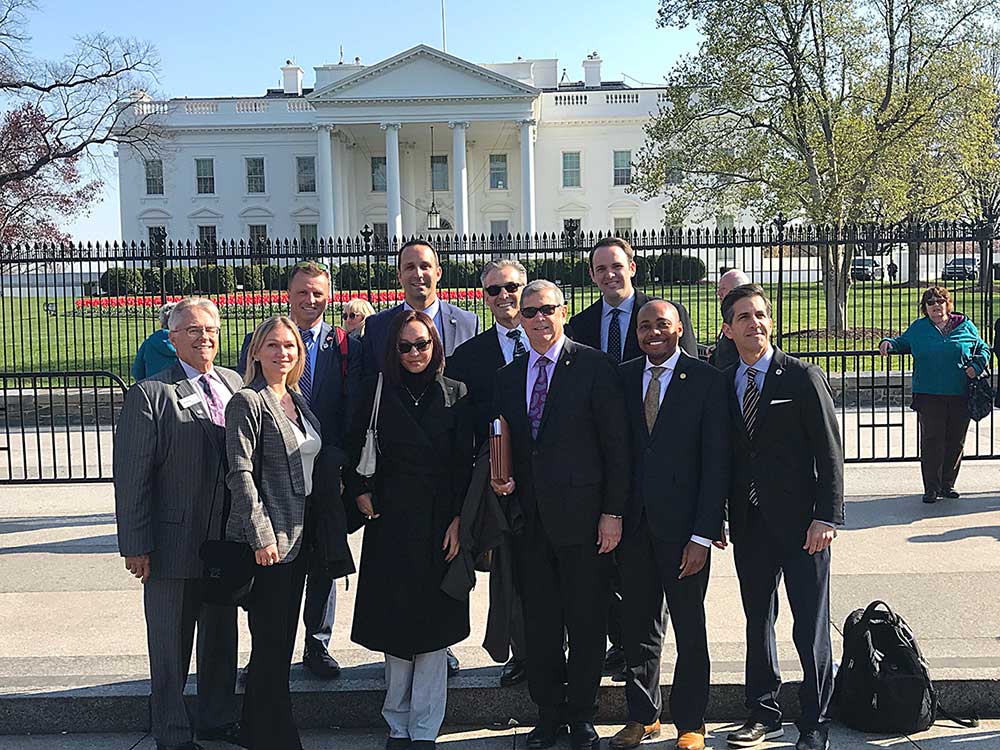 One particular issue that was discussed at length, said Scott Plyant, the chamber’s director of government affairs, was promoting public transportation to help alleviate traffic and congestion throughout South Florida.

“Chamber members discussed its priorities for transportation, including promoting public transportation in the form of an expanded train or light rail, during meetings with Congressman Mario Diaz-Balart; Sen. Bill Nelson; Debbie Wasserman Schultz, member of House Appropriations Committee; and the US Department of Transportation,” Mr. Plyant said.

As a result, he said, “the delegation left with the understanding that Greater Miami needs to tee up a transportation project in the coming months in order to get into FY2019 appropriations” to help tackle transportation issues currently plaguing South Florida’s roads and highways.

“During our first day in Washington,” Mr. Plyant said, “we attended a lunch and heard a briefing from Kevan Stone, the National Association of Counties’ (NACo) associate legislative director for transportation.”

“He also informed us that the omnibus spending bill had positive potential for Miami transportation because of higher levels of grant funding,” he said, and “the day before we arrived, the US Department of Transportation and other agencies signed a memorandum of understanding to agree to perform parallel permitting to expedite the process.”

Some of the elements of the omnibus spending bill that could be utilized to improve South Florida’s transportation, according to the US Department of Transportation’s website, include an increase in funding for several transportation infrastructure programs, including those for roads, bridges, airports, ports, rail and transit among competitive grant programs that the department administers.

“Our goal,” Mr. Plyant said, “is to continue to have an open dialogue with elected officials about how to improve South Florida’s transportation issues moving forward.”

As for issues regarding higher education, Glenn Cooper, the chamber’s governmental affairs committee chair, said, “On our second day of the trip we organized a meeting with secretary of education Betsy DeVos on behalf of our higher education members, Florida International University and the University of Miami.”

“They [representatives from the universities] shared concerns regarding the Higher Education Reauthorization Act, including student loans and Title II funds,” he said. “We also thanked her for authorizing a $1 million project school emergency response to violence grant.”

“We hope that this united front held by FIU and UM,” he said, “improves their position and is a sign of future collaboration.”

As for immigration issues, Mr. Cooper said, “We really focused on discussing potential positive solutions regarding DACA and how to maintain and improve the EB-5 Immigrant Investor Visa Program for foreign nationals.”

“We met with the director of the US State Department’s Office of Field Operations and Visa Services and his senior staff,” Mr. Cooper said. “We brought three issues to their attention, which included positive DACA resolution, importance of the Haitian community to South Florida business, and the impact of the temporary protective status [TPS] program and maintaining and improving the EB-5 Immigrant Investor Visa Program for foreign nationals.”

However, he said, “the State Department was not hopeful that a DACA solution would occur before the November elections and they also indicated that they’re now looking at strict adherence to TPS laws.”

As for discussing trade issues, Mr. Plyant said, “we met with the Embassy of Canada for a joint US-Canada trade briefing.”

During the trade briefing, he said, “both sides agreed that in evaluating NAFTA, it’s key to remember how the entire free trade bloc has increased and performed.”

“They also encouraged us,” he said, “that a global trade position increase outweighs individual wins and losses.”