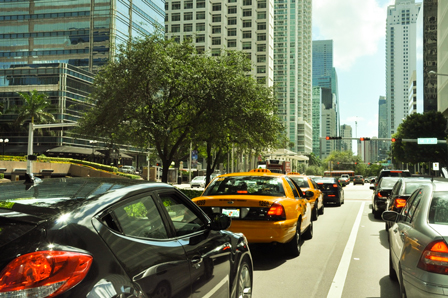 The Coast Guard says it’s willing to test an altered schedule for opening the Brickell Avenue Bridge if others deliver on four key changes to the clogged roadway crossing the Miami River.

On May 29, James Wolfe of the Florida Department of Transportation (FDOT) wrote to the Coast Guard requesting changes to scheduled bridge openings. They include trimming the morning operating curfew by 30 minutes, with a corresponding increase of 30 minutes to the afternoon curfew.

This letter asking for an altered schedule to keep the bridge locked down and open to street traffic during peak hours followed a meeting of stakeholders including the Coast Guard, FDOT, Downtown Development Authority and Miami River Commission.

The Coast Guard is in charge of bridge operations, as the river is a federal navigable channel. FDOT is responsible for Brickell Avenue and the roadbed crossing the river.

In response, Coast Guard Capt. L.A. Allen sent a letter to Mr. Wolfe on June 8 setting forth potential actions that could lead to a Coast Guard “test deviation from the existing regulation for a period of up to 180 days.”

Ms. Allen’s follow-up reads, “However, any deviation or change to the existing Brickell Bridge regulation would be ineffective without implementation of a broader, comprehensive plan to address the vehicular traffic issues.”

The DDA has long sought solutions for Brickell-to-downtown gridlock and waged battle with the Coast Guard, FDOT and river commission over what it calls improper bridge openings that bring street traffic to a standstill.

When the drawbridge is opened, road traffic snarls, impacting downtown and Brickell businesses. When the bridge is down and ships await a scheduled opening, shipping halts.

The river commission has proposed more than a dozen ways to ease bridge jams, including opening all three lanes in each direction to cars, installing pedestrian gates and adding real-time signage on bridge approaches to tell motorists to take a different route.

Ms. Allen’s letter refers to some of these, with a hint at some resolution.

“If implemented, any period of test deviation should be used by FDOT to conduct reliable traffic studies that will provide valid metrics upon which a satisfactory cooperative plan for future action can be based,” she wrote. “To aid in my consideration of the request to change the Brickell Bridge curfew periods, please identify a period of time when a test deviation could be accompanied by both appropriate traffic data collection and implementation of these additional measures…:

a. Pedestrian gates to prevent pedestrians from delaying drawbridge opening.

b. Maximizing the number of open traffic lanes.

d. Policing the area to assist with traffic and pedestrian law enforcement.”

Horacio Stuart Aguirre, river commission chair, knows of the FDOT letter and Coast Guard response, and says he intends to have the bridge operation on his July 9 agenda.

“I will have the item on the agenda so any party that wants to be heard or stated on the record can do so,” he wrote to Miami Today in a Tuesday email.