Advertisement
The Newspaper for the Future of Miami
Connect with us:
Front Page » Communities » Adler unveils ambitious plan for Miami’s riverfront 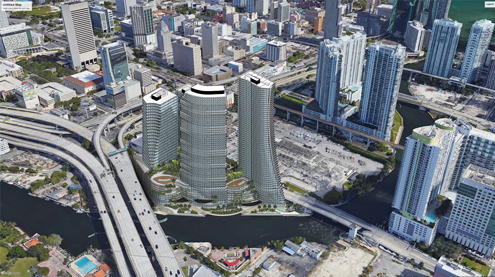 The Adler company has quite an ambitious plan to transform the downtown riverfront in Miami, and is moving toward a major redevelopment of prime real estate on the Miami River.

On Monday, Adler representatives shared information on a plan that could bring a new hotel to the river, along with about 37,000 square feet of retail stores, framed by three to four towers.

The Adler team met with the Urban Infill and Greenways Subcommittee of the Miami River Commission, on its way to a July 9 meeting before the full river commission.

The current goal is to get the Miami City Commission to approve a referendum on the fate of the city-owned property at 444 SW Second Ave. on the November ballot.

The high-profile parcel is home to the city’s Miami Riverside Complex and adjacent to city-owned open green space with three boat slips.

The city charter requires city voters to approve the lease or sale of city-owned waterfront property. This plan would involve the sale of the city’s property to Adler.

The committee recommended the full river commission support proceeding to election, with conditions: the plan comply with code requirements for a 50-foot setback from the water and construction and maintenance of a public riverwalk; provide a view corridor; maintain existing boat access; and consider coastal flooding in design, using data from the city.

A key component of the plan has Adler or one of its affiliates providing a new office complex for the City of Miami. The committee didn’t discuss this, as its main focus is on the riverfront.

The city administrative complex is on choice land near downtown and Brickell, at Southwest Second Avenue and Southwest Third Street, directly across the river from a planned mixed-use development to be called Miami River. Across the site to the east, on the other side of Southwest Second Avenue, is a large electrical grid station of FPL. To the west and a bit north is a state-owned parking area (under I-95), connected to a planned mixed-use project called The Wharf.

The site is also kitty corner to Jose Marti Park, across the river to the west.

While Adler representatives didn’t discuss the status of plans for a new city office complex, they did offer some new ideas in what they’re calling a conceptual plan.

Other parts include an 8,963-square-foot hotel lobby, facing the river; main parking levels to the north end of the property; about 35,145 square feet of amenity decks on three of the buildings, plus 13,087 square feet of office amenities on a planned office structure at the northwest corner of the site.

Mr. Reyes said the design and look of the overall project is intended to be “less urban and more about the river.”

As part of that goal, he explained site development that has open views of the river and public access to the water from several directions, and the lush landscaping and treatments to the public riverwalk the full extent of the site.

The idea was to expand that riverwalk experience through much of the site, he said.

“The ground floor is really dedicated to the public realm, creating an experience for the public,” Mr. Reyes said.

He pointed to renderings showing a curved entry walkway with a central green space, open to the sky. There is also planned a water feature in this area, he said.

Mr. Reyes showed design drawings of the planned second floor perch, which would be more private for residential tenants and hotel guests to enter and exit. It includes a centralized drop-off area that leads to a balcony.

“You can look right out to the river,” he said.

He said the planned façade of the towers includes scattering the size and depth of balconies, to avoid a straight wall. The recreational amenities decks include swimming pools.

The design and placement of the towers was made with the goal of giving all residential units an openness, he said. “We wanted everyone to feel they live on the river,” he said. “We want all of the units to have some kind of fantastic view.”

Committee Chairman Jim Murley explained the limited focus of the committee and river commission at this stage of the project. He noted that if voters OK the sale, more detailed plans will come back for a more in-depth review.

He liked what he saw Monday. “The buildings are remarkable,” said Mr. Murley.

The smaller city-owned site next door has three permitted boat slips. Discussion Monday explained that the city’s request for proposals was on both city lots, and the current Adler site plan does not include the three inlet slips, though the latest renderings do show boats tied up to the seawall.

“We don’t like to lose public space on the river,” said Mr. Murley of river commission members.

The reuse of the city’s riverfront property was first considered in 2015.

The Urban Infill Subcommittee’s Sept. 23, 2015, meeting minutes read: “MRC Urban Infill Chairman Murley suggested the Miami River Commission recommend the City of Miami maintain ownership of 460 SW 2 Ave, or provide covenants and guarantees that any future owner will maintain its current use which serves as an undeveloped public park with a public Riverwalk and three valuable waterfront slips which could generate re-occurring revenue source to fund maintenance of the public park and public Riverwalk. Chairman Murley suggested the MRC further recommend the City of Miami increase its riverfront public park space, do not lose riverfront public greenspace, and host a public planning process of how the reserved park space might be better integrated into the public Miami River Greenway.”

At the Oct. 5, 2015, meeting of the full river commission, member Sallye Jude made a motion to recommend the city retain ownership of 460 SW 2 Ave, and maintain its use as a public park featuring the public riverwalk and three boat slips. The commission adopted the motion 8-2.

This was brought up Monday but it was noted the city’s request for proposals was issued later, and included both city parcels.

In early 2016, with the assistance of CBRE Inc., the city solicited proposals to relocate its administrative hub and subsequently dispose of the riverside facility.

On June 8, 2017, city commissioners voted to hire Weiss Serota Helfman Cole & Bierman as special real estate counsel to work with the city attorney in those negotiations. Commissioners said the matter is so big and complicated they wanted an outside real estate expert to help the city get the best deal.

The city’s riverside complex is more than 25 years old and “unable to fully and satisfactorily meet the city’s future operating and client service needs,” the request for proposals said.

The goal is a new Class A space for city administrative offices within city limits that will “functionally, securely and conveniently serve the citizens of the City of Miami.”

Adler proposed constructing a 375,000-square-foot office building for the city elsewhere, listing three possible locations: near the Lyric Theater in Overtown, next to Marlins ballpark in Little Havana, or as part of a mixed-use project on county land surrounding the Douglas Road Metrorail Station being built by an affiliate of Adler.