Advertisement
The Newspaper for the Future of Miami
Connect with us:
Front Page » Government » Miami to seek $34 million Hurricane Irma repayment

Written by John Charles Robbins on May 22, 2018
Advertisement 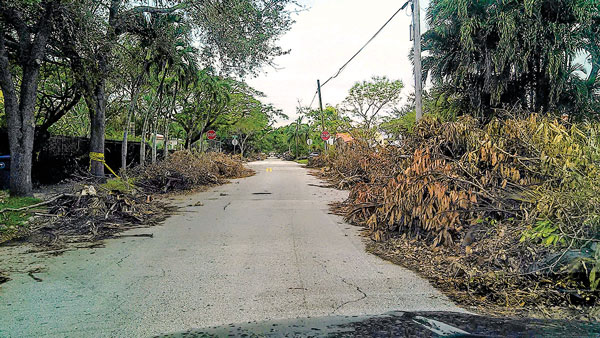 Most people agree that Hurricane Irma walloped the City of Miami last September, but it could have been so much worse.

City officials and elected leaders have used words like “wake-up call” to characterize Hurricane Irma, as they praised city workers and volunteers for helping with emergency needs in the hours and days without electric power, and in the days and weeks that followed to rid streets of storm debris.

The city government had emergency funds to ease the immediate pain, while noting from the start how important it would be to itemize the damages in order to earn eligibility of all-important reimbursement dollars from the federal government.

In the early days after the storm, Christopher Rose, director of the Office of Management and Budget, said the city would be seeking FEMA (Federal Emergency Management Agency) reimbursement according to the Federal Stafford Act for most storm-related costs.

About eight months or so since Irma’s wrath and city officials have filled in all of the necessary forms, with “i”s dotted and “t”s crossed, the reams of bureaucratic paperwork have been readied for submission in order to secure vital reimbursement funds.

City commissioners are to consider a vote on a request for reimbursements today (5/24).

The commission is asked, by a four-fifths vote, to approve the necessary submissions by the city manager, finance director, budget director, departments and officials of requests for Hurricane Irma cost reimbursements from US Department of Homeland Security (DHS) Federal Emergency Management Agency, and the State of Florida Division of Emergency Management.

The resolution would establish a special revenue project entitled “Hurricane Irma Federally Funded Sub Awards and Grants Fiscal Year 2017-2018,” appropriating funds for the reimbursements of city funds expended in connection with the hurricane, currently estimated at $34,193,228.

Reimbursements from insurance proceeds based on claimed locations are estimated to total $9,429,373.

The resolution says that before, during and after Irma, the city manager, finance director, budget director, procurement director and others undertook steps necessary under emergency circumstances to submit Hurricane Irma costs and expenses for reimbursement to FEMA and for insurance proceed awards.

The US Department of Homeland Security through FEMA is authorized to provide funds to local governments directly through grants, and to states for subsequent distribution to local governments through sub-awards, to address the eligible reimbursable costs and expenses of natural disasters in emergencies, and to mitigate against future natural disasters.

The federal government is expected to reimburse up to 90% of debris removal costs, while other costs are reimbursed at 75%.

A few weeks ago, commissioners confirmed the city manager’s emergency finding that Irma caused a valid public emergency to city facilities, making it advantageous for the city to waive competitive sealed procurement procedures and authorizing the manager to use architectural, engineering and landscape consultants currently under contract in order to complete repairs “due to exigency or emergency circumstances.”

An exhibit listed these city-owned properties damaged by Irma: