Advertisement
The Newspaper for the Future of Miami
Connect with us:
Front Page » Transportation » Dolphin Expressway getting double-decker elevated Viaduct

Written by Jesse Scheckner on May 22, 2018
Advertisement 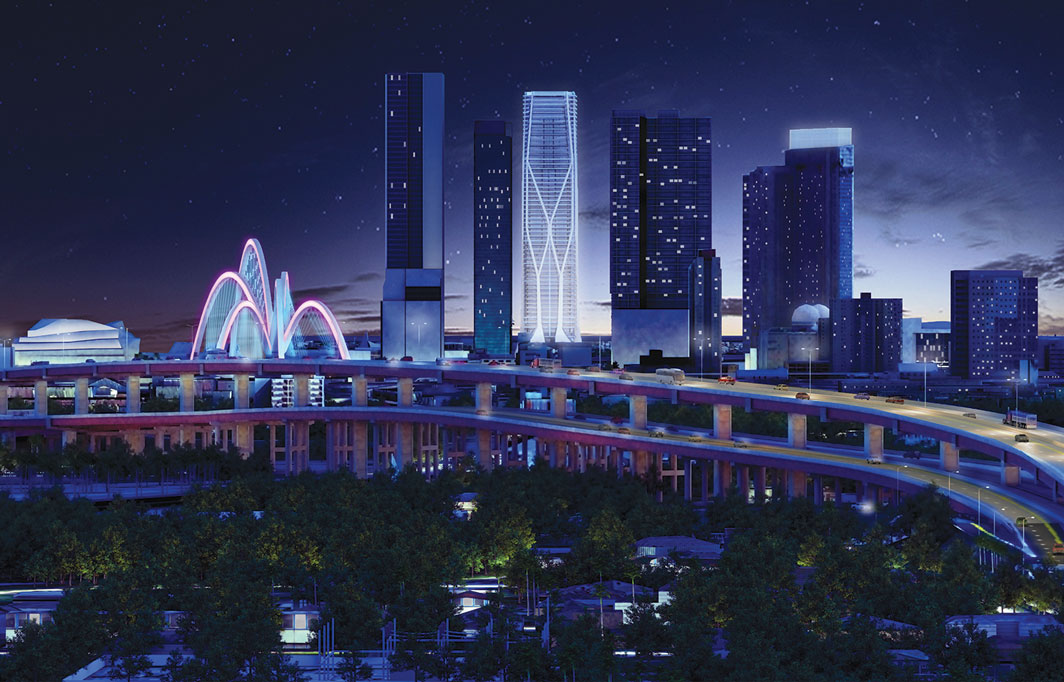 A new project on the Dolphin Expressway – State Road 836 – could improve access and alleviate congestion by creating a double-decker elevated bridge over the existing highway, tentatively named the Viaduct, along one of Miami’s most crowded thoroughfares.

The project, funded by $186 million in toll revenue from the Miami Expressway Authority (MDX), is intended to modernize the 836 corridor between Northwest 17th Avenue and the Midtown Interchange.

It will feature two lanes in each direction positioned over the median gap between eastbound and westbound lanes on the 836. Ramps to and from 836 and I-95 will allow drivers to enter and exit from below, “[reducing] the existing weaving movements resulting in enhanced safety and better traffic operations on SR-836,” a Florida Department of Transportation project document states.

Designs show the Viaduct beginning just east of the Northwest 17th Avenue toll area, bypassing the I-95 interchange and connecting to I-395.

“You’re going to have the option to stay on the existing bridge that’s there today or get on this new viaduct,” MDX Director of Engineering Juan Toledo said Tuesday. “If you want to go down toward the beach or take I-95 north or south, basically what it’s going to do is separate those movements so it kind of distributes traffic flow more efficiently and eliminates those bottlenecks you have there with people trying to go to I-95 north at the last minute or I-95 south. You’re eliminating a lot of those operational deficiencies by separating those traffic movements.”

The design and construction is part of an $802 million private-public partnership between the Florida Department of Transportation and MDX that encompasses three components: the Viaduct, I-95 pavement reconstruction, and I-395 improvements including a signature bridge spanning 1,025 feet over Northeast Second Avenue and Biscayne Boulevard that will “[redefine] the Miami skyline with its six sweeping arches,” according to a technical proposal from Archer Western-de Moya Joint Venture, the construction group on the project.

In addition to reducing impact to the Miami-Dade Courthouse parking area, the proposal states that construction plans cut down on right-of-way acquisition by building over an existing property, 836, thus mitigating its effects on the nearby Grove Park historic neighborhood.

“The original concept was to widen the bridge to four lanes in each section,” Mr. Toledo said. “What [the Viaduct] does is keep the envelope the way it is, so we can minimize the areas we would have been impacting.”

The construction also affords MDX a long-term solution to rebuilding the existing 836 expressway, whose major structures were erected in 1968 and are nearing their design service life, according to the proposal.

The Archer Western-de Moya team is comprised of Archer Western Contractors, an Atlanta-based construction company that is part of The Walsh Group, the 11th largest contractor in the nation, according to its website; and The de Moya Group, a Miami-based highway and bridge construction company specializing complex infrastructure projects in Florida.