Advertisement
The Newspaper for the Future of Miami
Connect with us:
Front Page » Communities » County looks at regulating bike-sharing companies 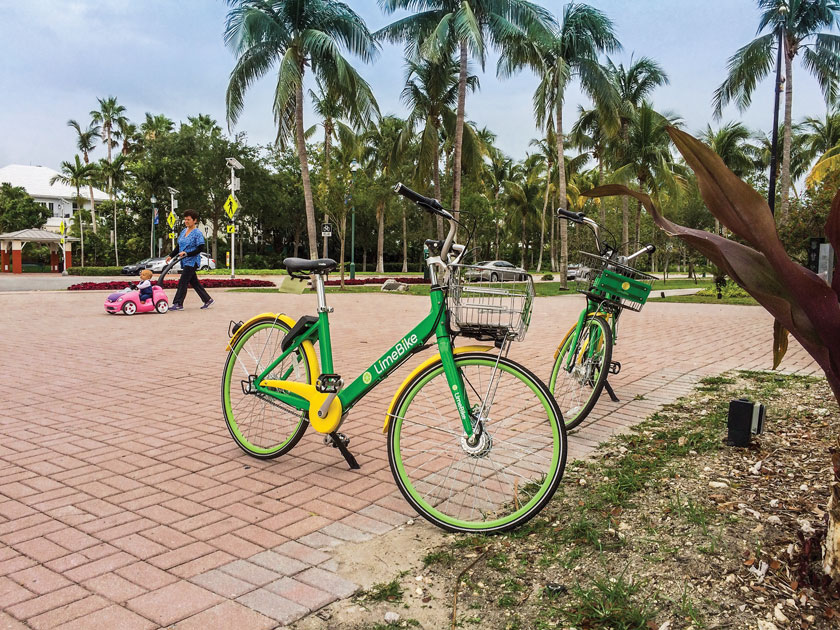 Something must be done to regulate bike-sharing companies like LimeBike, which have thousands of bikes scattered across the county, Miami-Dade Commissioner Javier Souto told the Economic Development and Transportation Committee last week.
“Neighbors complain about the bikes being just thrown in front of yards, left [on] sidewalks,” he said. “We have an inflammation of ‘bike-itis.’ There has to be a way to bring order.”
While Citi Bike in Miami Beach, North Miami Beach and several downtown areas uses solar-powered docking stations to rent and collect its bikes when not in use, newer bike-sharing companies have eschewed stationed docking and instead depend on customers leaving their bikes on public property.
Three such operations are now in Miami-Dade County: California-based companies LimeBike and Spin, founded in 2017 and 2016; and Ofo, which was founded in 2014 in Beijing and made its stateside debut in 2017. All three companies use mobile apps to help customers find and rent their bikes for as little as $1 per hour.
Customers can find available bikes nearby using their phones’ GPS systems, and scanning each bike’s unique digital code disengages a rear-wheel smart lock that inhibits unauthorized riders. Once they’ve reached their destinations, riders need only re-engage the lock, which makes the bike available to others.
The committee chair, Rebeca Sosa, seconded Mr. Souto’s complaint, which was not on the agenda for discussion.
“Who controls them?” she asked. “Who sets the guidelines? Where are the locations selected to have them? What is the responsibility of whoever rents a bike to bring it back, or do they pay extra if they don’t bring it back? We would like to hear all the information from the administration and from the legal side.”
In July 2017, one month after LimeBike entered the South Florida market through Key Biscayne, Miami Beach city officials pushed back against the company with $1,000 fines, warning the city would impound any LimeBikes obstructing the public right-of-way. The company responded by collecting stray bikes, though bikes frequently return to the area.
Some municipalities struck deals with the companies. Between July and December 2017, Key Biscayne, Miami Shores and North Bay Village inked contracts with LimeBike. In November, Spin entered into exclusive arrangements with Doral and Miami Lakes. That same month, the City of South Miami welcomed Ofo to the area with a city hall celebration.
“Station-free bike-sharing is another way to bring another technology to our community that can change the way residents experience their city, help tourists get around, improve access and positively impact our environment,” South Miami Mayor Phillip Stoddard said at the time.
Today, thousands of green, orange and yellow bikes are strewn throughout the county, and more are on their way. A uniform means by which to regulate them, Mr. Souto said, is necessary.
“We started with one company,” he said. “Now we have three or four companies – different colors, different things – and really, my guys are getting nervous.”
Ms. Sosa said a resolution addressing how the bike-sharing companies will be managed, with Mr. Souto listed as its primary sponsor, will be written for future discussion.