Written by Marcus Lim on May 8, 2018
Advertisement 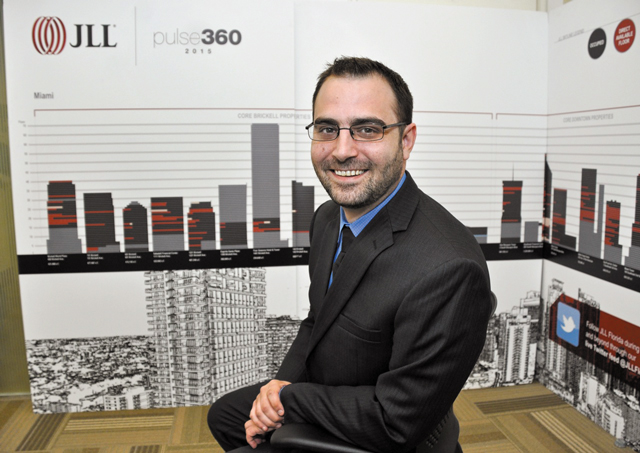 Miami-Dade’s office market in the first quarter showed prices markedly above three years ago but vacancy rates also higher, with the central business district in particular having growing vacancy. Despite a changing landscape, experts say they aren’t worried, as reports show the market on track to surpass absorption levels due to increased popularity in co-working offices.
A presentation of the disruptors and future of the South Florida office market was given last week at WeWork, hosted by the Commercial Industrial Association of South Florida (CIASF). The report aimed to analyze trends, disruptions, solutions and revolutions for the market.
The report compared the overall asking rent and overall occupancy in 2015 and 2018. Three years ago, the average full service asking rent was $33.60, whereas now it’s $37.77, showing the increase in price. Occupancy was 87.1% in 2015 and currently it’s 86.5%, slightly lower but not a concern to Marc Miller, research manager of JLL, who gave the presentation detailing the findings.
“What we saw is a slight uptick due to the amount of space delivered to the market, but we have seen tenants have an appetite for these high-quality class A spaces,” Mr. Miller told Miami Today. “That slight uptick is more of a blimp in the radar than anything worth getting concerned over.”
Tenants seeking quality space has been a key reason for the office market’s success. Since 2010, 82% of all absorption gains have been in Class A spaces. Developments since 2016 have outperformed the overall market. Specifically, co-working space has burst on the scene pretty quickly, with many companies favoring the physical open space.
“Co-working space is one of the biggest differentiators. It wasn’t before, but now it is one of the largest drivers in the Miami office market,” Mr. Miller said, “the whole idea of a hospitality-type approach to space management.”
Despite rapid growth, the co-working segment accounts for a small proportion of total office stock but an outsized portion of space in Miami compared to the nation. Miami has 1.2 million square feet of co-working space, 3.3% of all inventory. That’s much smaller than New York’s 6.5 million square feet, but that represents only 1.4% of New York’s inventory.
With the workplace being more than just a space to work, where workers spend the majority of their week at the office, companies are looking to real estate strategies to improve their productivity and talent retention. Open spaces that invite collaboration and with many amenities have seen increased leasing activity.
“There is an extreme intentional movement in organizations to establish opportunities for purposeful collaborations in open space that will spark ideas,” said Alan Kleber, managing director of JLL and a panelist for the event. “The whole reason we have space is to drive productivity and drive revenue.”
That workplace strategy has also taken a key role in a shrinking footprint. An example given was that a company five years ago may have taken 10,000 square feet, but now because of strategies designed on utilizing space more wisely, and more open-space concepts, that company may only need 8,500 square feet.
“There is this crossroad where we can all work remotely; we don’t have to sit behind our desks to be productive,” said Brian Gale, vice chair of Cushman & Wakefield and a panelist for the event. “But not being at the office is an opportunity lost, hearing about deals or opportunities. It’s amazing how much information you can get from being at an open space where breakout sessions occur.”
Additionally, the report analyzed the pipeline, where combining what is under construction and what is proposed or in the planning stage, the office market can see an inventory increase of 8.3%, with Coconut Grove’s inventory possibly increasing by over 20%. Mr. Gale also observed, “if all that is proposed gets built, there will be a huge oversupply and that will negatively affect the market.”
Because of the rise and reliance on co-working space, Miami’s central business district (CBD) is “extremely” impacted. In the previous five years, nearly one-third of all new-to-market square footage leased in the CBD has been driven by co-working space, followed by bread-and-butter drivers. Mr. Miller said that’s why it isn’t a concern – the industry is changing and the sector should change its methods in order to stay ahead of the curve.
“We are changing as an industry and we need to adapt. What is coming is not stopping,” he said. “We are traditionally very averse to change in the real estate industry, but we have to adapt pretty quickly.”