Advertisement
The Newspaper for the Future of Miami
Connect with us:
Front Page » Government » City of Miami swap of its riverfront office tower moves ahead

City of Miami swap of its riverfront office tower moves ahead

Written by John Charles Robbins on May 8, 2018
Advertisement 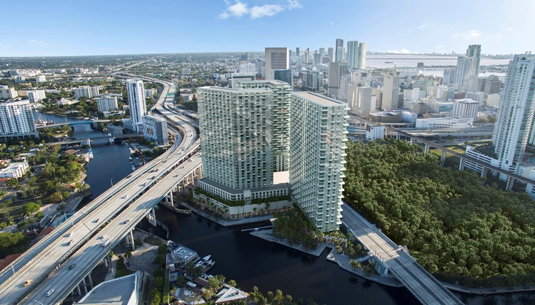 A high-value deal to build new City of Miami offices and open up riverfront for a three-tower private development could go to city voters in November.
The city charter requires a referendum on any sale or lease of city-owned waterfront.
The city aims to sell or lease Miami Riverside Center, its office tower complex on the river at 444 SW Second Ave. Officials say they’ve outgrown the building. A few years ago, they began to explore a sale or swap with a developer to gain a new main office building elsewhere.
Attorneys for Lancelot Miami River LLC, an affiliate of the Adler Group, and officials with the city’s Department of Real Estate and Asset Management on Monday gave the Miami River Commission a status report.
Negotiations between Adler and the city have been ongoing more than a year, and river commission officials have kept close contact with the city about the fate of the high-profile site.
Michael Llorente, an attorney for Adler, told the commission negotiations had progressed enough to target the August primary election for the proposal, and the parties asked to go on the May 7 agenda. But he said Monday that “upon further reflection,” they agreed to shoot for a November vote, affording more time to work out details and get a full review by all players.
So he asked to meet with the commission’s Urban Infill and Greenways Subcommittee in June, and the river commission July 9. Final approvals will be up to the city commission.
No one objected, and River Commission Chairman Horacio Stuart Aguirre approved that schedule.
In December 2016, city commissioners approved negotiations with Lancelot (Adler), chosen via a request for proposals. Adler proposed to build new offices for the city elsewhere and turn the river site into Nexus Riverside Central – residential towers, a hotel, retail and restaurants.