Advertisement
The Newspaper for the Future of Miami
Connect with us:
Front Page » Top Stories » Construction jobs boom might have short life 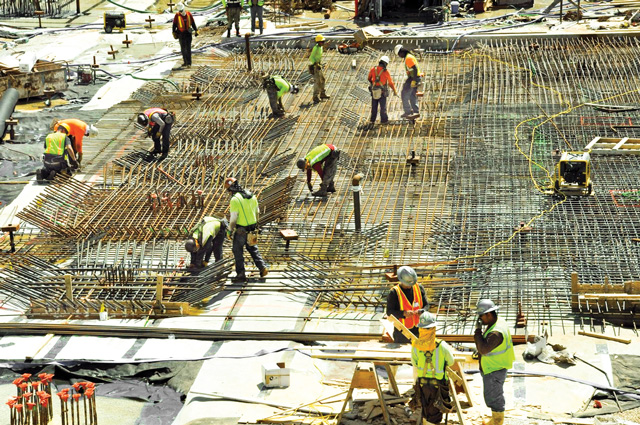 Despite continued growth in construction jobs since the economic collapse in 2007, industry experts predict that construction job growth will start to slow down in the next year or two due to low unemployment rates and tighter hiring markets.
According to a US Bureau of Labor Statistics report, Miami-Dade County saw a peak of 55,300 construction jobs in 2007, followed by a low of 30,100 jobs in 2012 due to the economic collapse.
Since then, according to the report, construction job numbers have slowly climbed back up to 49,800 jobs.
One of the main reasons for this increase, said Manuel Lasaga, president of StratInfo and clinical professor in the Finance Department at Florida International University, has been a relatively stable economy.
“I think that the construction sector has seen such positive momentum due to the economy doing so well,” Mr. Lasaga said. “Last year construction slowed down for a few months in Miami due to Hurricane Irma, but overall the momentum has remained positive.”
However, he said, “with unemployment rates being so low it’s not going to be so easy to find qualified people for future construction projects.”
As for reaching employment levels that peaked in 2007, David Robinson, senior vice president and general manager at Turner Construction, said, “I’m not sure if we will see that type of growth again. However, I think if we do we will be challenged by the demand we saw in 2007.”
One of those challenges, he said, would be the lack of available skilled labor and engineers in the industry.
“There is definitely a need for more skilled labor and engineers in the construction sector,” Mr. Robinson said.
As a result, he said, “we have partnered up with local universities such as Florida International University and Florida Atlantic University to create programs that entice students to work in the construction industry straight out of college.”
“The industry has changed a lot since 2007,” he said. “Nowadays, it’s about doing things more efficiently and effectively through innovative techniques, which in turn reduces the amount of available work since things are getting done better without having to employ as many people.”
However, he said, despite these changes the construction industry will continue to grow and adapt as productivity and output become greater.
As for other trends in construction growth, Jaap Donath, senior vice president of research and strategic planning at the Beacon Council, points to increases in commercial office space and industrial construction as being one of the reasons Miami-Dade County has seen higher growth rates than those in the rest of the state.
“In the last several years office space and industrial construction has really started to grow in Miami,” he said, “plus we have seen a lot of growth as whole in different parts of the community ranging from Doral, Sunny Isles, Aventura and Midtown, which is promising.”
Also, he said, “I think we have seen a lot more activity here due to international connectivity and different companies wanting to do business here.”
Moving forward, he said, “I think construction job growth will continue for another year, but not more. It depends on various factors.”

One Response to Construction jobs boom might have short life