Advertisement
The Newspaper for the Future of Miami
Connect with us:
Front Page » Government » Miami evaluates preparations for hurricane season 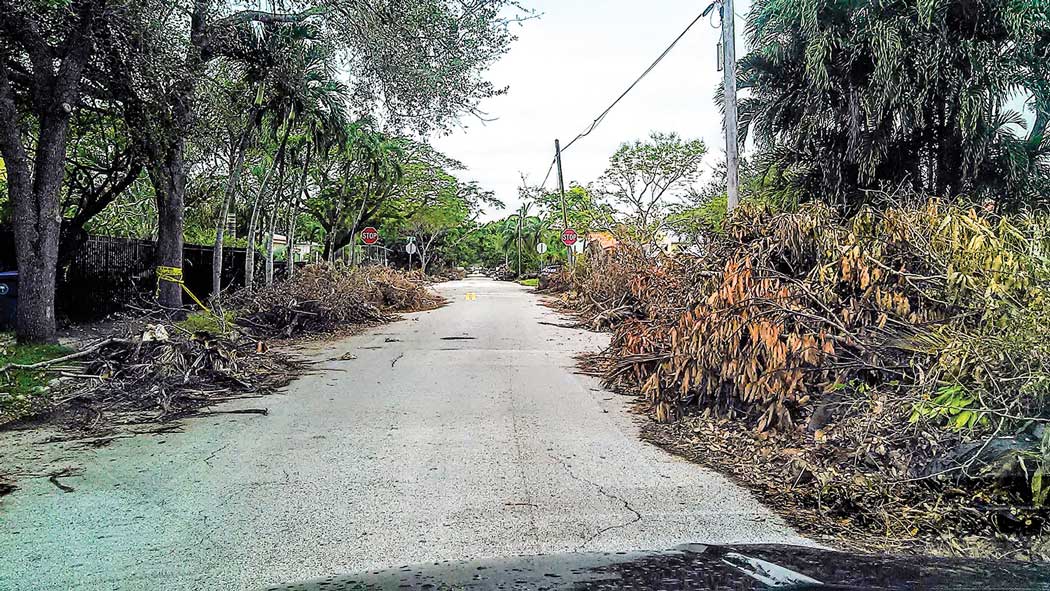 It’s never too early to prepare for hurricane season, particularly if you’re still suffering the consequences of the last one.

That’s the situation officials with the City of Miami find themselves in, six months after Hurricane Irma and about three months before the start of the 2018 season.

“What is our hurricane preparedness plan?” he asked.

Police, fire and emergency officials say they are applying the lessons learned last year to be better prepared for the 2018 season.

Hurricane Irma last Sept. 10 brought  South Florida storm surge and winds that tore through the tree canopy. Much of the region lost electric power, with outages lasting more than two weeks in some areas.

Downed trees, broken branches and other clutter churned up by Irma quickly piled up on the sides of streets citywide.

The city’s own clean-up crews and a fleet of private contractors began to collect the mess, but the process was slow. Compounding the problem, residents began mixing bulk household garbage and debris onto the mounds of trees and branches.

It took more than a month to remove most of the debris from the streets.

On Oct. 17 the city announced it had completed the first pass of debris collection and would be starting the final pass to pick up any leftover hurricane-related debris.

In late October, budget officials calculated a preliminary cost estimate of handling debris from Hurricane Irma at about $73 million, and the city is seeking 90% reimbursement from FEMA (the Federal Emergency Management Agency).

Beyond that, the city-owned and -operated marinas sustained major damage and remain depleted. It wasn’t until the first week of February that the parking lot near the city’s boat launch in Coconut Grove was cleared of rows and rows of sunken vessels damaged by Hurricane Irma.

Mr. Reyes noted that Hurricane Irma was a Category 1 when it made landfall.

He asked: What is the city’s emergency response plan to deal with the impact from dangerous and powerful tropical storms, from the loss of electrical power to downed branches and trees and other debris, along with storm surge flooding and other water damage?

Mr. Reyes said now is the time to start trimming and clearing branches and to cleaning out storm drains.

He said emergency responders have evaluated past practices and how to incorporate those into the lessons learned from Irma.

Pete Gomez, assistant fire chief and emergency manager, told commissioners the department continues to compile information into its “after action report” on the September storm, “with lessons learned, both good and bad … to build on the good and correct the bad.”

Mr. Gomez continued, “Our plan is based on the cooperation among city departments, and we rely on our partners.”

The city has a comprehensive emergency management plan and each city department has operational procedures to follow, he said.

Mr. Reyes said 90% of the electrical outages in September were due to downed branches and trees.

City officials assured commissioners that work is already under way to prepare for hurricane season, from tree trimming to cleaning out city drains.

The city is progressing with its own tree trimming, he said, and Florida Power & Light is also cutting and clearing trees.

Nzeribe Ihekwaba, assistant city manager, reported on the city’s drain clearing, which is under a citywide contract and is a continual year-around process.

In areas that saw flooding last year, namely the Brickell area, new water pumps have been installed, said Mr. Ihekwaba. Pumps on Brickell Avenue and near Mary Brickell Village are designed to alleviate rising waters there, he said.

As for tree trimming procedures, Mr. Ihekwaba said city workers are studying best practices in landscaping and possible amendments to the tree ordinance may be forthcoming.

“I assure you, we have measures in place,” Mr. Ihekwaba said.

“We have to be ready,” stressed Mr. Reyes. He reminded everyone of the danger posed to the elderly, on their own and those living in senior centers, who had to deal with no electricity and therefore no air conditioning.

At the same meeting, commissioners granted preliminary approval to an ordinance to protect the elderly during storms, in response to Hurricane Irma.

The ordinance requires nursing homes and assisted living facilities catering to the elderly to have a plan for emergency power and fuel for generators.

It establishes a citywide requirement that all city-funded facilities, including senior citizen towers, have functioning generators with adequate fuel capable of continuous use to power essentials, including elevators, lights, emergency alarms and air conditioning in the designated rooms; and that resident attendants to the elderly should be on site within 24 hours of a hurricane or storm’s passage, or as soon as safely possible, to ensure adequate care in the aftermath of hurricanes and storms resulting in widespread power outages.

He said he was never more proud of the city than when he witnessed city workers responding to the aftermath of Hurricane Irma.

Mr. Russell said it’s very rare that public works employees and solid waste personnel get to “shine as true heroes,” but that’s what he saw in September, with the massive clean-up efforts citywide.

Commissioner Wifredo “Willy” Gort agreed, saying he was out in the community right after the storm and saw the city employees hard at work.

“I was very proud of our employees. They were very responsive,” Mr. Gort said.

Mr. Reyes mentioned the added burden of residents placing household trash and debris into the piles of branches and other storm-related debris.

He suggested an awareness campaign to remind residents not to put out other household items – like furniture – until trees and branches are removed and the city gets back to its regular bulk waste pickup schedule.

One Response to Miami evaluates preparations for hurricane season