Advertisement
The Newspaper for the Future of Miami
Connect with us:
Front Page » Real Estate » New projects adorn Biscayne Bay at Edgewater 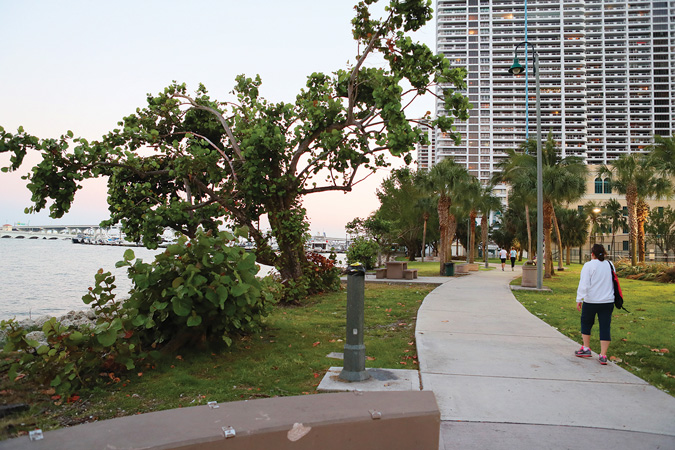 New projects adorn Biscayne Bay at Edgewater. As six developments take a step toward completion, some locals wonder when more goods and services will also follow the real estate boom into the area.

Jaret Turkell understands the growing appeal with the area. Mr. Turkell, the managing director at Holliday Fenoglio Fowler, said, “Location-wise it’s closest to some of the hottest neighborhoods in Miami. Point two is the sweeping wide bay views.”

νThe recently completed 2500 Biscayne, by 2500 Biscayne Property LLC, offers 166 units for rent. The building features 19 floors, 271 parking spaces, and a preserved ground floor retail component constructed during the 1920s. The retail portion once connected to the Wolpert Apartments. Iris Escarra, shareholder and co-chair of the Land Development Group of Greenberg Traurig, said, “It’s in the process right now of filling in. They got their certificate of occupancy so they’re now moving in the tenants.”

νAria on the Bay at 1770 N Bayshore Dr. is to begin closings in the next 30 to 45 days. Nicolás Bárbara, the sales director for the condo at Cervera Real Estate, says 90% of the 648 units are sold, including four commercial spaces. Regular units range from 813 to 2,362 square feet. Developer Melo Group hopes to sell the remaining 70 units this year. Price tags dip as low as $400,000 for one bedrooms and rise to $1.8 million for three bedrooms.

νLuxury condo Elysee at 788 NE 23rd St. offers 100 units, 50 of which are sold. Two Roads Development plans to complete the project in 2019. The three- to five-bedroom units spread across 57 floors, start at $1.5 million.

νMill Creek Residential expects to complete its market-rate rental building by December. Ryan Bailine, shareholder at Greenberg Traurig, said, “Mill Creek and their partners saw the opportunity to get in at the ground level in one of the many emerging neighborhoods in Miami and Edgewater provided an attractive opportunity.”

νDevelopers for Missoni Baia at 777 NE 26th Terr. expect to complete construction by fall 2020. Developers OKO Group LLC, OB Group, and Cain International plan to include 249 units of one to four bedrooms at prices ranging from $550,000 to $3.5 million. Condo units vary from 1,100 to over 3,000 square feet at $650 per square foot. Workers broke ground in October and now the project moves skyward. Edgardo Defortuna, president and CEO of Fortune International Group, said: “We’ve very happy with the sales process and construction progress.”

One of the eight townhomes of Paraiso Bay Homes remains available. The homes face the water, Michael Schwartz’s Amara restaurant, and a soon-to-debut public park. The park will replace the current sales office on site.

Carlos Rosso, president of the condo division at Related Group, said, “It gives that sort of neighborhood scale.”

Chef and owner of Amara Mr. Schwartz sees reservations climbing and remaining steady. At one point, his restaurant seated 400 per night, spacing out reservations every 15 to 20 minutes so as to not overwhelm his staff. He said, “Business has been great. As the word starts to get out that this exists and when residents move in, we expect it to just be busier and busier.”

Newly completed projects experience continued interest. Karen Elmir, CEO of Elmir Group with Cervera Real Estate, sees such attention at Biscayne Beach Residences. The condo building sits at 2900 NE Seventh Ave. All the resale units range from $400,000 for a one-bedroom to $2.5 million for four bedrooms; the two penthouses, providing two floors, a private elevator and a pool, sell for $9.4 million and $10.5 million for over 10,000 square feet.

She says one big draw is the location central to the trendier neighborhoods and the access to the MacArthur Causeway.

Despite an injection of new real estate projects, neighborhood attention often shifts to the lack of goods and services.

One proposed addition includes a bayfront walkway. Mr. Rosso continues to push for such a vision with the Biscayne Line project, spanning Northeast 36th Street to Museum Park.

Mr. Rosso said, “There’s a misconception that private access to the water makes it more valuable. But when you go to places like Central Park or Ipanema in Rio de Janeiro what makes it more valuable is that people are walking in front of the buildings, look back, and say, ‘Wow, I wish I could live here.’”

Commissioner Ken Russell supports the plan. In a statement, Mr. Russell wrote: “I sponsored an ordinance that would allow the city to obtain an easement and construct the Baywalk in advance of any redevelopment on these properties, and to obtain a reimbursement from the property owner when the land is redeveloped in the future.” The city commission didn’t approve his offering, but Mr. Russell said he hopes to propose more legislation on the matter.

Besides a Baywalk, Madeleine Romanello, broker associate at Compass, says the area also needs large workspaces, another supermarket and a public school that can sustain the area’s current growth.

President of Biscayne Neighborhoods Association Andres Althabe agrees that a public school is critical to maintaining the influx of growth. “We have been in conversation with the school board trying to open other options for public schools that are not just charter,” he said. Some money is promised for a new site, he said, but the process is not moving fast enough. “I know people who are moving to other neighborhoods like Coral Gables because of schools. To keep this real estate cycle going, we have to give them school options.”

One small step might make a difference. Alicia Cervera, managing partner at Cervera Real Estate, said, “The east Edgewater neighborhood is transforming hugely from what was a single-family home neighborhood to a high-rise vertical community with very high-end residences. That has to be supported by good zoning guidelines and enforcement of ordinances that allow for clean, healthy living.”

Maintaining the area’s large population of ducks may be one place to start, Ms. Cervera said. “This is a neighborhood filled with ducks, which can be turned into something positive. As Coconut Grove has the peacocks, maybe there needs to be a duck patrol.”

Other needs and services are waiting to be met, such as a local library. Director of the Miami-Dade Public Library system Ray Baker said, “I wouldn’t say we have the budget to have a library in every growing neighborhood of the entire county. Any opportunities where a developer or someone is offering very low-cost space or even free space is something that would help us along in terms of being able to start planning a new service point.”

Taylor Collins, managing partner at Two Roads Development, remains hopeful. “What’s funny about real estate development is commercial always follows residential,” he said. “If you want new commercial, the residential has to go in, then the restaurants and stuff like that.”

One Response to New projects adorn Biscayne Bay at Edgewater