Advertisement
The Newspaper for the Future of Miami
Connect with us:
Front Page » Government » Miami Parking Authority victim of heavy traffic 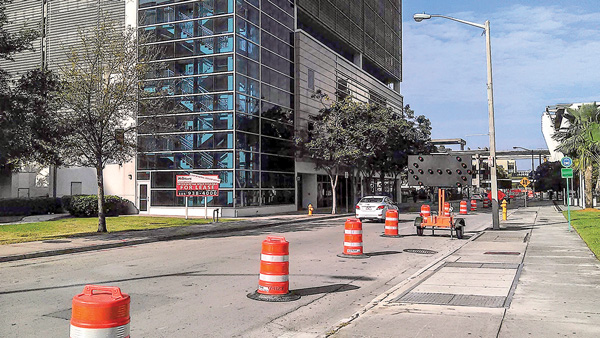 Officials with the Miami Parking Authority are working on measures to ease anticipated traffic congestion around its flagship garage and headquarters, Courthouse Center Garage at 40 NW Third St.

This preemptive planning is occurring as construction is about to commence on the vacant corner adjacent to the garage, which will be home to Grand Station, a mixed-use residential tower.

The project is a major public-private partnership.

The parking agency owns the land and has an agreement with Grand Station Partners LLC to build the project.

“We are rollin,’” said Art Noriega, authority CEO, in comments to the Off-Street Parking Board at its March meeting.

Mr. Noriega said they are finalizing logistics for the Grand Station project and are to begin site work soon.

He said there is concern the added construction will worsen existing traffic congestion in that area of downtown, noting that MiamiCentral, the massive transportation station, is under construction a half-block away.

The private venture will be home to the Brightline passenger rail service, and eventually include apartments, offices and retail uses.

“I have a little concern, with Brightline coming in, there’s so much construction there may be a little gridlock,” said Mr. Noriega. The Courthouse Center Garage, with its centralized location, is heavily used and the authority wants to keep its customers happy.

“It could be hard to get around – we’re being hypersensitive to that and it’s something we’re working hard on,” he told the board.

“We are being extra vigilant on how the traffic management plan is done,” Mr. Noriega said.

The work on MiamiCentral has impacted traffic patterns for years, with portions of Northwest First Avenue and Northwest Fifth Street closed to public use.

Brightline hopes to begin rail service from MiamiCentral at the end of April, but the construction is far from over. Stores, offices and residential towers growing as part of MiamiCentral will continue for some time.

Opened in 2010, Courthouse Center Garage is a public parking facility with upper and lower office space and some ground-floor retail. The largest office user in the building is the parking agency itself, in about 10,000 square feet on the top floor.

Vehicles can access the parking levels from Northwest Third and Second streets.

Grand Station is to rise on the adjoining corner property, 240 N Miami Ave., an undeveloped site that has been home to grass, sidewalks and small trees.

As for the new building, Grand Station will have an 8-story pedestal of new parking with about 376 spaces, tied into the existing 11-story garage. The main portion of the project is a 33-story residential tower identified as multi-family with about 258 apartments.

The new building will also have about 5,000 square feet of ground floor retail uses.