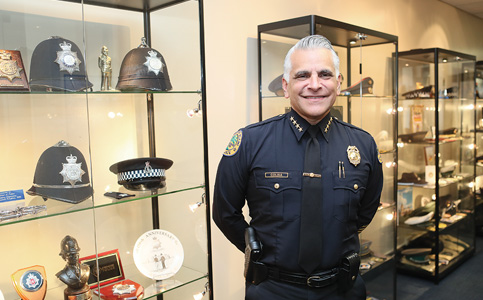 Chief of the City of Miami Police Department Jorge Colina was sworn in Jan. 26 but he’s hardly a new face, having been in the department for 27 years – his entire career.

Not long after taking over in this position, the Feb. 14 shootings with 17 deaths happened in Parkland. Mr. Colina said police officers in Miami are trained to deal with active shooters and the department offers active shooter training to organizations, groups and schools.

Mr. Colina said he’s deeply committed to Miami and its residents, with his top priority being gun violence. When you live in a place as beautiful as Miami, he said, you shouldn’t be afraid to go outside, and he wants to help make that reality.

The chief always thought it seemed like a great job to be in law enforcement. He began college as a history major but one day told his girlfriend – now his wife – he wanted to be a policeman. She said to do whatever made him happy, so he went off to the academy.

Miami Today reporter Susan Danseyar interviewed Mr. Colina at the police department. The interview was recorded by Jahmoukie Dayle, and can be found at http://bit.ly/2uNHy0Q.