Advertisement
The Newspaper for the Future of Miami
Connect with us:
Front Page » Top Stories » Economics shelves FPL nuclear units at Turkey Point 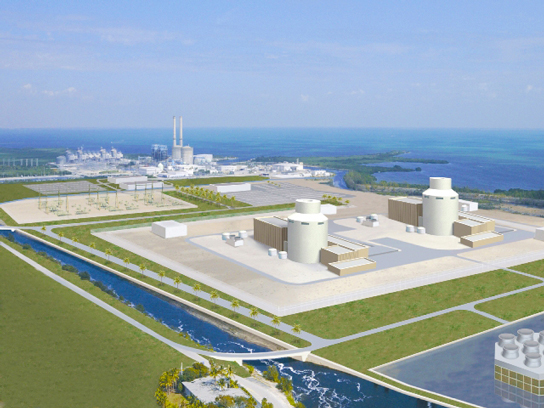 Nuclear units Florida Power & Light was to build at Turkey Point have been delayed indefinitely as it’s too expensive to compete with natural gas, FPL says.

In 2010, the county agreed with FPL to build two new nuclear units at Turkey Point and treat 90 million gallons daily of reclaimed water to cool them.

But “conditions have changed, and the units will not be constructed in the foreseeable future,” Mayor Carlos Giménez said in a memo to commissioners. At the Chairman’s Policy Council last week, he said FPL is opting to extend the life of its existing nuclear units, holding off construction. He said the existing Turkey Point units are maintained in “like new” condition and it isn’t smart to move forward with the new nuclear plants now.

Mr. Scroggs said it is “good news” as FPL can now focus on the new agreement with the county to reclaim 60 million gallons of wastewater to relieve pressure on the aquifers.

The price of natural gas has dropped drastically since the units were planned, Mr. Scroggs said, and expensive new reactors can’t compete. Previously, “hurricanes drove up the natural gas prices to $10 per million MMBtu, whereas now that price is about $2.50, or 25% less than the other fuel,” he said. One million Btu is about 1,000 cubic feet of natural gas. The existing reactors have been paid for so it is a low-cost alternative to extend their lifespan, he said.

Mr. Giménez said delaying the nuclear plants indefinitely will save ratepayers money. “You’re talking about billions of billions of dollars that we will avoid,” he said.

FPL says it isn’t yet giving up on the new units, but Mr. Giménez said “FPL is going to try to move on these two units, but I’m not sure they’re ever going to get built.”