Advertisement
The Newspaper for the Future of Miami
Connect with us:
Front Page » Top Stories » 20 largest office buildings paid $51 million in taxes 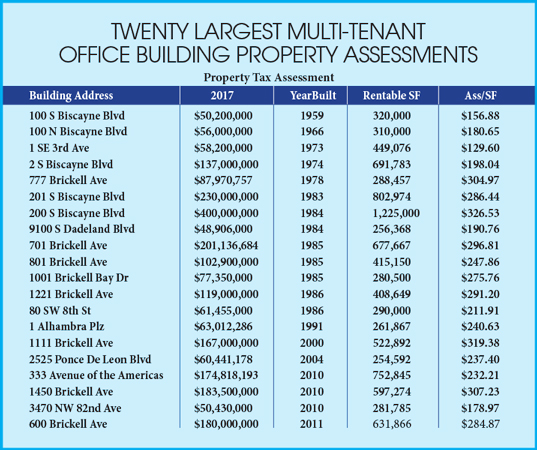 Property owners might gain new appreciation for large office buildings nearby as a result of new research that indicates office towers offset real estate tax obligations for surrounding properties while also providing revenue for the county.

Reviewing the 20 largest multi-tenant properties within Miami-Dade, findings show how the investment per square foot of rentable space changed from 2016 to 2017. Mr. Dixon sees factors such as a building’s age and whether it was recently sold as influencing its property taxes.

“There is a relationship between the assessment value and what properties sell for,” Mr. Dixon said. “When office buildings sell in the current year or the prior year, it is generally reflected in changes in the assessment.”

He looks at 777 Brickell Ave. as a prime example. “That’s assessed for $304 per square foot of rentable space, but it sold for $140 million, which is substantially higher than the assessment of [approximately] $87 million,” he said.

Office buildings in Brickell and downtown generate the most revenue for the county. Mr. Dixon points to the largest contributor at 200 S Biscayne Blvd., assessed at $263 million in 2016 and rising to $400 million in 2017, for providing about $8 million in taxes.

Redevelopment can be good since it increases community revenues while not adding the social costs that a given residential building might with residents demanding services.

“As long as the buildings that are being built don’t incur social costs, it’s a wonderful thing,” Mr. Dixon said. “A community that has a large base of office and commercial buildings meets the burden of maintaining the government revenue and not necessarily on people’s individual homes or apartments.”

His findings indicate the importance of large office spaces for a strong community. He said he hopes others take note: “Appreciate the office buildings that we’ve got and encourage more of them if they’re economically justified.”