Advertisement
The Newspaper for the Future of Miami
Connect with us:
Front Page » Business & Finance » Macy’s on Flagler Street to get 50-story towers on either side 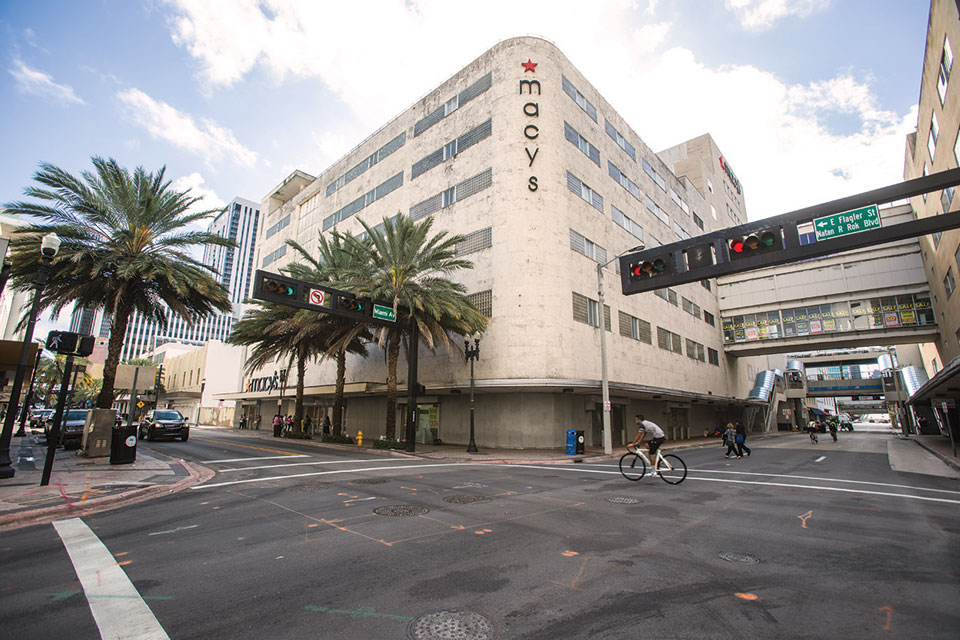 Plans to possibly renovate the historic Macy’s on Flagler Street downtown are in early developmental phases with the addition of two adjacent 50- to 55-story buildings that are to be built from the ground up as well.

This Macy’s, long considered one of downtown Miami’s landmarks, is to close this year as part of the corporation’s nationwide cutback plan. Aetna Realty Group bought the building in 2013 and plans to renovate it as well as build two new buildings, one on each side of it.

“That particular site, being right next to people mover and right off of Flagler, is a very important site for downtown Miami and we’re working to maximize the uses and types of tenants that are going to be coming into the area,” said David Braka, vice president of Aetna Realty. “We’re trying to finalize the retail.”

According to Mr. Braka, the first few floors of all the buildings will be retail with the upper floors being a mixture of offices, a hotel and residences.

“We’re still in talks with various different developers for all of the various different uses we’re looking into putting in the buildings, and we’re hoping within in the next three years it’ll be in the ground with potential building going on,” he said. “Hopefully everything goes to plan and hopefully within three years we’ll be there.”

Aetna Realty Group wants to build the two new towers primarily, Mr. Braka said, because the company sees the idea of a building that’s customizable to its taste as a plus.

“There are plans to keep the original building, but most of the engineers and the architects are guiding us to a new building,” he said. “There aren’t any necessary problems with the old building, but the benefit of starting brand new is you can build it how you want it to satisfy the tenants’ needs.”

One of the main reasons the corporation is looking to provide residences, Mr. Braka said, is because “the area is truly becoming more of a neighborhood, versus before it was mainly offices and commercial properties. Now there’s a lot of residences in the area and I think there’s going to be a lot of demand.”

Randy Olen, a principal at Foundry Commercial and a member of Miami’s Downtown Development Authority who is not involved in the Macy’s project, said the market in downtown Miami is good now and will continue to get better, which in turn means the building would probably work well as a space for offices on its higher floors.

“Downtown is vibrant and it’s active, and I think the building itself could be very cool, but it all depends on one single factor, which is the cost to convert the building,” he said. “If it costs $100 a square foot to convert it to office space, that means you now need to account for that as well as elevators and other things.”

As of now, the projected amounts that the new buildings and the possible renovation will cost are still being calculated.

“We are in the process of defining all of the parts and getting estimates to see how much it would be,” Mr. Braka said.

The next step for this project is for the corporation to speak to different developers for the different parts of the buildings. Currently, some retail companies have contacted Aetna Realty, but names won’t be released until specific companies are picked.

“There are a few companies out there that are approaching us, but right now it’s still in the beginning stages,” Mr. Braka said.

Jacqueline King, manager of South media relations for Macy’s, wrote in an email that 105 Macy’s employees will be impacted by the store closing.

“While closing a store is always a difficult decision because of the impact on our customers, our associates and the community, Macy’s is delighted to have served this community over the years,” she wrote. “We deeply appreciate the loyalty of our customers and associates and remain committed to the greater Miami area.”

Mr. Braka said he believes one of the biggest positives that will come out of this project is that it will “fill the void now that Macy’s is leaving.”