Advertisement
The Newspaper for the Future of Miami
Connect with us:
Front Page » Government » Coast Guard weighs regulations for boat race at Miami Marine Stadium 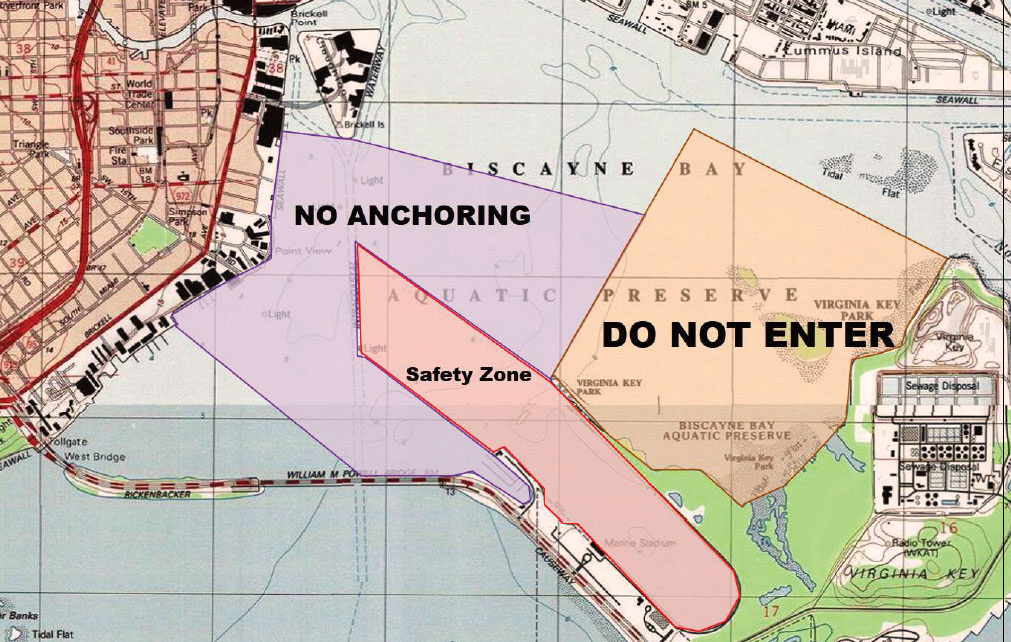 The Coast Guard is considering a local regulatory plan for a speed boat race planned for April in the historic Miami Marine Stadium basin of Virginia Key.

As part of the process, the public is encouraged to comment on the event via a federal website.

As of Tuesday, three comments had been posted, two specifically objecting to the event being held in the basin and a third noting that the basin is a refuge for manatees and dolphins.

Comments and related material must be received by April 2. The website is https://www.regulations.gov/ and the event docket number is USCG-2017-1076.

A summary of the proposed rulemaking says the Coast Guard proposes to establish a special local regulation (SLR) for the Miami Grand Prix of the Sea.

“This action is necessary to provide for the safety of the public, spectators, vessels, and marine environment from potential hazards during high-speed, offshore-style boat and Personal Water Craft (PWC) races during the Miami Grand Prix of the Sea,” it reads.

Powerboat P1 USA LLC laid out its plan for the Miami P1 Grand Prix of the Sea at a meeting last week of the Virginia Key Advisory Board.

Plans filed with the City of Miami – which owns the stadium and basin – show the event is planned with setup Friday, April 20, and racing Saturday and Sunday, April 21 and 22.

The organization said the Miami event will open its 2018 P1 USA Championship racing season, will be televised and will be free to view.

The advisory board supported the event.

A few residents spoke against holding the event in the basin, saying it is not the appropriate place for such a high-impact activity.

One was Joyce Landry, a rower who has used the basin for years. She was one of the first to post her opposition on the Coast Guard website, saying: “I am opposed to the use of the Virginia Key Basin for the Miami Grand Prix of the Seas. There hasn’t been a speed boat race in the basin for 28 years and the environment has changed dramatically since then. The area has become a sanctuary and breeding ground for Great Blue Heron, dolphins, manatees, rays, tarpon and other wildlife. Because of the no-wake zone and low impact of the area, the wildlife have adopted this area and I think it is a mistake to allow this race to continue. The basin should be preserved for passive water sports only.”

The comment of Steven Leidner, the Sierra Club’s representative recently appointed to the Virginia Key Advisory Board, began with the word: “NO!”

He listed 10 reasons including that the basin is environmentally sensitive, is best utilized for non-motorized boating, the boat show already limits public access to the basin for multiple months, “safety of hovering helicopter above crowds and effect on wildlife/ Bill Sadowski Critical Wildlife area that abuts basin,” the race would establish a precedent for more motorized basin usage, and more.

Mr. Leidner was at the Feb. 27 advisory board meeting, where the vote to support the race was 6 to 1. Mr. Leidner told Miami Today he abstained as he is a new member and didn’t feel he had all the facts.

As we reported last week, Peter Ehrlich voted to oppose the event.

Robert Mahoney posted a comment on the website about the special nature of the basin: “The Marine Stadium basin eco-system has restored itself – with increased seagrass and other marine resources. The State of Florida designated the Sadowski Critical Wildlife Area along the basin shoreline. The Marine Stadium basin is a refuge for manatees and dolphins, which are frequently seen in the area.”

On the website is a Coast Guard National Environmental Policy Act Record of Environmental Consideration. It says that as a condition of the permit, the sponsor agreed to protection measures designed to mitigate impacts to marine life and seagrass.

Among the protection measures is a requirement for aerial, on-water and landside manatee observers during the event with the authority to halt the race should a manatee or sea turtle come within certain distances of the event.

“Based on a phone conversation with Miami-Dade County Environmental Resources Management (DERM), the agency is likely to issue an Administrative Authorization based on the assumption the event will have ‘no environmental impacts’. The Administrative Authorization will carry conditions to mitigate concerns over manatee protection,” the record says.

Another measure requires a 5-foot clearance between a vessel’s propeller and sea bottom. Depth within the basin ranges from 7 to 12 feet. Furthermore, safety and no-anchoring zones outside the basin will prohibit spectator vessels from anchoring over seagrass during the event.

“In an email dated Feb. 14, 2018, National Oceanic and Atmospheric Administration (NOAA) indicated they ‘would not expect the racing activity to impact seagrasses considering they are able to maintain 5 feet from the prop and the bottom and operating in 7-9 feet of water,’” the record says.

The document also notes: “The Miami Marine Stadium was built in 1963 specifically for water sporting events and powerboat races.”

The city closed the stadium in 1992 in the wake of Hurricane Andrew, but has launched a multi-million-dollar restoration project.