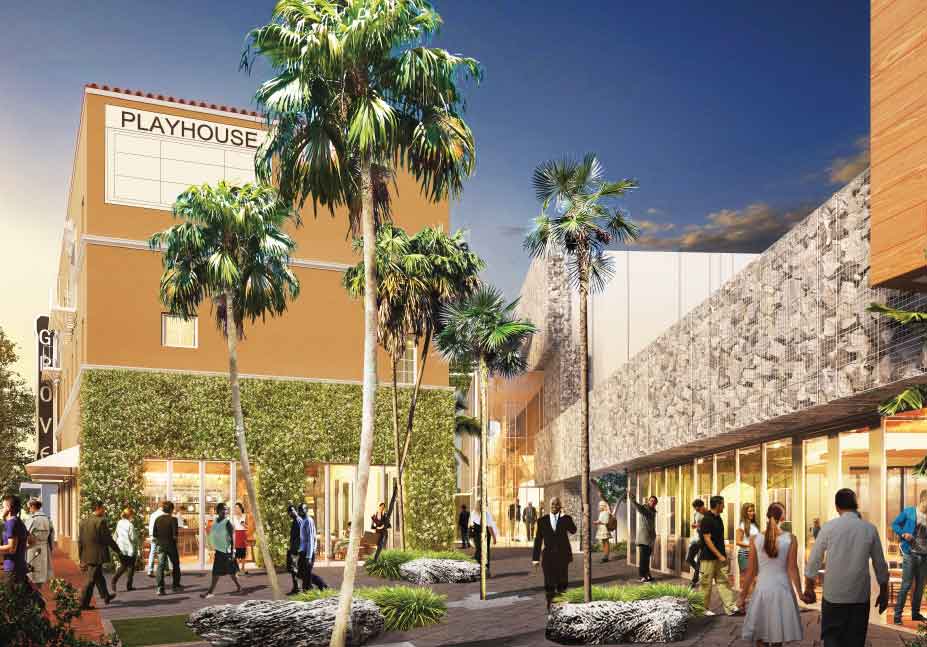 The plan to restore the long-shuttered Coconut Grove Playhouse has been approved by Miami’s Urban Development Review Board.

Miami-Dade County plans to restore the front of the historic theater, build a new 300-seat theater and ancillary uses on the footprint of the large and dilapidated auditorium, and be a partner in a plan for a public parking garage with residential units and retail shops.

The city’s review board on Feb. 21 voted 6-0 to recommend approval of the restoration project as presented, many complimenting the design to revive the famous venue.

The site at 3500 Main Highway in the Grove has been closed more than a decade, as state, county and city officials debated its fate. The theater is owned by the state and leased to Miami-Dade County and Florida International University.

The county-approved redevelopment plan would basically save and restore the front of the theater – sometimes referred to as the eyebrow due to its angular shape – and demolish the larger auditorium and build a state-of-the-art theater with about 300 seats, to be operated and programmed by GableStage Inc.

Bernardo Fort-Brescia, founding principal of the Arquitectonica architectural firm, made a presentation of the county’s plan to the review board that included new renderings of elevations showing views of the development site from several directions.

Along with the colorful images, site plans offer some details that will go into a new community theater on the property.

Mr. Fort-Brescia spoke of the history of the theater, and its evolution from a movie house to a dinner theater to a regional theater. He mentioned a series of renovations over the years, including major renovations in 1958 and 1982.

“The most historic value will be restored,” said Mr. Fort-Brescia.

A site plan shows the front three-story building (the eyebrow) renovated to house the box office and retail and dining on the first floor, offices on the second floor and livings units on the third floor.

A courtyard is planned between the front building and the theater, offering a staging area of sorts for theater patrons as they wait to enter the theater and as they leave. Historically, when the theater was successful the ticketholders often spilled out into the street awaiting entrance to the theater, according to Mr. Fort-Brescia.

A site plan shows the layout for the new theater with 311 seats in the auditorium. The structure also has a mezzanine, lobby area and concessions.

A PowerPoint presentation referred to several historical architectural features to be preserved or recreated, including the arches in the auditorium.

The plan shows about 300 parking spaces provided, with retail and residential units in the garage, to be built behind the theater adjacent to the alley that is the extension of Thomas Avenue.

Some review board members weren’t happy about the design of the garage with three lanes of traffic coming in off of Main Highway. The design is for three lanes in at one time, and three lanes out, for major events at the theater, said Mr. Fort-Brescia.

The property’s unusual shape, a bit triangular, and its location sandwiched by Main Highway, Charles Avenue and an alley, reduced the number of options for traffic flow patterns as they relate to the garage, he said.

Board member Neil Hall said he was very pleased by the plan, and “it’s nice to see historic theater come back to life” for the area.

Mr. Hall particularly liked the planned courtyard by the main lobby, saying it will serve to bring wonderful activation to that space.

“This is more than just a renovation,” said board member Ignacio Permuy, calling the plan to restore the landmark site refreshing. “I only have good things to say about this building,” he said.

Board member Gerald Marston, who lives in the Grove and said he drives by the playhouse daily, also spoke in support of the restoration plan.

“Congratulations,” he said to Mr. Fort-Brescia, “you’ve convinced me the one piece in front is worth saving.”

Board member Dean Lewis said the project has a good scale, is playful and appropriate. “It’s a tricky site. It’s a tricky project … my vote is yes,” he said.

Some preservationists have been fighting to save the entire existing building, including the large auditorium, and some have supported third-party plans for a much larger theater.

The county’s plan is headed to the city’s Planning, Zoning and Appeals Board and the Historic and Environmental Preservation Board.

The aging theater shut down in 2006 after financial woes strapped the group in charge.

The Mediterranean Revival-style theater, built in 1926, had been acquired by the state in 1980, when it agreed to purchase its $1.5 million mortgage, according to a Miami city report on the site.

Originally, the theater could seat 1,500 patrons and the building housed seven storefronts on the ground floor, 10 offices on the second and apartments on the third.