Advertisement
The Newspaper for the Future of Miami
Connect with us:
Front Page » Top Stories » CNG buses start to fuel Miami-Dade transit gains 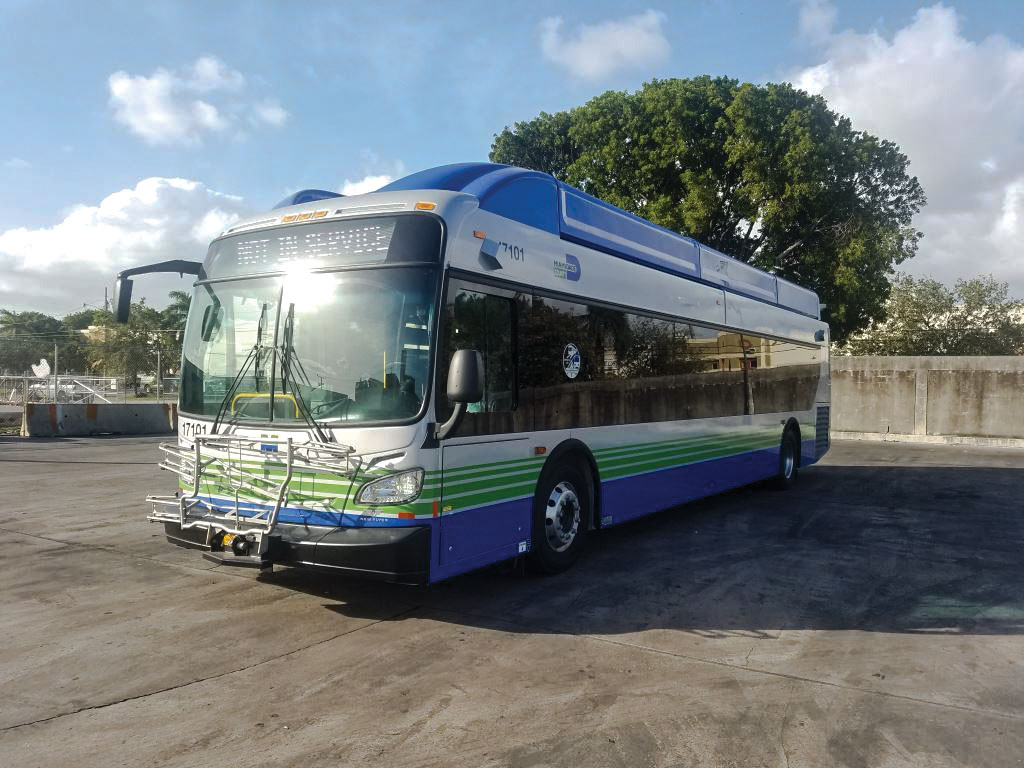 Trillium CNG has delivered a temporary fueling station to the Miami-Dade County Department of Transportation and Public Works, and the start of a fleet of new county buses is running on compressed natural gas, or CNG, refueling at 3300 NW 32nd Ave., as more buses are due.
The county received its first up-to-date standard, 44-foot-long bus in January and expects to welcome more of them this month.
Department Director Alice Bravo said the fleet will improve the current transportation system.
“This represents a massive investment into our existing transportation system,” she said. “Everybody focuses on expansion, but it’s equally, if not more, important to maintain your existing system running well.”
Ms. Bravo said she expects the new features included in the buses to improve the reliability of the current transportation system as well as decrease the county’s carbon footprint.
“Our real-time information on the MDT Tracker App will be more accurate,” she said, “and since they’re [running on] compressed natural gas, they’re better for the environment.”
Trillium CNG takes care of delivering the buses and maintaining the current station. The county thus far, Ms. Bravo says, feels content with the performance of the turnkey operation.
“We’ve learned that things are more efficient when you hire the private sector entity and put the responsibility of coordination on them,” she said. “It makes them the integrator of the different components. That way, we get a guaranteed end product and we’re not dealing with claims and change orders.”
The county learned to leave such operations to the private sector after playing the middleman to similar projects in the past, Ms. Bravo said.
Training of bus operators for the CNG fleets and fueling personnel for the temporary site continues, Ms. Bravo said. “We have a lot of bus drivers. We have to do that in the right-size group so we don’t impact service while we’re training.”
The county is to receive more of the CNG buses this week. Ms. Bravo said the department expects arrivals of five to 10 per week in the coming months. An estimated total of 200 new buses is expected by the end of the year.